Prior to the 1999 season, exactly 22 years ago today, the Pittsburgh Pirates traded second baseman Tony Womack to the Arizona Diamondbacks. So today we look at his 1999 Topps card. 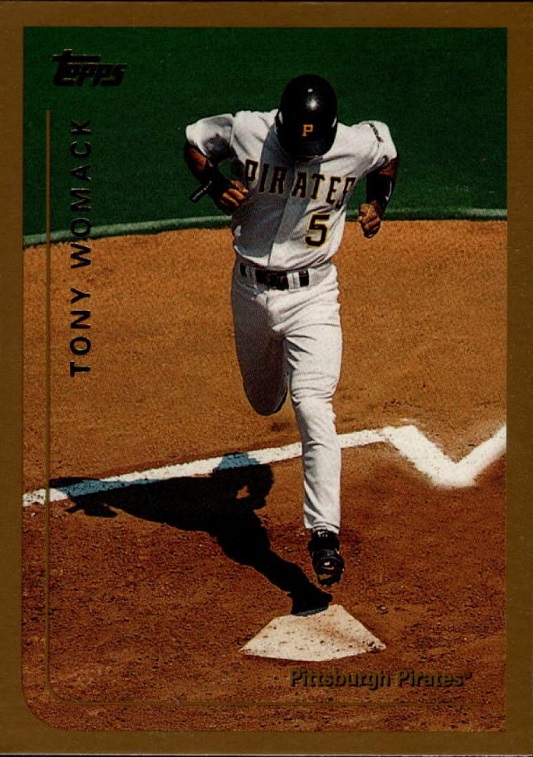 I went into this selection without any idea which card I would use for today’s article, other than a card showing him on the Pirates of course. The 1999/1999 similarity is just a coincidence, because I picked the card that caught my eye. Womack has a lot of great options though, so I’m sure you’ll see him here again in the future. As for this card, there is a lot to like about it. The first thing I noticed is the unique angle on the photo. Most action shots from games are taken at field level, so you wouldn’t get a shot like this one. I always prefer action shots over posed action or portrait style, so this one fits the bill. I like how they isolated Womack on the photo, as if he’s the only one out there, even though a lot is going on at this time with runners and defenders in motion, the crowd in the stands, teammates cheering on, yet it’s just Womack and his shadow in this photo. Speaking of the shadow, how great is that timing, with the shadow just beating him to home plate to score ahead of him. The only odd thing about this photo selection, which I don’t mind, is that his face is completely hidden. You usually don’t see that on cards. The #5 on the jersey is the Womack indicator in this instance. He wore #51 when he first joined the Pirates, but switched to #5 during the 1997 season.

The 1999 set didn’t really have a fancy design, but the gold border now reminds me more of an insert card than the design for the regular series. Topps has been using gold borders (or something gold foil on front) for special cards for a while now and this has the feel of a special card. 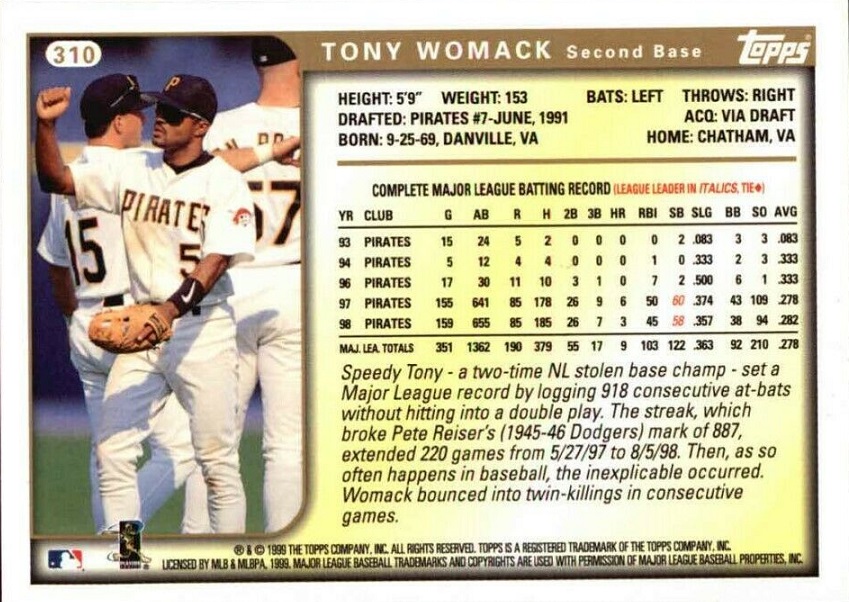 The front didn’t have a good shot of Womack’s face like you would expect, but they included a photo on the back of 1999 cards as well. I guess that allowed them to take some liberties with how they normally went about things, getting a great action shot and still showing the player in a way he can be recognized. The back has his complete big league stats for his first five years in the majors. The short career up to that point allows for a nice bio section, which includes Womack’s record for not hitting into double plays, followed by the fact that he did it in back-to-back games once the streak was broken. Topps also highlighted statistical categories where players led the league, as you can see with the stolen bases here. Womack would set a career high with 72 stolen bases in 1999.

If you want this card, it’s easy to find on Ebay and you’ll pay about $2, including the shipping. As I’ve mentioned before, a lot of newer commons can be found from sellers who list them all from one set in one auction and you have to select the player from a dropdown screen. Basically, there are a lot more options to buy this card than you would see from the photo proof. This same photo was used on the Topps Chrome set, offering you another option here without paying any extra. I personally like the regular issue better, but Chrome was very popular when they came out, so you might prefer that instead.