Today’s Card of the Day celebrates the greatest shortstop in baseball history, who was born on this date in 1874 in Chartiers, Pennsylvania. Honus Wagner played for the Pittsburgh Pirates from 1900 until 1917, putting up 120.1 WAR during that time. That alone would put him as the 14th highest WAR all-time, but he also played his first three seasons in the majors with the Louisville Colonels, before coming to the Pirates in one of the biggest trades in baseball history. Wagner is also pictured on one of the most valuable cards in the world as part of the T206 set. I have yet to feature that particular card here, but it will get the top billing one day. Everyone who has collected cards seriously, and even many people who have never collected cards, have heard of the T206 Wagner. Multiple copies have sold for over $1,000,000. That alone makes it unattainable for 99.99% of collectors, while other may have the money and desire to purchase one, but they are unable to find one for sale. I wanted to feature a card here today that more than 0.01% of collectors can afford, so today we look at the E102 Honus Wagner. 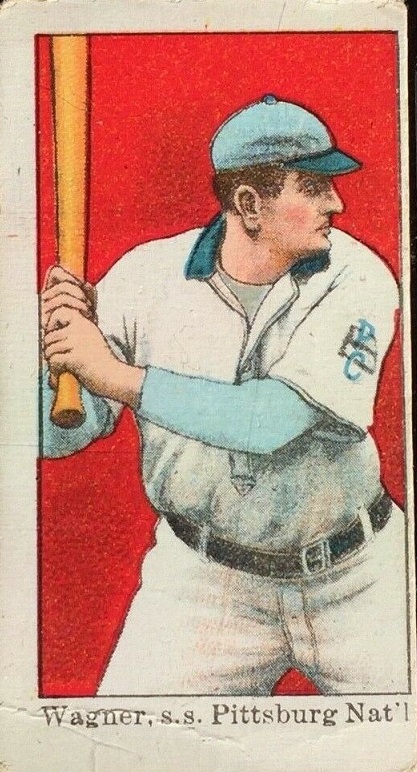 This card is listed many places as being from 1908, though no year was printed on the card. The actual date is either 1909 or 1910 and comes from the players listed on the back and the teams that they represent on the card. Germany Schaefer was traded to the Washington Senators in August of 1909 and he’s in the set on Washington, so that’s the earliest printing date for the set. This photo of Wagner could have been a giveaway that it probably wasn’t printed in 1908, though it doesn’t rule it out. The patch on his sleeve is the iconic “PBC” symbol found on the 1909 World Series jersey. That patch was first introduced during the 1908 season, so they wouldn’t have had that patch on a card before he was actually photographed in that uniform, which means mid-April at the absolute earliest for the photo. Giving some time for the photo to circulate, the printing idea, artwork, actual printing and distribution and the 1908 date should have seemed unlikely. Also, there’s this little part about Dots Miller being in the set, a rookie on the 1909 team.

This photo was heavily recycled during this era in plenty of sets. This particular set is identifiable by the back, so let’s skip to that part. 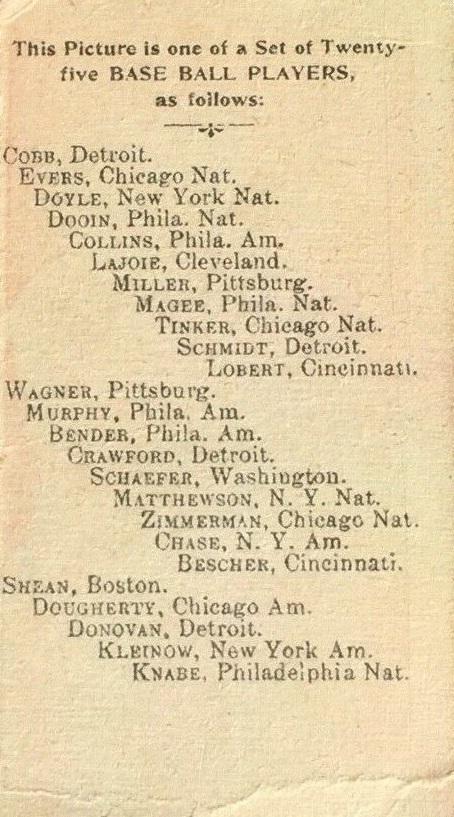 You can tell this is an E102 by the back checklist, along with the fact that it has no advertising. The lack of a product on the back gets this set the name “anonymous” at times. There’s another anonymous set called E101, but that features 50 players in the set. This particular photo was used in sets that advertised candies, caramel, cocoa and gum. The “E” stands for early candy cards, while the 102 is a random catalog number made up when the sets were first organized. You can find this card in sets designated E90-1, E92, E101, E105, E106, D303 and T216. The D set was a bread company, while the T set was a tobacco company called Kotton, which I’m sure Wagner didn’t care for due to his dislike of being associated with tobacco.

This checklist shows that this set had some true firepower that withstood the test of time. Wagner is obviously an all-time great, as are Ty Cobb and Christy Mathewson (his name is misspelled on the card). You also have Hall of Famers Nap Lajoie, Chief Bender, Eddie Collins, Sam Crawford, Johnny Evers and Joe Tinker. Not a bad percentage if you ask me.

There’s also Hal Chase, who was dogged by allegations of betting/gambling on games and was basically blackballed from the majors while still a strong player. Chase was probably destined for the Hall of Fame before that all went down. You might go look at his numbers and disagree, but he was considered by many to be the best first baseman of his era. His dWAR yearly ratings on Baseball-Reference are one of the craziest numbers you’ll ever see because he’s given a -15.3 dWAR, which is almost historically bad. No one who saw him play would agree with that (besides the fact that they would have no idea what dWAR was back then). I’d believe a 15.3 dWAR for him before I’d believe a negative numbers, even -0.1. Sorry for the random off-topic, but when else will his name come up on this site. I have to get these things out there otherwise they just rattle around in my brain.

This particular card is a scan of one that is graded SGC 40 and it’s for sale on Ebay for $3,750. There’s another lower grade one (PSA 1) for $2,500. Let’s face it, if you’re actually interested in buying it, then you’ve got the money to spend and you’re better off with the high grade one. Then there’s a card in the other direction, with a PSA 5 with an $8,745 price tag. If you want the E102 card, then you’re not going to get many chances to buy it. It’s a very rare card. However, the other sets mentioned above that use this same exact pose/color design are much easier to find as a group and give you plenty of options. There’s an E92 Dockman in the same condition for $3,500 and it has a better back design in my opinion. There’s another E92 for $4,000 in a PSA 2, but it has a best offer option so it can be had for cheaper. There’s also an E101 graded PSA 5 that is going for five figures if you’ve got money to burn, though I imagine that you wouldn’t financially regret the purchase if you had to sell the card in the future. Finally, the E105 Mello Mint card has an Ebay option as well. It’s a very tough card to find and that’s reflected in the price (SGC 30 for $6,050).