A few weeks back I did some Card of the Day articles that featured players who were overlooked in the first 100 or so articles in this series. One of those players who remained overlooked was Bobby Bonilla, so there’s no better day than today to give him his first Card of the Day article. Bonilla, who played for the 1986-91 Pittsburgh Pirates, turns 58 years old today. This is not only the first Bonilla card here, it’s also the first time that we have featured the 1988 Score set in this series. This is the first set from Score, which made it a four-card race at the time, joining Topps, Donruss and Fleer. Upper Deck would soon make it a five-card field, though you could say that Sportflics had a small piece of the pie too around this time. I need to feature one of their cards here soon as well. Anyway, today’s Card of the Day is #116 from the first Score set, featuring Bobby Bonilla. 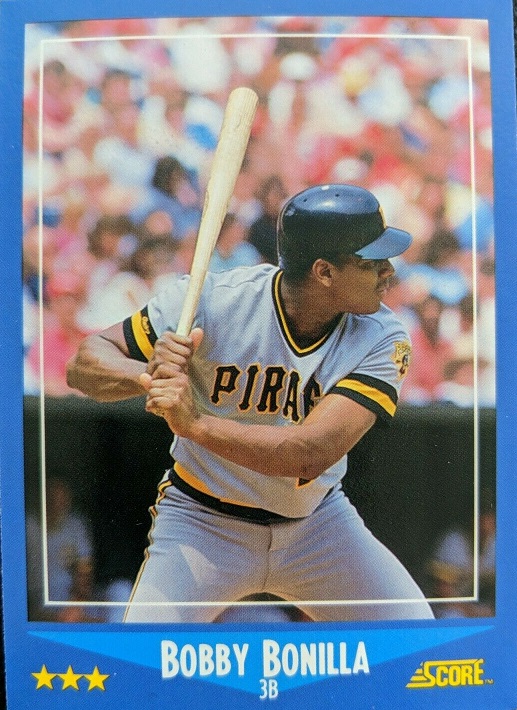 While I wouldn’t say that they are my favorites, the Pirates uniforms of this era are up there on my top ten list. You can barely see it, but the logo on the sleeve is a big favorite of mine…well, at least the design is a favorite. That’s the logo that said “1887-1987” celebrating 100 years of being 105 years old. Even to this day the Pirates won’t embrace the 1882 franchise start date. Luckily you have me to remind you that they are just being ignorant, which doesn’t change the date, it just feeds bad information to fans for absolutely no reason. Wait until I write the article that states that 1891 is actually the correct starting date and it has nothing to do with the “Pirates” nickname change that year. The team you’re watching right now was actually formed before the 1891 season, not 1887 or 1882. The 1882 team is the same as the 1887 team, which officially went out of business on January 15, 1891 (insert head explosion emoji here). Yes, the “since 1887” date annoys me, especially since two other years make more sense.

Back to the card before that rant gets ugly. Bonilla is batting right-handed here, which I only mention because this morning I used a photo of him batting left-handed for the This Date article. I noticed that he wasn’t wearing batting gloves as well. The blue border around the front of the card tells you that this is from the second series of 110 cards. Score had a color coding system for every 110 cards in the set, with six colors being used. All of the cards #111 to #220 feature the blue border on the front. Brian Fisher, Mike Diaz and Bob Walk are the only other Pirates in the blue border section of the set.

Score touted these cards as having “photo quality”, which set them apart from the other sets. That photo quality pedestal them putting themselves upon was usurped the next year when Upper Deck cards blew everyone out of the water. 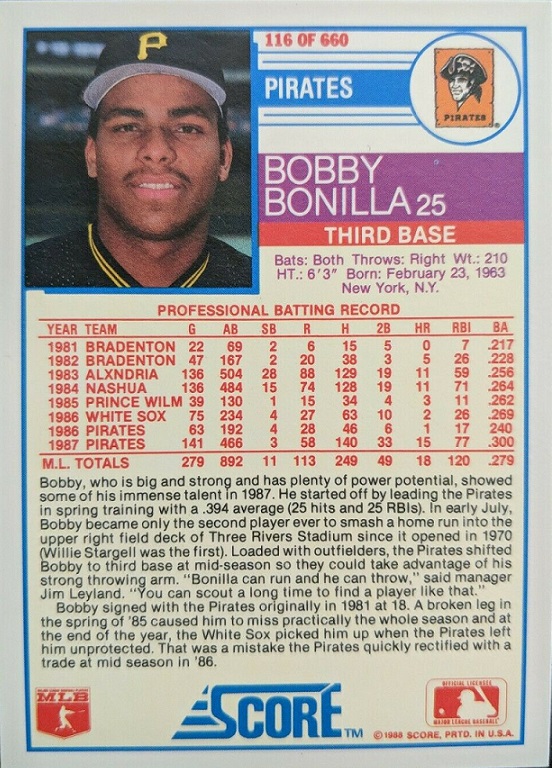 The back of these cards had a ton of information, especially for players with a lot of room in the bio section. Two things really stand out here, at least to me. The first is the stolen base category being placed third in line after games and at-bats? Umm, what? Stolen bases got after RBIs, everyone knows that, especially on cards from this era. It’s strange enough seeing triples randomly left out, but the world is only right when runs follow at-bats.

The other thing that stands out is the end of his bio section. The top gives you a nice little scouting report, along with some career highlights. The second paragraph lets you know how he came to the Pirates, his major injury in 1985 and then the fact that the Pirates lost him in the Rule 5 draft, only to get him back months later. What I thought was rather amusing is how they worded it, with the White Sox picking up up when the Pirates left him unprotected. A little better explanation might have been good for some people back then, like specifically mentioning the Rule 5 draft or saying that he was left off of the 40-man roster.

If you’re interested in this card, you’ll be joyous over the price and availability. While he’s not a common card, these cards don’t run for a lot of money. You should have no trouble getting one off of Ebay delivered to your house for $2. I might suggest the entire Pirates team set though, which will give you a Barry Bonds card too, and that set can be found for under $6. Then again, I have seen the full sets sell for as little as $10 delivered in auctions, so wouldn’t that be even better?