Today’s Card of the Day comes from the 1994 Topps set and features a player who was signed by the Pittsburgh Pirates as an amateur free agent on this date in 1985. The card features Merced in a throwback uniform from 60 years prior to his signing, making it a double excellent choice on a history site today. 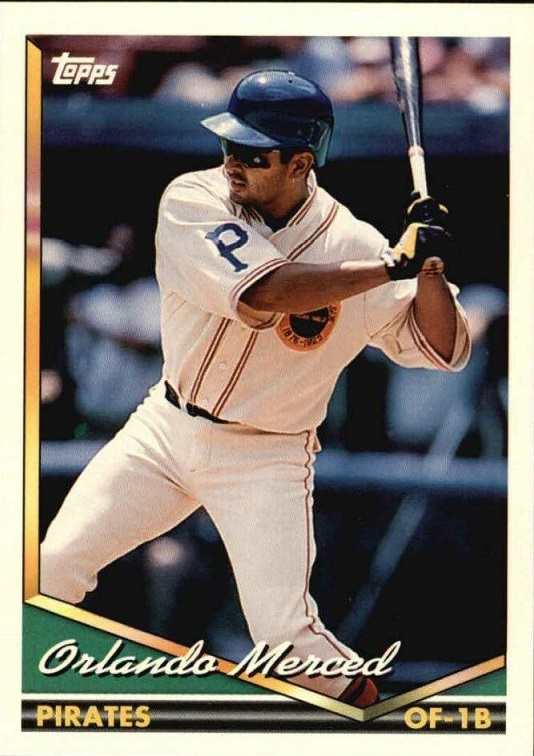 The Pirates won the World Series in 1925, so that’s a good enough reason to wear those throwback uniforms, not that you really need a good reason to wear a throwback jersey. The Pirates have some great ones in their history, so I wouldn’t mind seeing some of the older ones more often. I wouldn’t say that the 1925 jersey is one of the best, but it was unique for one simple reason, and it’s they way you can easily identify the jersey. That patch on the left chest area says 1876-1925, celebrating the 50th season of the National League. All NL teams wore the patch that year. They Pirates were one of three teams that had jerseys with that patch on the front of the jersey. All of the other teams had the patch on the sleeve. In fact, the three teams that did the chest patch (Pirates, New York Giants and Boston Braves) only did it on their home jerseys. Another fun fact not related to this card, the Pirates had an alternate home jersey with the patch on the sleeve, making them the only team to have three jersey options that year. Anyway, this is the chest patch version, with the “P” insignia on the sleeve.

I’m not a huge fan of the 1994 Topps design, but it’s not one of the worst over the years. I like the back of the card much better…

I like the backs with the second photo of players, especially when it’s not just a head shot. This is a great action shot of Merced and they managed to get a different jersey in there. Topps used up a good portion of the back for photos, yet they did it while still featuring all of the same statistical categories they used on earlier cards. The category choices might not seem like the best by today’s standards, but if you collect cards, these 13 categories were the standard for quite some time. As you can see by the back, Merced had his best season up until that point. He set a high with his .313 batting average, which was a 66 point improvement over the previous year. You can also see the career best in slugging, as well as a career high with 77 walks, which tells you that he also put up a strong OBP. The back tells you that he had a great showing as a pinch-hitter in somewhat limited use in the role. Without saying it, you can also tell that he didn’t finish strong, as noted in the batting average 40 points higher at the end of July than where he finished two months later.

Not much to say about the price here. It’s a common card from a common set, so you should have no trouble finding one for $2 total, including delivery. I will note that many people selling this card will have one listing for multiple cards from the set and you have to choose your player from a dropdown menu. That’s becoming all of the rage on Ebay these days. I’ll also note that for about $4-$5 more, you can get the 26-card Pirates team set, which also includes players like Andy Van Slyke, Jay Bell, Al Martin, Don Slaught, Lloyd McClendon, Bob Walk, Kevin Young, Denny Neagle and two draft pick cards.