Today’s Card of the Day is a great card from the 1964 set. It features Pittsburgh Pirates outfielder Ted Savage, who turns 84 years old today. Savage only spent one season in the majors with the Pirates, but he ended up on two Topps cards during that time. For good reason, we chose to highlight his second card with the Pirates. 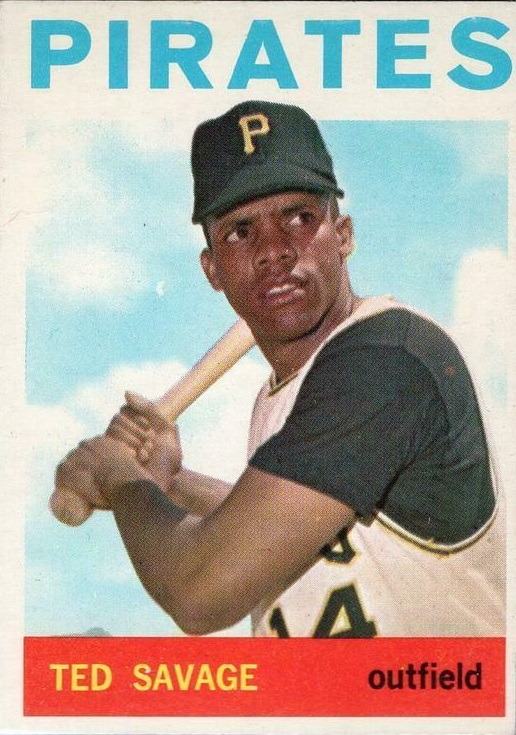 You may have noticed earlier this morning that I used a 1963 Topps card for Savage in the daily history article. I almost used this one for that article until I realized how much better the 1964 Topps card is for him than the 1963 Topps card. The 1963 Topps card uses the old Topps trick of showing a closeup of a player without a hat when that player has switched teams recently. Topps didn’t have a photo of Savage with the Pirates, but the closeup photo hid all signs that he was with the Philadelphia Phillies when the photo was taken. I’m not a fan of those cards, but it’s obviously understandable why they did that back then. They tried to do airbrushing jobs on some cards and many of those came out awful, making the closeup cards look better.

Anyway, the 1964 Topps set came out and it has bright, eye-catching colors on the cards. The Savage card is one of the better ones though because of the background and the sleeveless uniforms from the era. The various teams had different color combos for the team name up top and the name/position box at the bottom. That’s where this card really gets help. The Pirates all had blue at the top, red at the bottom, which makes for a great combo here. Other teams like the Milwaukee Braves had the same color top and bottom and it’s an awful green. It might be great to add a Hank Aaron or Eddie Mathews to your collection, but it doesn’t stand out like this particular card. 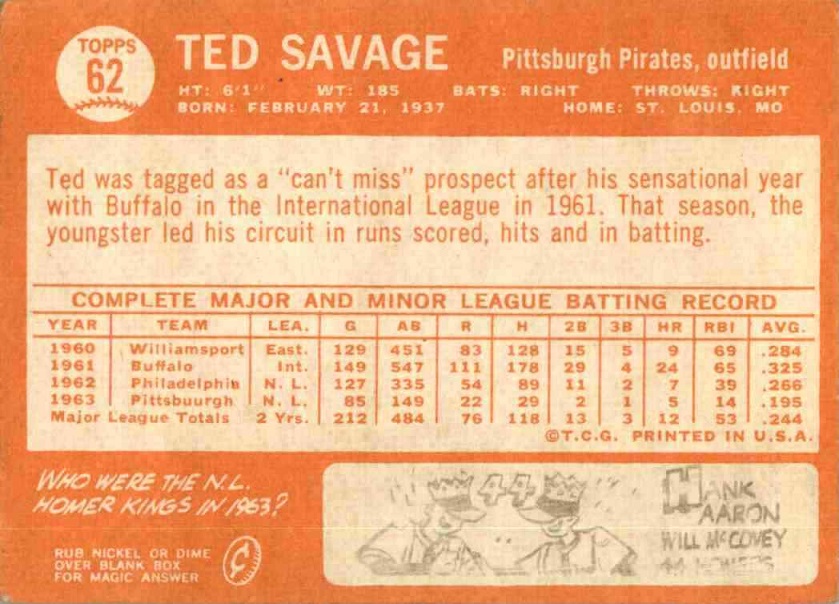 Savage had that “can’t miss” tag that is death to so many prospects, and while he played nine seasons in the majors, he definitely didn’t blossom into a star. His best season came in 1970 at 33 years old for the Milwaukee Brewers, when he got an opportunity to play often for an expansion team in their second year. As you can see in the stats, he didn’t have a strong debut with the Pirates and that ended up being his only season with the club in the majors. He was traded after the 1964 season, which he spent in the minors.

The bottom of these cards had a “blank box” that hid a “magic answer” to a trivia question that almost always had nothing to do with the player featured on the card. Savage had a short career at that point, needing just two seasons in the minors to make it to the big show. That allowed room for both the bio and the trivia question. I don’t think I have to tell you that these cards are better without the bottom area scratched off, but I wanted to show an example with the trivia answer.

I didn’t notice until after this article was posted, but look at the spelling of Pittsburgh on the back of the card in his stats. U can’t miss it.

This card is a common from the 1964 Topps set and can usually be found in decent shape for $3-$4 delivered, costing a little more for a nice mid-grade example. Savage has signed many of these cards over the years and those can be found readily available in the $10-$15 range. Two PSA 8 examples are currently for sale (as of this writing) for $30-$33, while a perfect PSA 10 is up on Ebay right now, one of just two examples to receive that grade according to the seller. That price tag is a mere $1,975, in case you want the best one out there.