Today’s Card of the Day features a Pittsburgh Pirates all-time great celebrating a birthday today, along with an all-time great pitcher, who is enshrined in Cooperstown. The 1960 Topps set, like other Topps sets from that era, featured cards with more than one player on the front and a catchy title. This particular card went with the name “Fork & Knuckler” to highlight two All-Star pitchers who threw unusual pitches. Pirates closer Elroy Face was the master of the forkball, while Baltimore Orioles closer Hoyt Wilhelm worked his magic by throwing a devastating knuckleball. They were featured together on card #115 of the 1960 Topps set, which is today’s Card of the Day on Face’s 93rd birthday. 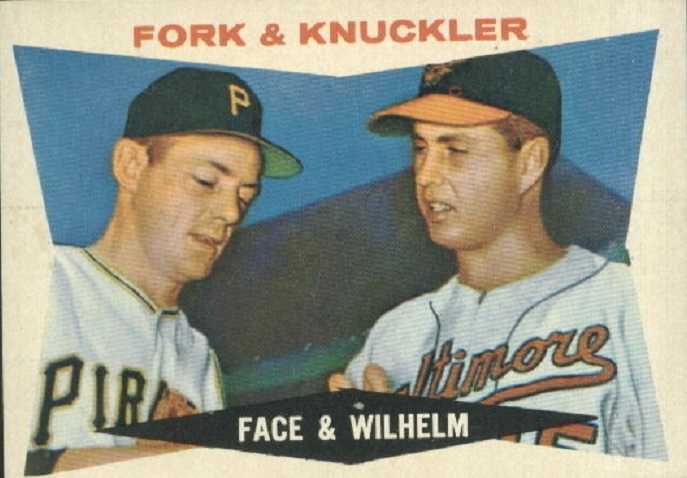 The card has a white border and an odd-shaped frame for the picture, which appears to be the two pitchers showing each other their famous pitches. The odd picture frame and diamond shape box with their last names, blocks what should be the important part of the photo. I’m not saying it’s an odd choice to block out the exact thing featured in the title of the card…oh wait, that’s exactly what I’m saying. Maybe it’s just Wilhelm showing his grip to Face and he’s trying it out, or vice versa. We may never know. If only Topps would reveal more of this same picture two years later… 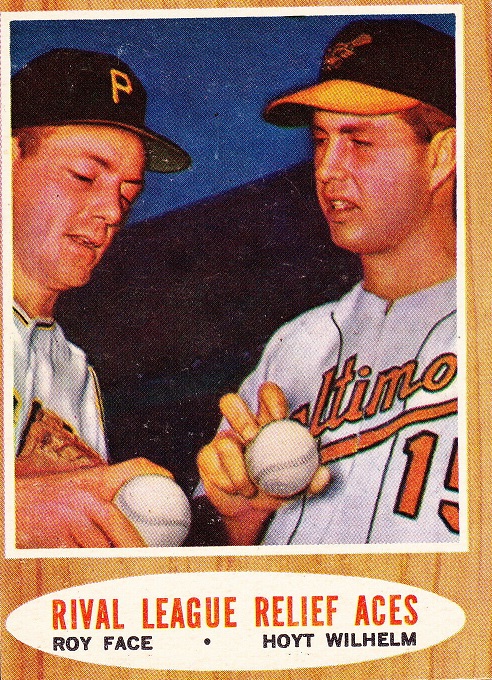 The 1962 Topps set featured the same two players on one card and they used the exact same picture! Who made that executive decision? Anyway, we see that the poorly cropped photo was indeed the two of them showing off their “fork & knuckler” 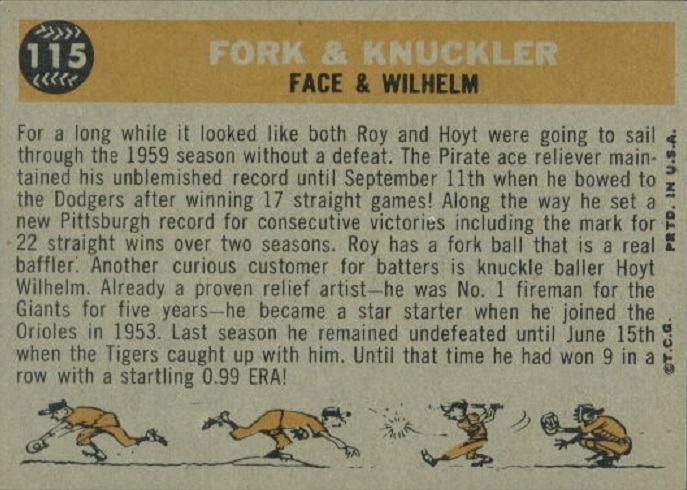 As you can see, the back has a nice bio about the two players and how they both pitched great during the 1959 season. Face finished with an incredible 18-1 record that season. Including his 1958 stats, he won 22 straight decisions. His forkball was a real baffler, as was the knuckleball of Wilhelm, who started the season with nine straight wins and an 0.99 ERA. His record really suffered after that point, even though he led the American League with a 2.19 ERA. Wilhelm’s record was 6-11 from June 15th on, while he had a 2.99 ERA during that stretch. There’s a mistake on the back here. Wilhelm didn’t join the Orioles in 1953, they picked him up off of waivers in August of 1958. Since we will never cover Wilhelm’s 1959 season here any other time I’m sure, I’ll point out that on August 6th he pitched ten shutout innings of relief and got a no-decision when the game ended in a tie after 18 innings.

If you’re interested in getting this card you’ll be happy to know that despite being 61 years old, it is both plentiful and cheap, especially considering that it features a Hall of Famer. I’ll start near the top end for pricing. Numerous examples of this card in PSA 8, which is better than Near Mint, but not quite a perfect looking card, have sold for right around $35. That seems like an incredible deal to me, but it’s the going rate, showing just how easy it is to find this card. This card sells a few times a week on Ebay and if you look around, you can get a decent looking ungraded copy for approximately $5 delivered.  As of the time of this writing, there are two examples that have been signed by both players and they are a bit pricey. Wilhelm did his share of card signing, but he also passed away 18 years ago, so his autograph isn’t plentiful like some Hall of Famers from his era.