Today’s Card of the Day features  a man who the Pittsburgh Pirates acquired nine years ago today and he made quite the impression with his new hometown fans. A.J. Burnett made 87 starts over his three seasons with the Pirates and he retired on top of his game, with a 3.18 ERA over 26 starts in his final season. That happened during his second stint with the club. During his first stint, he was included on some great Topps cards using throwbacks to old front/back designs. For his first appearance in our Card of the Day series, we take a look at one of those throwback cards. He’s featured here on a 2013 Topps Archive card, which used the same design from the 1982 Topps set. 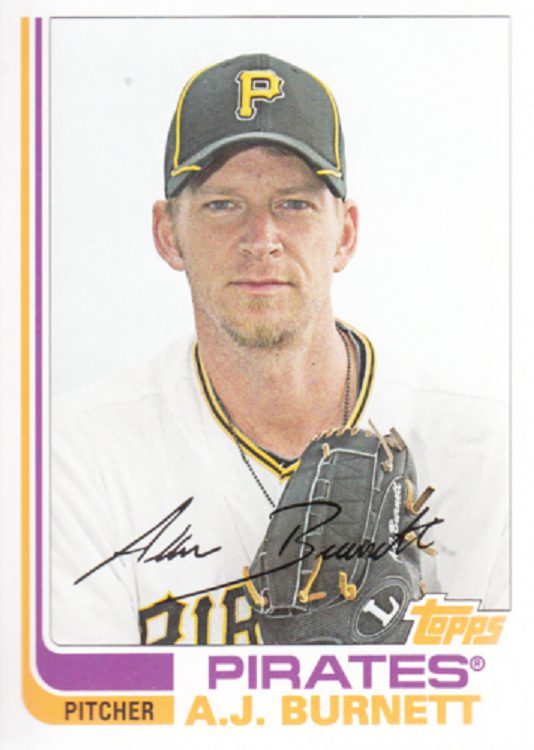 I doubt we will ever know why Topps decided in 1982 to use purple and orange for the colors on front of the Pirates cards in the set. Originally this is one of those old sets that I looked back on and didn’t hate it or love it, but over the years it has shifted closer to the love side of things. It’s a simple design, but it works. Honestly, it might just be the uniforms from the era, but if you can find a cheap set of 1982 Topps Pirates, I’d suggest picking it up.  The only difference between the 2013 design and the 1982 cards is that little registered trademark sign after the Pirates name, otherwise you could only tell the difference by the players involved and the card quality is a little better (you would hope that’s true 31 years later). Just like in 1982, this card includes a facsimile autograph. I wasn’t a big fan of those hats with the yellow stripe like that, but it’s still better than any other team hat out there at the time. 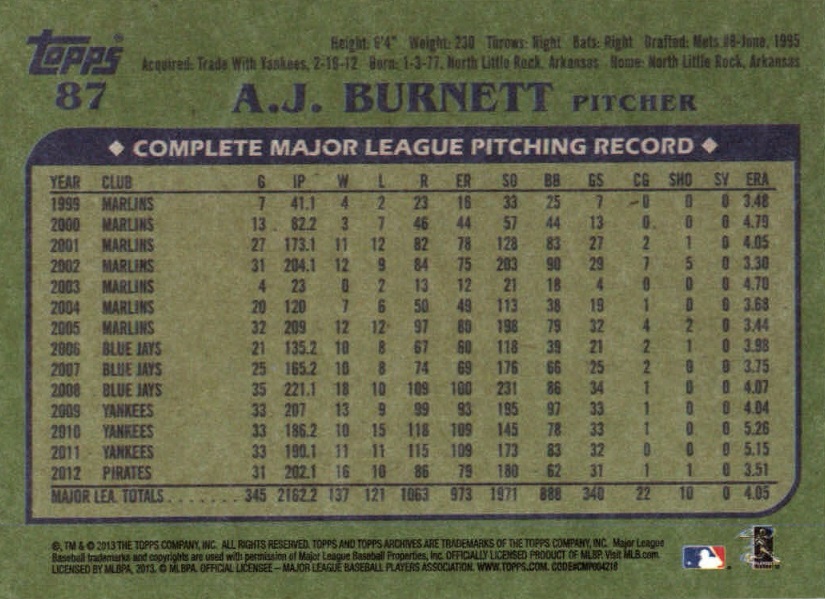 The back is exactly like the 1982 Topps cards except for all of that small print legal stuff on the bottom. This was one of the worst color choices for the backs over the years. The 1982 front design has really grown on me and become one of my favorites (probably is the 6-10 range if I made a top ten). The back however is tough to read, especially if the player has played a long time. The scan here is a bit misleading because it’s bigger and shown to make it easier to read. With 14 years of stats, Burnett has more to read than most people, which makes the print smaller and the dark background/dark writing was specifically designed to hurt your eyes, as part of Topps evil plan to sell baseball card reading glasses (that may or may not be something I made up in my head).

While looking on a website called Ebay for scans and prices to use in this article, I noticed that there were two other versions for sale. You can find the card pictured above readily available for sale in the $3 range, which includes the shipping. There’s also a Gold version, which is numbered to 199, so that’s quite difficult to find. Collectors of numbered cards sometimes put a little added value on card #1, the final card (in this case #199) and the numbered one that matches the player’s number. That last one is not always the case, but it’s something to keep in mind if you have any numbered/limited quantity cards. Anyway, there are two Gold versions for sale currently and both are around $7, which isn’t bad considering the rarity. There is also a day-glo orange one, which was part of a week-long event in hobby stores, where the cards were inserted one per pack and the packs cost just a quarter. So while the day-glo cards were cheap to acquire, they were very limited. Sales of the packs were supposed to be limited to 1-2 per customer, but I’m sure some worked around that. I don’t particularly care for the card, but this article is for the masses. If you want one, the cost/availability will run similar to the Gold version.