Today’s Card of the Day is actually a sticker. In 1967, Topps issued stickers featuring players from the Pittsburgh Pirates and Boston Red Sox. You could buy them by the pack, getting three stickers and a piece of gum for a nickel. The Pirates players were sold in separate packs from the Red Sox players. There were 33 cards for each team. Among the players on the Pittsburgh Pirates at the time is a man who turned 83 years old today and he’s known as one of the best pinch-hitters in baseball history. Card #16 of the 1967 Topps Test Stickers set is our feature card today and it shows Manny Mota, outfielder for the 1963-68 Pirates.

Here’s the front of the “card” (the back is blank): 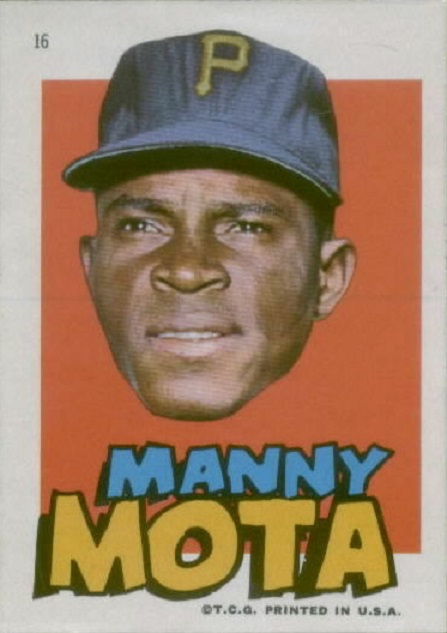 All of the 1967 Topps Test Stickers feature a cropped head shot of the players, a floating head if you will. The names are in shaky block lettering and the background had many options inside of the white border. Some cards were just all white. Others had circles or different size squares. Some were red background like Mota here. Others had blue or green shades coloring in the shapes. The colors for the lettering weren’t standard either and only a few of the Pirates had the blue/orangish colors for their names, like you see here with Mota.

These Test Stickers really don’t have much, especially on the players who have a completely white background. You have a floating head, their name and the set number in the top left corner, along with the ever popular “@T.C.G. PRINTED IN U.S.A.” in the bottom right corner. If you’re wondering what TCG stands for, Topps included chewing gum in packs.

What’s missing from the front here is the team name and position for the players. The position isn’t as important as the team name here, which would have been good to add for certain players. There are coaches and a manager in the set, so they don’t even differentiate there.

Mota has a great black and gold Pirates hat in his photo, as do most players on the team. However, Gene Alley, Jesse Gonder, Steve Blass, Billy O’Dell, Woody Fryman and Roberto Clemente do not have a hat in their photos. Clemente was a household name obviously, even if they called him Bob on the cards back then. Alley was also established as a star by then. The other players were not as well known at the time that these were released, so unless you took it out of the pack yourself, you may not even know that they were baseball players pictured on the stickers. Blass is the worst sticker in this group because he has the solid white background, so his card is extremely plain.

These stickers are far from plentiful. As you can imagine, many didn’t survive in this form for too long. Kids were the main purchasers and they would put these stickers all over the place. That makes them worth much more than three for five cents now. This particular card has three Ebay options as of the time of this writing and all three are priced between $35-$36, so if you wanted one, I would suggest just picking the one in the best condition. However, you could also wait for an auction and get it for about half of the price. They don’t come up often though, so be patient.