Today’s Card of the Day features a Pittsburgh Pirates right-handed pitcher who was born on this date in 1935, and he’s known to this day by a childhood nickname. He should be known more for the disability he overcame to make it to the majors though. Douglas lost his right eye as a child, yet he was able to succeed in the minors and earn a chance with the 1957 Pirates. Today we feature card #306 in the 1958 Topps set, the rookie card of Charles “Whammy” Douglas. 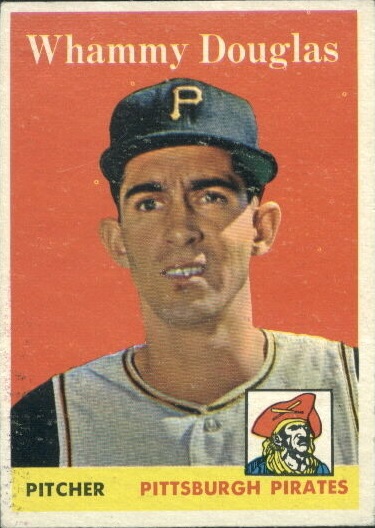 The first thing you notice is the big name up top and the fact that Topps decided to use his nickname on the front of the card. They did that as well for his only other card, which was featured in the 1959 set and shows him with the Cincinnati Reds. Douglas is pictured here in the sleeveless vest uniform, which began during the 1957 season. You would assume that the photo Topps had would be from 1957 based on it being his only big league season, but they could have snapped an earlier Spring Training photo of him, especially after that 1954 season he had in the minors.

The final thing to notice is the great old logo in the bottom right corner. A great idea by Topps that really adds to the 1958 set. They included team logos on the front of 1952-55 cards, but they dropped it for the 1956-57 sets. The team logos would stay on in the 1959-60 sets before getting dropped again until 1965. 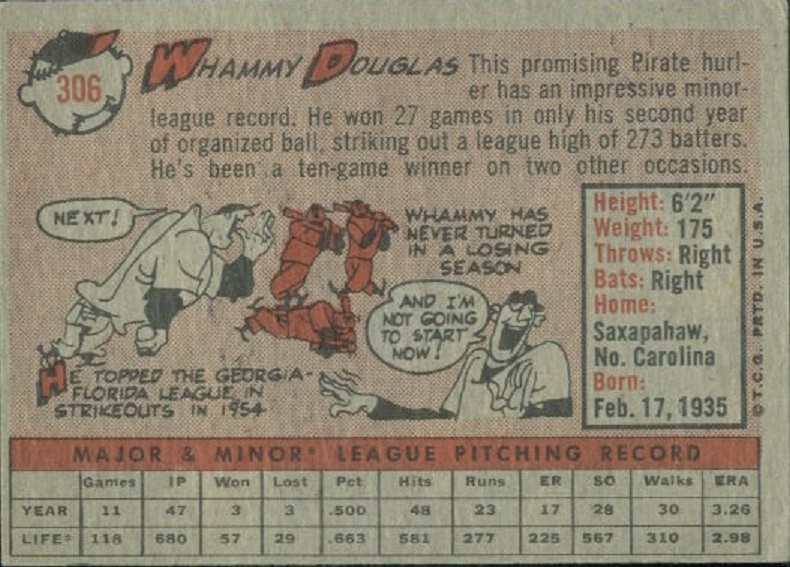 Even the back of the card goes with his nickname, both at the top and in the cartoon. Douglas really made a name for himself at 19 years old in 1954 while pitching in the low level of the minors. He went 27-6, 2.06, with 273 strikeouts in 271 innings. That performance earned him a Spring Training spot with the 1955 Pirates. It was also the topic of the bio section here, as well as half of the cartoon section. The other half of the cartoon notes that “Whammy has never turned in a losing season” and to quote the weird shaped gray guy on the back “and I’m not going to start now!”. The funny thing about that stat is that he had a 6-7 record during the 1955 season. While incorrect, it would prove to be a bit of a jinx as well. He was correct in saying that it wouldn’t start now (it started in 1955), as he went 16-10 in the minors in 1958. It would however start in 1959 after he was traded to the Cincinnati Reds. He had a losing record in each of his final three seasons of pro ball. As a final note on the back, the stats you see there listed under “year” are his stats for the 1957 Pirates and they represent his entire big league career stats.

If you’re interested in this card, you’ll be happy to know that this 63-year-old classic offering from Topps can be bought in decent condition for $5-$10. A near-mint graded example recently sold for just over $40, and if you’re the adventurous type, you can pay just over $200 and get a PSA 9…if you can find one for sale. Douglas also signed more than a few of these, mostly because he lived to be nearly 80 years old and collectors didn’t have many options for his autograph. That being said, they are fairly pricey now, but an auction for one would go for much less. You can probably get an example for $20-$30 with patience, or pay much more without patience. Whatever you decide to do, enjoy the collecting journey!