Grant Jackson, who was a huge part of the 1979 World Series championship team, recently passed away at 78 years old. I didn’t have a good card to pair up with the players born on this date, so I decided to do a little bit of a tribute in today’s Card of the Day article, featuring Jackson’s 1979 Topps card. During that 1979 season, he had an 8-5, 2.96 record, with 14 saves, in 82 innings over 72 appearances. That helped the Pittsburgh Pirates get to the World Series, then he did some of his best work in the postseason. Jackson picked up the win in game one of the NLCS against the Cincinnati Reds by throwing 1.2 scoreless innings. In game two, he picked up a big out in the eighth inning to keep the score tied. In the World Series against the Baltimore Orioles, Jackson made four more scoreless appearances, including the biggest performance of his career in game seven, where he picked up another win by throwing 2.2 shutout frames. He was an important piece during the regular season, who came up big in the postseason. So today’s Card of the Day features Grant Jackson on his 1979 Topps card. 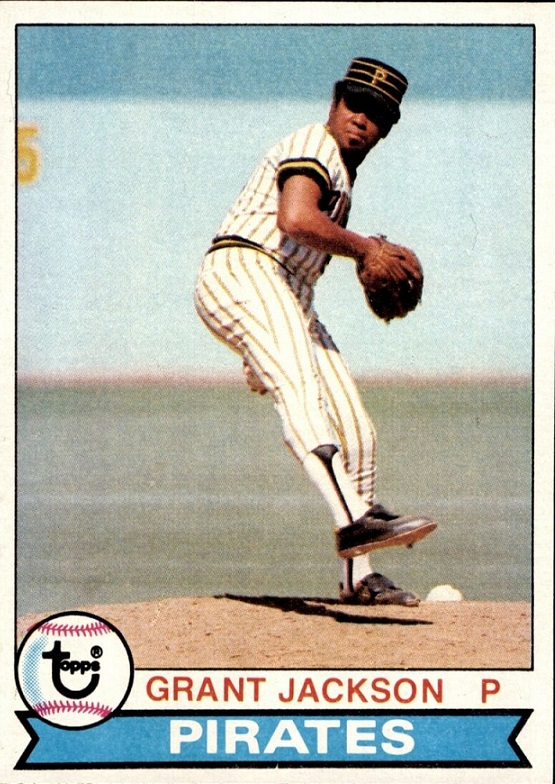 I featured Jackson here once before and I picked his 1978 Topps card because of the warm-up jacket, which was an active part of the Pirates uniform history for a short time. I’ve mentioned this before, but of all of the mix-and-match uniforms of this era, this top was my least favorite, but I’d also say that this combo isn’t the worst. The pinstripes with gold pants take that honor for me. I’ve also mentioned this 100 times before and hopefully 1,000+ times in the future: The black pillbox caps make everything better. Due to the shadows here completely covering his eyes, this isn’t the best shot of Jackson, but I do like action poses much more (I thought of Action Jackson when I said that too).

The 1979 Topps set was a rather simple design, white borders, nothing fancy with the lettering or team name. A big Topps logo baseball in the bottom corner. Not their best offering, but not the worst either. That run from 1977-79 for Topps was a very dull time in their design history. 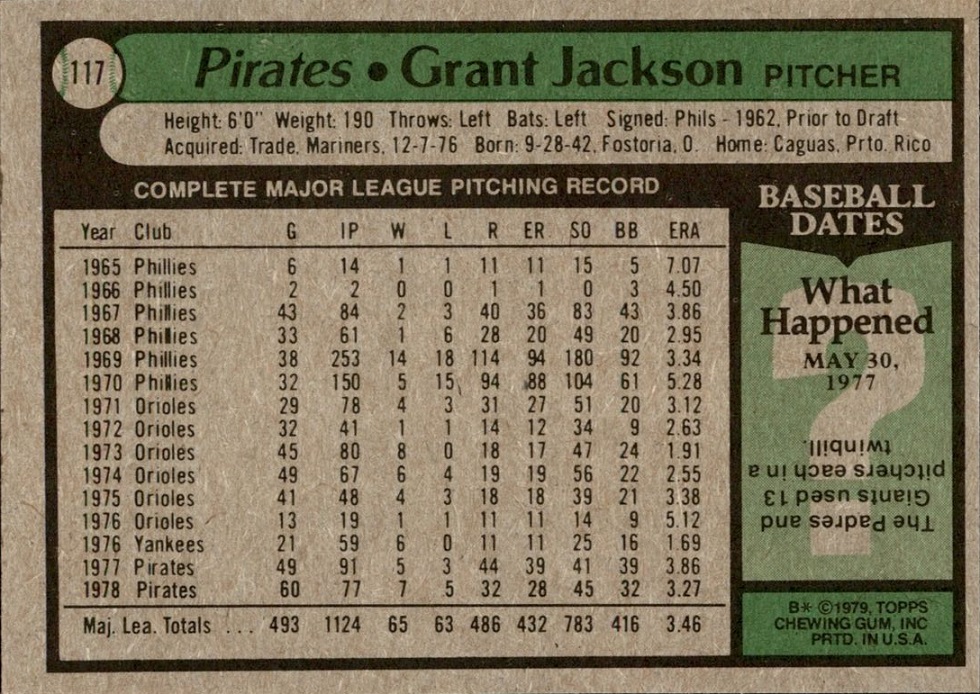 Jackson was already 14 years into his big league career by the time the 1979 season rolled around. I thought about using his 1980 Topps card here today. I like that one better and it would have the 1979 stats on the back, but decided to pair up the card year with the year he is most remembered for during his career.  One thing you might notice here looking through his stats is that he was a member of the 1971 Baltimore Orioles, who played the Pirates in the World Series that year. As you can see, he had a season similar to the 1979 season described above. He also threw shutout ball against the Pirates in a brief appearance during game four of the 1971 World Series, but the Pirates pulled out a victory in that game, so all is forgiven.

If you want to purchase this card, then you’ll be happy to know that it’s easy to find and cheap on Ebay. You’ll pay about $2 and that will also cover the shipping. Jackson was a prolific autographer during his time and there are currently (as of this writing) 11 examples of his 1979 Topps card signed and for sale. Not only did he sign a lot, he also has a great looking autograph. Those sell for around $10, so you might want to add one of those to your collection.