Today’s Card of the Day comes from a 2013 card that uses a design from a set produced 126 years earlier. The 1887 Allen & Ginter set remains popular to this day with vintage card collectors due to the design and great artwork, as well as the player selection and rarity of the set. In 2013, Topps used the Allen & Ginter name and modeled card sets after the great 19th century set, which featured more than just baseball players. Once I decided to use Russell Martin for today’s article, there were two versions of this card I could have selected here. The regular base card was the first, which was short printed, making it tougher to find than your average base card in the set. The other option is the one pictured below, which is the mini version, and even tougher to find. 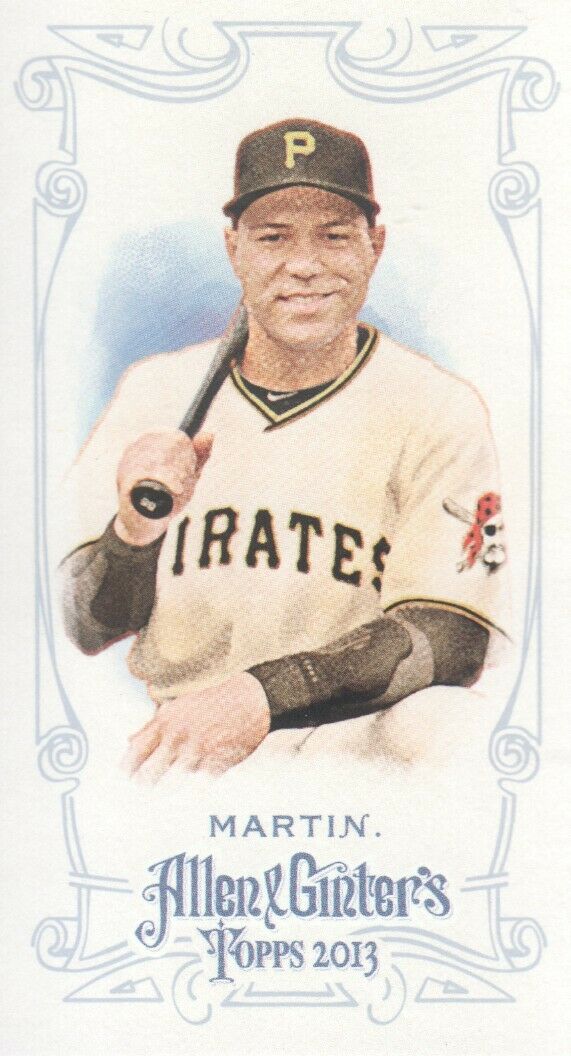 The mini card is smaller than the regular card as you might imagine by the name. It’s also a different shape, with the base card being much closer to a square box shape. It’s just a little taller than wider, which is obviously a bit different than what you see above. The 2013 Allen & Ginter set featured 300 cards that had a regular printing run and then cards #301 to #350 were all short-printed. Martin was included in that latter group, which makes him tougher to find than any card among the first 300 in the set. The mini version was possible to get in one out of every 13 packs (meaning 1-in-50 odds that the one you get is Martin), so you can imagine that it was tough to put together the entire mini set if you just went pack-by-pack to attempt it. Even if you bought 650 packs and the odds worked out perfectly, there’s the great chance to you get doubles in that group.

Martin was with the Pirates for just two years, so there weren’t a lot of choices for him for a Card of the Day article. I almost used a Topps Heritage design with a throwback to an older set (he had two to choose from), until I saw this one. The decision was mostly based on the fact that I’ve used a few Heritage cards already in this feature. I was surprised at how many great looking cards Martin had while on the Pirates, even though he doesn’t have a ton of options. I’ll definitely be featuring him here again in the future because of the card possibilities and because he had such a big impact during his short time in Pittsburgh. 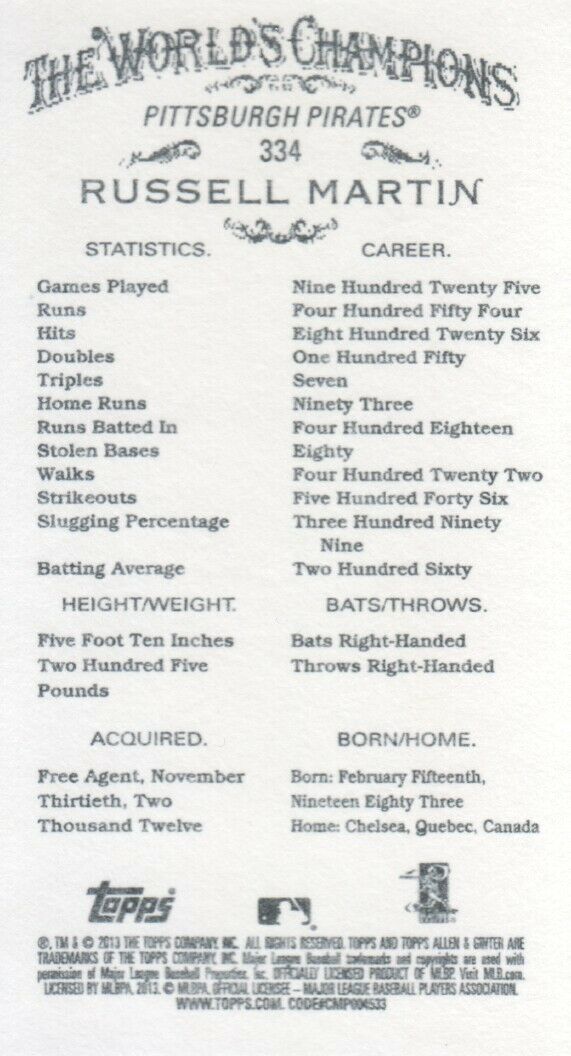 The back is also set up just like the original Allen & Ginter cards, except for all of that legal mumbo jumbo at the bottom of course. I like the hat tip to the old style by writing everything out. As a side note, the old set was also titled “The World’s Champions” on the back, but the section here that tells you his name/team/card number is where Allen & Ginter told you that you could get their cards individually by buying a pack of ten cigarettes, with one card inserted in each pack.

In you’re interested in purchasing this card, then you’ll be happy to know that it’s easy to buy. Get in your vehicle and head on over to the nearest Ebay, where you can find a handful of examples for either the regular issue card or the mini version. The regular card is easier to find and should run you about $2-$3, while the mini doesn’t have many options available, so you might have to dig deeper into that wallet and pay $4-$5.