Today’s Card of the Day is a little more recent than the ones that we usually feature here. After all, this is a history site, and most people remember things from the recent past pretty well, even if most Pittsburgh Pirates memories from that time are best left forgotten. That being said, today is pitcher Damaso Marte’s birthday and he had a very interesting card from the 2006 Topps set. I added a little extra flair to this article by featuring a numbered insert cards instead of a regular issue card. 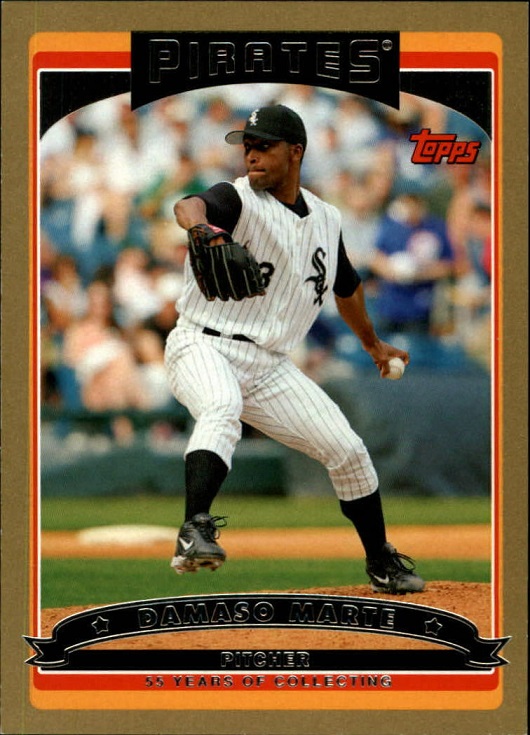 Something is a little off with that Pittsburgh Pirates jersey pictured here, I can’t quite put my finger on it though, maybe it’s a one-year uniform and this is from a throwback day?

If you will remember back to the beginning of this century, Marte pitched for the 2001 Pirates, so I assume Topps had a photo of him in a Pirates uniform at their disposal. Sure it would have been five years old, but that wouldn’t have been the first time that they used an old photo for a player. Marte was traded from the Chicago White Sox to the Pirates on December 13, 2005, which would have been just around the time that production on these cards was wrapping up. It gave them enough time to change the team name at the top, but the photo had to stay. So the result is that Marte is said to be with the Pirates, even though the uniform disagrees.

I mentioned that this is a special insert card. This is the gold version, where the gold color border replaces the white border used for the regular cards in the set. There’s a little bit more on this below in the back section.

Topps was celebrating an anniversary of sorts with this set, saying that it represented 55 years of collecting. Technically it would be 56 years of collecting at this point because there were five smaller baseball sets put out by Topps in 1951 (they also put out a small multi-sport set in 1948, so 57 years might even be better). That might be a 55-year time-span but if you collected all of those years then it’s 56 years. My guess is that they may have just been going off of their first full set in 1952, otherwise the word anniversary would have been used like they have done on other cards. In that way, Topps is a lot like the Pirates because they forget what year their franchise actually started. 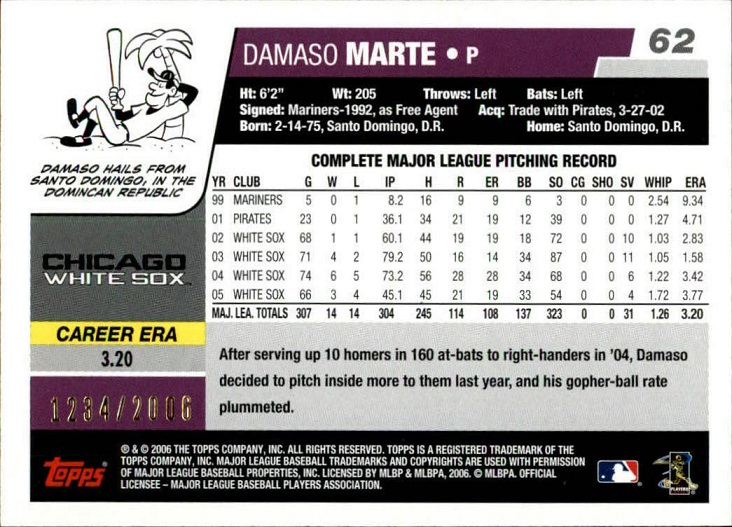 Topps was able to change the front of this card to say Pirates, but they didn’t have the time to change the back design, so he still got the Chicago White Sox layout. The back includes your standard stats, a small bio section, which was there for players who didn’t have too many stats, and a cartoon in the top left corner. Topps constantly used a generic colorless baseball cartoon player who doesn’t resemble any baseball player ever, but he made it on to the back of almost every common and superstar over the years. In this one, he’s either the biggest man ever or that tree is about the size of a baseball bat.

I mentioned that the back also has a gold card indicator and that would be the numbers near the bottom left corner. This particular scan shows that this is gold card #1234 out of 2,006 gold cards inserted into packs for each player. Obviously the number of examples was chosen to match up with the year of the set.

This card is an inexpensive card to pick up. Like most newer cards, you’re paying just as much for the shipping as the card in most cases, but you can usually get it for around $3 delivered. The regular card can be had for $2 each. The regular issue Marte card is easier to find. My search showed  a 5:1 difference in the listings, but the number is actually much higher because people are more likely to list the gold card individually so it appears to be more common than the actual numbers would show.