Today’s Card of the Day features a player for the Pittsburgh Pirates who was born 100 years ago today. Pete Castiglione spent seven seasons playing for the Pirates from 1947 until 1953. Right in the middle of that run, he was featured in the 1950 Bowman set. He had a few options to choose from as far as cards showing him on the Pirates, but we haven’t featured a card yet from the 1950 Bowman set, so that made this one an excellent choice to highlight today.  I present to you card #201 in the set of 252 cards, Pirates infielder Peter Paul Castiglione. 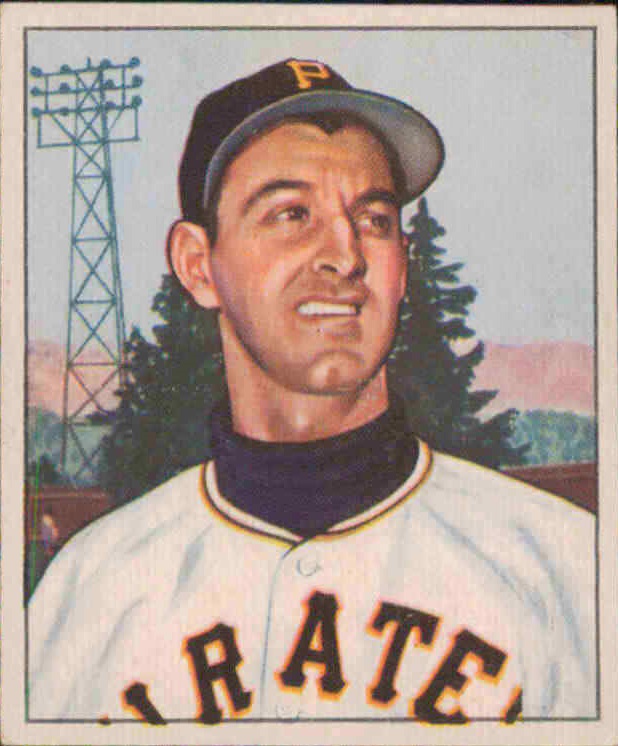 The first thing you should notice here is that this isn’t your regular sized card. It’s not only smaller than today’s current cards, but it’s also more of a square shape, though it’s not a perfect square. These cards measure 2-1/16 by 2-1/2 inches. The second thing about this card which you don’t notice here is the centering. I ran into A LOT of off-center examples before I found a good scan of a decent centered one to use here.

This card is a great artist rendition of a photo of Castiglione, who was 29 years old at the time (probably 28 when the photo was taken). The black and gold combo was a more recent trend for the Pirates around this time, getting away from jerseys that used more red and blue over the years. I’m not 100% sure if they’re trying to recreate Forbes Field in the background, but you might notice that the trees and light tower are on different sides of the fence, and there appears to be someone in the outfield (or outside the fence?) wondering what the heck is going on. 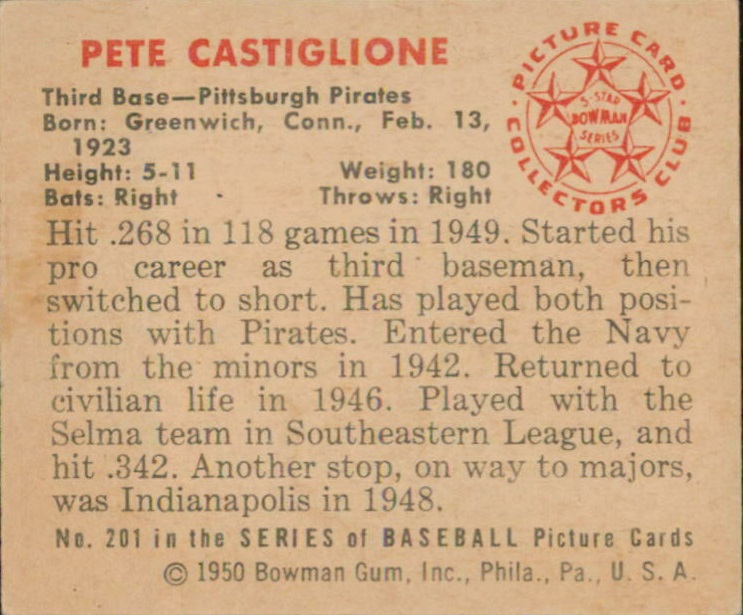 The first thing I notice while looking at this back…no lines of stats. As I mentioned above, these are smaller cards, so they didn’t waste any space on stat lines. They had a bio section that squeezed as much as they could in the smaller space. They gave some info on his 1949 season. They talked about his service during WWII, then they mentioned his minor league stops. Technically that 1948 stop wasn’t on his way to the majors, since he was already there in 1947. Castiglione didn’t see his first regular action in the majors until he was 28 years old.

Speaking of his age, you may have noticed his birthday listed and said out loud “Good job of addition, John. That says that he would be 98 years old today, not 100!”. That would be a correct thought if his age was correct on this card. Castiglione was actually born in 1921, exactly 100 years ago today. I don’t believe that’s a mistake, rather something that was believed at the time. Players lied about their ages a lot back then, either saying they were older so they could sign earlier, or saying that they were younger so it didn’t seem like they had no upside while playing in the minors just because they signed late.

If you’re interested in this card, and who doesn’t want a 71-year-old card of someone who spent seven seasons with the Pirates, then you’ll be happy to know that you have plenty of choices and most won’t break any bank. If you just want a loved copy, say something that would get a grade of VERY GOOD (VG/PSA 3), then you can pick one up for about $6 delivered. A PSA 8 is currently for sale for just under $100, but there’s also another PSA 8 with worse centering that is $20 cheaper. There are also some autographed copies available. My personal recommendation is a nice PSA 5 for about $20. There are three in that price range right now on the site that they call Ebay.