Today’s Card of the Day features Joe Garagiola, who played nine seasons as a catcher in the majors, but he was better known for his post-baseball career in broadcasting. Garagiola was born on this date in 1926 and he joined the Pittsburgh Pirates during the middle of the 1951 season. The timing was perfect for his inclusion in the iconic 1952 Topps set made famous by the Mickey Mantle rookie card that now goes for insane prices, despite the fact that he had an earlier card from Bowman. Here’s a look at card number 226 in the 1952 Topps set, featuring Pirates catcher Joe Garagiola. 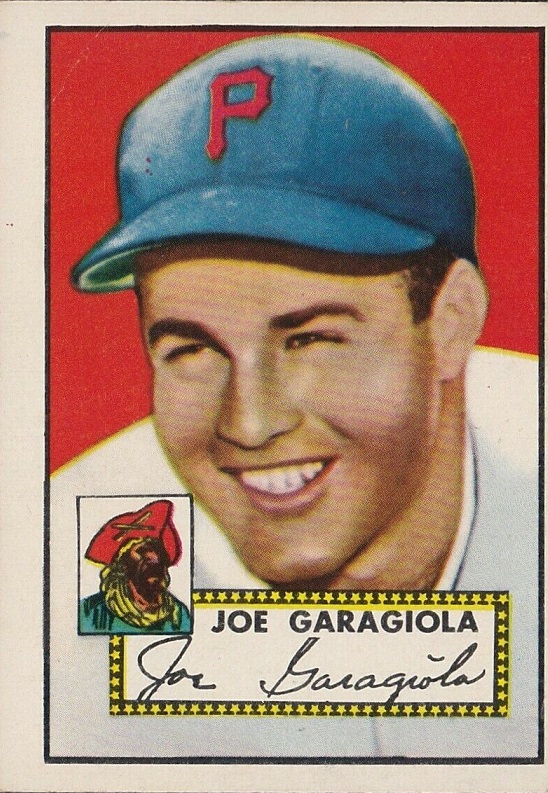 The artwork on 1952 Topps cards featured both one color backgrounds and actual scenes in the background. Many of the Pirates players have trees and/or wooden fencing behind them, but a few of them have one solid color backgrounds, such as what you see here with Garagiola.

The artists for the Pirates cards had some real trouble with the team colors. The Pirates wore black hats with a gold “P” on it by 1951, but most of the cards show blue caps with gold lettering. Garagiola somehow ended up with both colors wrong.

I will mention this for every article where it is relevant. The old school Pirates logos make every card better. One of my favorite parts about this set is seeing all of the old team logos. 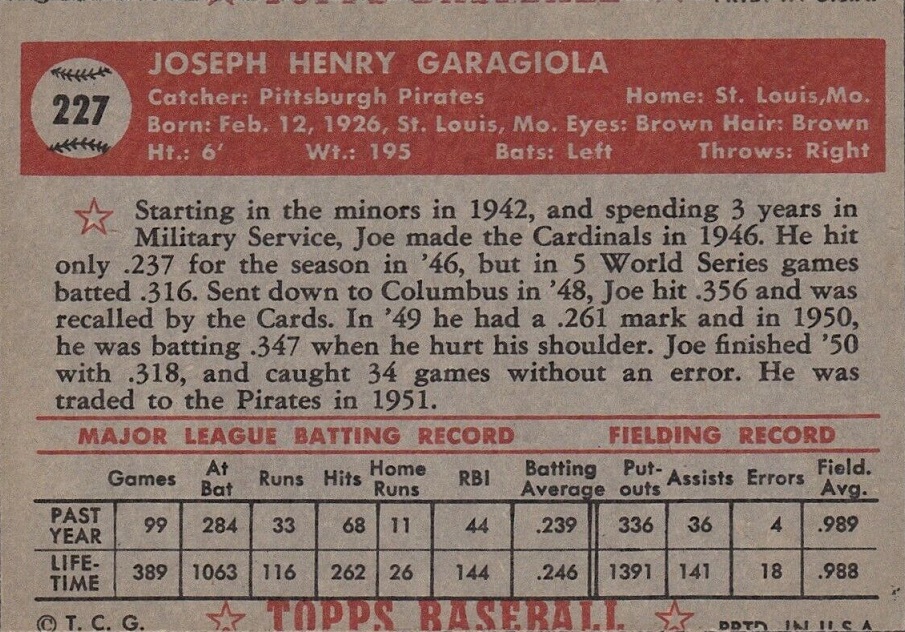 If you noticed on the front of the scan I pulled off of Ebay, the card was off-center. The poor cut also affected the back, as part of “TOPPS BASEBALL” and “PRTD IN U.S.A.” got cut off. You can see remnants of the printing from the neighboring card at the top. Centering affects the prices of old cards, though there is a market for cards that have been miscut so much that parts of other cards show up on the front.

All of the 1952 Topps cards have mini bios for the players, since they limited the stats to the 1951 season and their lifetime marks. They included fielding stats, which was a thing for a short time back in the day. The best hidden gem from this set is the inclusion of hair and eyes colors. That’s not something you see every day on a baseball card.

If you’re interested in this card, just know that it’s not like the $2-$5 low priced cards that I usually feature here. The 1952 Topps set is extremely popular and pricey to put together, which makes it fun for some people to slowly collect, although Mantle prices have recently made it much tougher to complete a set. A the high end for Garagiola, there is a PSA 7.5 that is currently listed for $250. A PSA 6 can be had at the time of this writing for about $100, which seems like a decent price to me, though I’d personally settle for a PSA 5 that is about $25 less (it has a best offer, so you could get it for somewhere under $80). If that’s all too much for you, then consider a decent low grade/ungraded card, which you can get for around $30. Budget collectors can grab one for about $15-$20 for a card that has been well loved. Garagiola lived until 89 years old and he was a willing signer, so you can find some autographed copies to choose from as well.