Today’s Card of the Day features left-handed pitcher Larry McWilliams, who pitched for the 1982-86 Pittsburgh Pirates. This is the first time that he’s featured in this series, so I had plenty of options. I chose this particular card simply because it’s a great pose. I scrolled through Ebay looking at scans and quickly settled on my choice as soon as I saw his 1984 Donruss card. I was originally going to go with a side shot so you could see his funky delivery that helped him strike out 199 batters during the 1983 season, but this card really caught my eye because of the camera angle. I think you’ll agree with my choice. 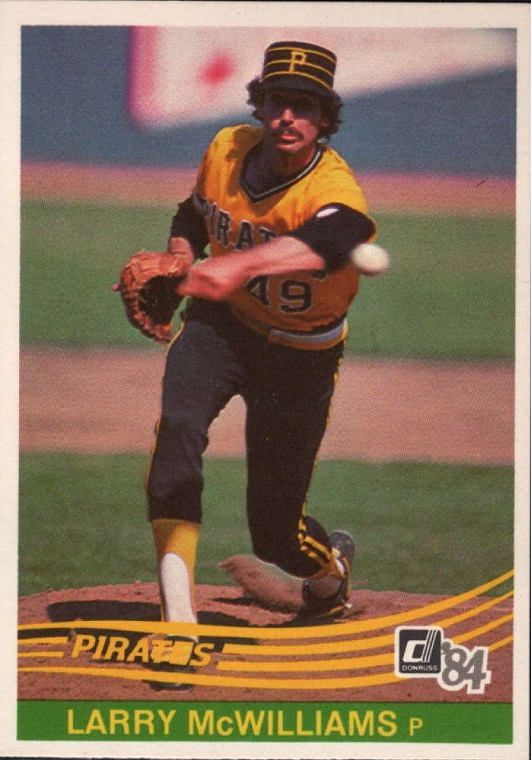 There it is, and it doesn’t hurt that it’s from the 1984 Donruss set, which is considered the toughest full size set from the 1980s, one that picked up a lot of steam for a time because of the Don Mattingly rookie card, which once reached $100 in value because a back injury sidetracked a likely Hall of Fame career.

The camera angle for McWilliams is great, almost like you’re seeing exactly what the batter saw. Not shown here is the funky, strange angle leg kick in his delivery, right before he dropped down and delivered this pitch, with the ball leaving his hands a split second before the photographer got this shot. What I also like about this photo is that it shows (in my opinion) the best pants/jersey combo from the mix-and-match era. The black pants, gold top, capped off with the pillbox hat, really makes for the best uniforms in baseball history. Like I said, just my opinion, but I’m willing to bet that some people agree with me.

I have never been a huge fan of the 1984 Donruss design, but at least it showed some originality after a very plain 1981 design, followed by the 1982 and 1983 sets looking very similar to each other. In another opinion of mine, I think Donruss really had just one design that really hit during their first decade in the game. I’m a huge fan of the 1987 Donruss set. 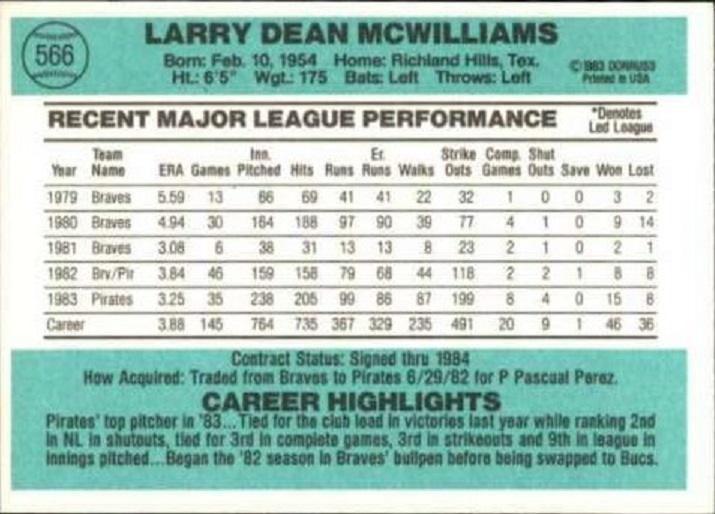 The back of 1984 Donruss cards all have the same set up. It shows up to five seasons of stats for every player, hitting all of the popular stat categories for card backs during that era. I like the contract status section on the backs, not something you find often on cards, and it’s actually tough to find sometimes now for players in the early years of free agency. It also tells you that the Pirates traded Pascual Perez to get McWilliams, in one of those rare trades that works out well for both teams.

His career highlight was being the best pitcher on the 1983 Pirates. A quick check of Baseball-Reference shows that Rick Rhoden put up 4.7 WAR in 1983, John Candelaria had 4.5 WAR, and McWilliams had 3.8, just above Kent Tekulve. I don’t blame Donruss for that claim though, McWilliams clearly had a strong season. In fact, that entire starting staff had a strong year, with Rhoden/Candelaria/McWilliams joined by Lee Tunnell and Jose De Leon, no one had an ERA higher than 3.65 that year.

If you’re interested in this card, you’ll be happy to know that it can be easily found on that Ebay site for $2 delivered, with many options to choose from. Some of those options are hidden by people who list single cards in huge groups, so you see a scan of someone else, then you need to go to a dropdown section to see if certain players are actually still available. You can get good deals that way, but it’s very frustrating at times when it shows up and the player you searched isn’t there.