On August 14, 1909, the Gazette Times in Pittsburgh announced that the Pittsburgh Pirates signed Kemper Shelton the previous day. He was a recent graduate of law from West Virginia University and he signed a two-year deal with the Pirates. They also announced that he would join the Pirates on August 16th. Depending on how much you know about Pirates history, specifically the 1909 World Series champs, you might know that Kemper Shelton never played for the team that year. In fact, he never played for the Pirates. What makes it interesting enough for an article is the fact that he was available to play for the 1909 champs for quite some time, manager Fred Clarke just never put him into a game.

Shelton was described as a fast outfielder by the local West Virginia papers, though they concentrated more on the fact that he played quarterback for West Virginia. What wasn’t known at the time is that he played minor league ball during the summer while he was still in school, though there are no records of him playing. That might be due to him playing under an assumed name, which would have been done to keep him college eligible, while still allowing him to get paid to play baseball. At any rate, he had minimal playing experience ahead of the Pirates, seeing time with Mansfield of the Ohio State League in 1907, Richmond of the Bluegrass League in 1908, then he played independent ball with a team from Huntington, WV prior to signing with Pittsburgh.

During his first day with the Pirates, he worked out in left field and showed off his speed chasing down fly balls. Upon first look, the local papers called him a well built lad, who could also play second base or shortstop. There was also the note that he was signed by Bill Powell, which seems very odd by today’s standards considering that Powell was an active pitcher with the Pirates at the time, though he was from West Virginia, so that may have factored in that decision.

The next day Fred Clarke said that Shelton would remain with the team practicing during the current homestand and get a chance to play “at the first opportunity if he shapes up to major league requirements in practice”. At 21 years old, Shelton was the youngest player on the team, which apparently earned him the nickname “Kid” during his time in Pittsburgh.

Shelton was left behind on August 19th when the Pirates went on a four-city eastern road trip for 14 days. He was working out at Forbes Field with pitchers Sam Frock and Bill Powell. That was a common occurrence back then. Teams would save on travel costs by leaving their deep bench players at home, and if they needed them at any point during the trip, the player would join up with the club on the road. Since the club was away from home, news was scant for Shelton during that time. On August 26th, the trio received permission from manager Fred Clarke to workout daily with a local team called the East Liverpool O&P Potters. On August 30th they played an exhibition game with the Potters after the opposing team failed to show up, with Frock and Powell serving as the two pitchers. The three of them stayed with that club until September 2nd, then they were instructed to meet their Pirates teammates back at Forbes Field on the 4th.

Shelton faded into the background as he rode the bench throughout September. His name didn’t get a mention, but he actually played a game in-season for the Pirates, it just wasn’t a regular season game. On September 19th in Wheeling, WV, the Pirates took on the Wheeling Stogies of the Central League in an exhibition game. Shelton batted second and played right field. He had one hit (a double) and made a sensational catcher off of a ball hit by Bill McKechnie, who at that time was both a former and future member of the Pirates. That catch didn’t get mentioned until the next season when talking about McKechnie looking good against the Pirates in the exhibition game. It was an embarrassing game for the Pirates, who mostly used their bench in a 9-1 loss. 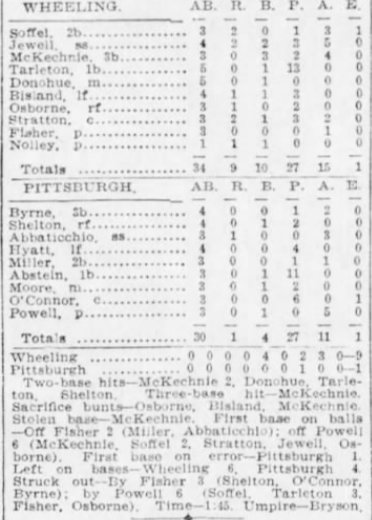 After the exhibition game, Shelton basically disappeared from the print. In fact, the local papers never even brought up his name until October 2nd when they announced the players left behind at Forbes Field when the club went on their final road trip. The group included five pitchers and Shelton, who was now being called an infielder instead of an outfield. The Pirates were carrying 25 players at the time and 19 went on the five-day trip. The next note for Shelton was later in the month when all of the players headed home. The local papers mentioned where each player went for the winter, including Shelton, who was heading home to Morgantown, WV.

The Pirates started reducing their roster in the off-season and after two players were released on November 17th, Shelton was one of 14 infielders on the 39-man roster. Exactly a month later, he was apparently cut from the roster…sort of. The Pirates sold him to Buffalo of the Eastern League. That note was confirmed a few times over the next few days, but on January 19th, it was announced that he was released to Wheeling of the Central League. Making things even more confusing was a story a week later saying that Buffalo was hoping to acquire him, with no mention of the previous deal. As it turned out, he ended up playing briefly for Wheeling, then ended up back in Huntington.

Shelton was back in the minors in 1911, batting .309 in 85 games while playing for three teams in three different low-level leagues. He moved well up the minor league ladder the next year and played three seasons for Columbus of the American Association, where he was a speedy outfielder, who didn’t hit for a high average, but he showed some power, speed and the ability to draw walks. That all led to the 1915 season when he got a ten-game trial with the New York Yankees that couldn’t have turned out much worse than it did. He played those ten games over an eight-day stretch and he went 1-for-40 at the plate. One single, one run scored, two walks, nothing else.  On the bright side, he handled all 22 plays in the outfield.

He is known to baseball today as Skeeter Shelton, a nickname he picked up while playing college ball, though it was never mentioned during his time with the Pirates. It was rarely used outside of the football setting. After his baseball career ended in 1916, he took up coaching in the college ranks, both baseball and football. While he never played for the 1909 Pirates, he was available to play and on the active roster for the final 51 games over a 51-day stretch, which also would have made him eligible for the World Series.

This photo was online and says it is Shelton with an unknown team. I’ll assume the player identification is correct  (and it does look like other pics I’ve seen of him) because that’s a 1909 Pirates uniform shown below: 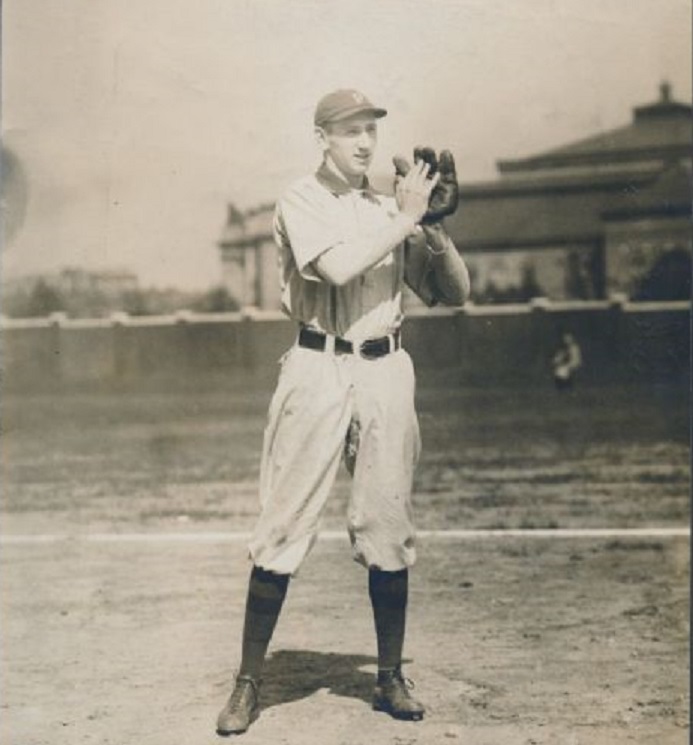