Today’s Card of the Day features a man who was born on this date in 1951, and he passed away way too soon in 1986 before his 35th birthday. Eddie Solomon pitched for the Pittsburgh Pirates from 1980 until 1982. In 1981, Topps lost their stranglehold on the baseball card industry and both Donruss and Fleer joined them as the big three in baseball card production. Today’s Card of the Day is from that first Donruss set, showing Solomon on card #16, about to deliver a pitch to home plate. 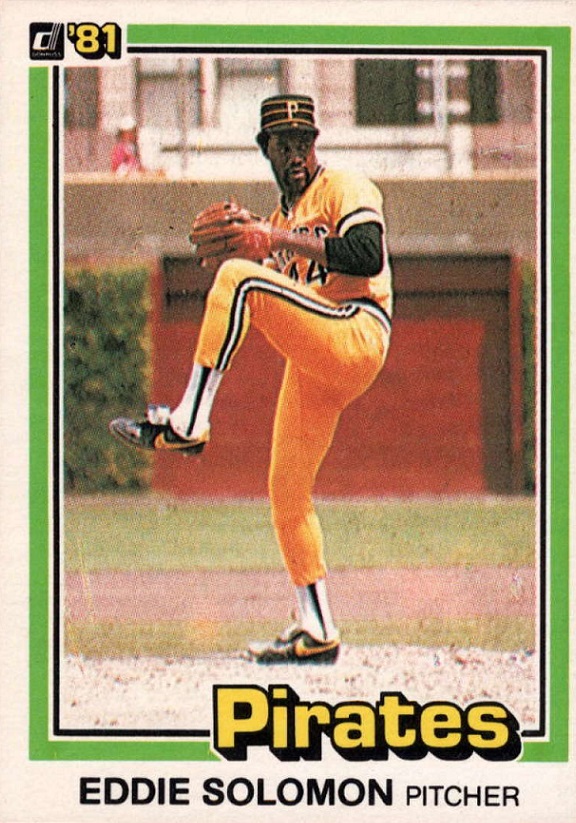 Most people can tell just from that small background available that this photo was taken at Wrigley Field. We also know that the photo was taken during the 1980 season, since that was his first year with the Pirates, and these photos were already taken long before the 1981 season started. Solomon only pitched twice at Wrigley in 1980, once on August 7th as a starting pitcher and then on September 26th as a reliever. Through the magic of the interwebs, I found photos from both days and was able to confirm that this particular Solomon photo was taken on August 7th when he threw a complete game in an 11-3 win. On September 26th, the Pirates were wearing black jerseys.

This uniform is of course from the mix-and-match era, except they matched here, wearing the gold jersey and pants. The black pillbox cap makes any uniform better, and that’s a scientific fact that can’t be argued. What I like most here though is the gold stripes on the cleats. It’s a great image between the uniform, the classic ballpark and the blurry person in the background who probably never knew that they made it on to a baseball card. 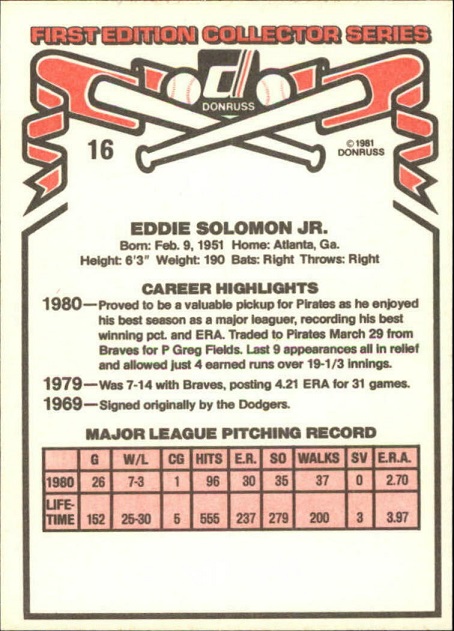 The back of all 1981 Donruss cards include a career highlights section, followed by two lines of stats, which includes 1980 season stats and career numbers. The highlights section tells you that Solomon was signed at 18 years old by the Los Angeles Dodgers, then eventually moved on to his hometown Atlanta Braves, where he had a decent/acceptable ERA and a bad win-loss record. My guess would be that Atlanta was fairly bad that year…(checks Baseball-Reference)…yup, 66-94.

The Pirates acquired Solomon for a minor league pitcher right before the 1980 season started and as the highlights say, “he enjoyed his best season as a major leaguer”. According to WAR, that is not true. He had 2.6 WAR in 1979, 1.4 in 1978, and 0.9 during the 1980 season. I’m guessing that the people at Donruss didn’t get the memo from the future about WAR, so we could let it slide. It certainly looked like a great season, eclipsing his second best single season ERA (at that point) by over a full run. As a side note, his ERA now sits at 2.69 for the 1980 season, so they shortchanged him by 0.01.

If you’re interested in this card then you’ll be over the moon to find out that it’s a common that can be had from multiple dealers on a site called Ebay for approximately $2-$3 delivered. There is even an autographed example available. As mentioned above, Solomon was just 34 years old when he passed away in 1986, meaning he didn’t have long to sign, and his passing was now 35 years ago. That makes him a collectible autograph on any cards. If you are interested in that though, there’s a 1982 Fleer that’s lowered price and has a bolder signature, so that would make a better deal.