I have heard that they are playing a football game today somewhere that a few people are interested in, so I thought I’d tie today’s Card of the Day article into the football theme of the day. The card we check out today features Vic Janowicz, who caught for the 1953-54 Pittsburgh Pirates. He also won the 1950 Heisman Trophy, got elected to the College Football Hall of Fame for his time at Ohio State, and after he was done playing for the Pirates, he played two seasons in the NFL for the Washington Redskins. Today we look at his 1954 Topps card, #16 in the set. 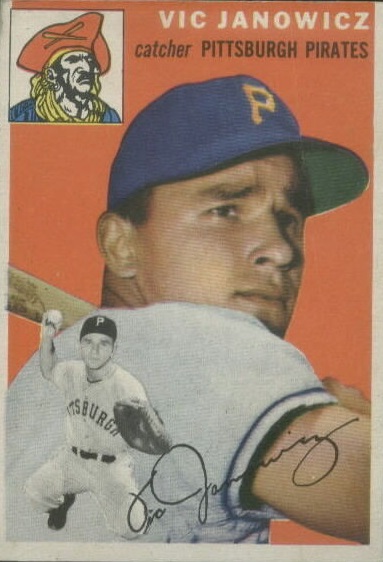 Janowicz had his rookie card included in the 1953 Topps set. Despite not playing during the 1955 season, he had a card in the 1955 Bowman set. Bowman also put out a football set that year and he had a card in that set as well. This card comes from the outstanding 1954 Topps set, which featured two photos of each player on the front. Janowicz is shown in a catching pose, on a small black & white photo. He’s then pictured in a batting pose on the bigger background color photo. It might be a little confusing, but that’s a follow through from a swing. He batted right-handed.

The 1954 set featured a solid one-color background for the two player photos. Janowicz got a nice bright red background. There were also yellow, orange and green backgrounds used in the set. Janowicz is one of just two Pirates to get the red background treatment. The other was manager Fred Haney.

This set included facsimile autographs on front and a nice, big, old school Pirates logo in the top left hand corner. That always adds extra points for me. 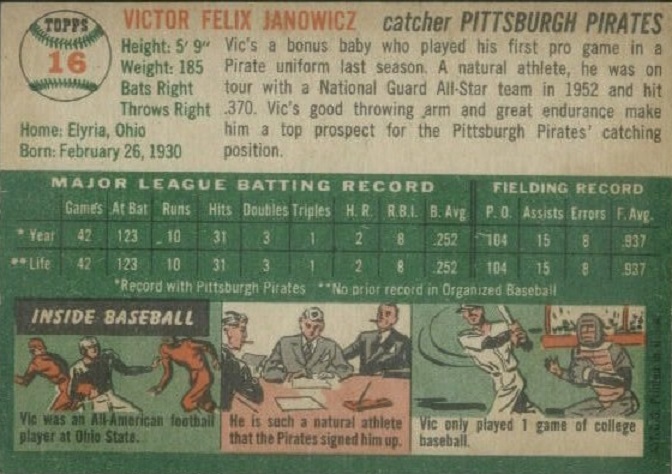 The back of 1954 Topps cards are great. They’re all very colorful, with the two-color backgrounds and the cartoons. The stats only included the 1953 season and then the lifetime stats, so there was room for a bio section and an “inside baseball” cartoon, which broke down his important moments. It’s a bit interesting to note that the cartoon panel for his college football career celebrates the fact that he was an All-American and doesn’t mention the Heisman Trophy he won in 1950. The rest of the cartoon tells you that the Pirates signed him despite the fact that he played just one college game.

The bio section up top mentions that he was a Bonus Baby signing, which came with a guaranteed MLB roster spot. The very quick explanation is that if a player got a large bonus, teams needed to put them right on the MLB roster, either for 1-2 years (the rules changed during the process). It was put in place to keep rich teams from stockpiling the talented amateur players. The Pirates liked Janowicz enough to give him a big bonus and dedicate a roster spot in the majors for him, but he ultimately ended up going back to football.

If you’re interested in adding this card, it’s a common in the 1954 Topps set and it’s readily available. His football cards appear to get more of a boost from the Heisman win than his baseball cards. There are plenty of options here, as 1954 Topps cards are heavily bought/sold on Ebay. There’s a modern Archives tribute card that is very cheap compared to the actual cards, which start out around $4 delivered in very low grade examples ungraded. If you’re looking for something very nice, there’s a PSA 8 for $120, though you can drop down one grade and get the card for half of the price. My personal suggestion would be a nice mid-grade card for about $15.