Today’s Card of the Day features one of the many star players born on this date. Today’s one of the better dates for Pittsburgh Pirates birthdays, with Pedro Alvarez, Richie Zisk, Dale Long, Smoky Burgess and Glenn Wright all born on February 6th. The least known player on that list is Wright, so I decided to feature him here because he should be talked about more. Today’s Card of the Day is one of his earliest cards and it comes from the 1926 W512 set, sometimes referred to as the Famous People set.

A little background on this set first. The year is usually listed as 1926, but some have a 1925-27 range for the set, so it may have been produced over multiple years. There are 50 cards in the set, but just ten of them feature baseball players. The rest are from other sports and actors/actresses from the day. Charlie Chaplin and Babe Ruth are both in the set. Eight of the ten baseball players are in the Hall of Fame. Wright and Everett Scott are the two who aren’t enshrined in Cooperstown. Scott’s name might be familiar to you if you knew who Lou Gehrig surpassed when he set the consecutive games played record. He actually holds the third longest streak still at 1,307 games.

Wright’s no overlooked Hall of Fame candidate, but he was very good before injuries sidetracked his career. As a rookie, he finished 11th in the MVP voting in 1924. The next year, he drove in 121 runs and finished fourth in the MVP voting. He batted over .300 in three of his five seasons in Pittsburgh. He was also an outstanding defensive player, compiling a 4.0 dWAR mark in his rookie season, which is the second best single season mark in team history behind Jack Wilson’s 4.1 mark in 2005. He gets lost a little in Pirates history because the team had Honus Wagner until 1917 at shortstop, Rabbit Maranville from 1921-24 and Arky Vaughan from 1932-41, giving them a Hall of Fame shortstop at some point during five straight decades. Wright’s name may have joined them in Cooperstown if he was only able to stay healthy.

The W512 designation tells you that it was a strip card set. You would received the cards in strips. I’ve seen them in strips of five and sheets of 25 cards, with five rows of five cards. The uncut strips are much harder to find than individual cards. It’s also somewhat difficult to find cards that were hand-cut by people who were familiar with how scissors worked. 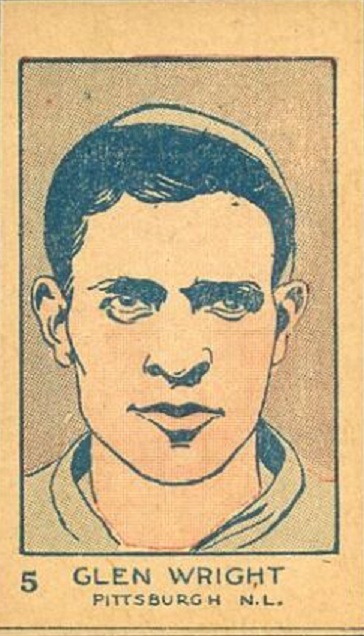 The first thing you probably notice is that his first name is spelled wrong on the card. Okay, I’m guessing that isn’t what you noticed first. These cards are absolutely awful and this is one of the better jobs they did with the artwork, trust me. There are 50 cards in the set and there were plenty of errors, some corrected, some not, with this being one of the ones that they did not correct.

If you could line up scans of about 20 examples of this card, you would notice that the quality control here was as bad as the artwork. There are all different shades on coloring, with some subtle difference and some not so subtle, such as ones that have red on his neck and his shoulder. You can see remnants of it here, but it’s much bigger on some cards, which were likely done early in the printing process. Old cards had some issues with colors not matching up because the machines would run out of ink at different stages, or they wouldn’t do all of the color passes on a card. In more popular sets, that has led to some collectors specializing in color variations. This particular scan shows very little coloring compared to some cards. You can find examples with a purple background.

If you’re interested in this card, there are a few on Ebay and they aren’t cheap. At least not as cheap as you would assume for something that is handcut and looks like it was created in as little time as possible. If you want one, you’ll pay about $30 for the lower grades and then some people ask much more for higher grade cards. You don’t have a lot of options if you want a card of Wright on the Pirates though, so you might have to settle for one here.