A Snapshot in Time: February 4, 1934, The Pittsburgh Pirates All-Time Team

On February 4, 1934, the Pittsburgh Press ended their big build up by announcing the Pittsburgh Pirates All-Time team. The term “All-Time” was a little confusing because their rules for the team was to consider players from the 1900-1933 seasons only. The Press also announced that the voting was done by only four people, Fans were allowed to make their own selections for the team, but their votes didn’t count in the process. Their votes were part of a contest to see who could get closest to naming the All-Time team. The winners got prizes, including two season tickets for the first place winner. That actually ended up getting the Press some angry responses from people who entered the contest and thought some of the picks made by the Press for the team were awful.

The voting was done by the following people only:

William Benswanger, President of the Pirates

At this point you might want to try to make your “All-Time” Pittsburgh Pirates team from 1900 to 1933 to see what you come up with for the team, then compare it to this group. You’ll see my opinions below.

Starting with the most obvious one, which still stands today. The team shortstop was Honus Wagner. There isn’t even good competition for him now if you used all of baseball from 1871-2020 for every team. He’s the all-time shortstop now until someone comes along better.

The second most obvious would have to be Fred Clarke in left field. He was a Hall of Famer on the field and they could have easily made him a Hall of Fame manager as well. He was the team leader while they were winning four pennants in the 1900s decade.

Third most obvious would be the third baseman for this group. Pie Traynor was still a player in 1934, but most of his Hall of Fame resume was written by this point. He had a nice 1934 season, hitting .309 in 119 games, then played 57 games in 1935 and his final five in 1937. Traynor was voted as the All-Time third baseman for MLB’s Centennial team in 1969, so he didn’t really have competition for this spot.

The left-handed pitcher spot was a fairly easy one as well. Wilbur Cooper is the franchise’s all-time wins leader and his time in Pittsburgh was between 1912 and 1924, so he took the spot.

Paul Waner got the nod in right field, despite being still somewhat early in his career. His 1934 season was great and his best season according to WAR was 1936. He was only eight years into his career, but they were eight big years. His worst season up to that point was 4.4 WAR in 1930.

From this point on, fans had their disagreements and the Press posted letters they received in later issues. Some mild reactions, some calling the paper out for being completely wrong. I’ll start with the most mild reactions.

Deacon Phillippe got the right-handed pitcher spot. Babe Adams was a popular choice here as well and it’s easy to see why by modern metrics. Adams put up 52.9 WAR with the Pirates, the most for any pitcher and the sixth most in team history. The five players ahead of him on that list are baseball royalty. Phillippe “only” had 30.5 WAR with the Pirates, but he didn’t join the Pirates until he was 28 years old. From 1901-03 when they were winning three NL titles, Phillippe won 67 games. He wasn’t seeing full-time work by the time 1909 came around, but he still posted a 2.32 ERA in 131.2 innings. Adams had a lot of rough years mixed in to his 18 seasons with the Pirates. Over a shorter time, Phillippe was the better pitcher, while Adams was more of a compiler in the best sense of that term. He had big years followed by down years, but his best years were highly rated in team history. If I’m picking a team to play one game, I’m going Phillippe, but for the all-time team I can definitely see why some favored Adams.

Second base was Claude Ritchey and it’s not a bad pick. He put up 25.2 WAR in seven seasons in Pittsburgh. The current Pirates would take eight fielders with that type of production any day. You would think that I would say Dots Miller needs to be here, but Miller played first base for two seasons, so I’m fine with this choice. George Grantham would have been a good choice as well, but just like Miller, he saw significant time at first base during his seven years in Pittsburgh. Fans weren’t a consensus here, but they gave a lot of their votes to George Cutshaw, who had four solid seasons in Pittsburgh, but isn’t in the same group as the other three mentioned.

The catching spot went to George Gibson, which I agree with as the pick. Some fans liked Walter Schmidt better and he got plenty of support. The WAR numbers show 14.9 for Gibson in 12 seasons (not all full years) and 5.7 for Schmidt in nine seasons. Seems like the Press got it right, but not everyone agreed.

I saved the two biggest for last and I’m not sure of the order. The first baseman was Kitty Bransfield. He was a good player for four years, but we are talking about 4.5 WAR total, and from what I’ve read, that’s a fairly accurate reading of his value. Fans went with Charlie Grimm here and they were pretty outspoken about the choice. Grimm had some good years, but he wasn’t a star by any means. His 1923 season was easily his best, with a .345 average and 99 RBIs. By WAR, he had 3.2 in five seasons in Pittsburgh. The Pirates in the early years had a revolving door at first base until Gus Suhr held down the position for ten years. He actually would have been a better choice here, though he was only four years into his career at this point. Here’s where the “All-Time” part really took away a good choice. Hall of Famer Jake Beckley played for the Pirates/Alleghenys for eight seasons and had 26.9 WAR. He was clearly the best choice, but not an option due to the cutoff.

Center field went to Ginger Beaumont, who was a great hitter for the Pirates over eight seasons, getting on base often ahead of the sluggers, while playing solid defense. He had 22.3 WAR with the Pirates, though his rookie season in 1899 accounted for 3.4 of that number, and shouldn’t be considered here. I don’t think anyone agreed with the choice, but fans were loud in their objections, citing the obvious choice of Max Carey. Even Lloyd Waner got some votes, but this was still relatively early in his career. Carey piled up 52.7 WAR in Pittsburgh before he finished his career with 3 1/2 season in Brooklyn. This is a somewhat similar case to Phillippe/Adams, where peak Beaumont compares well with peak Carey, but the difference between them is much bigger than Phillippe/Adams for career numbers. You’re also talking about a Hall of Famer here versus a guy who has never received Cooperstown support.

How did you do in your choices? 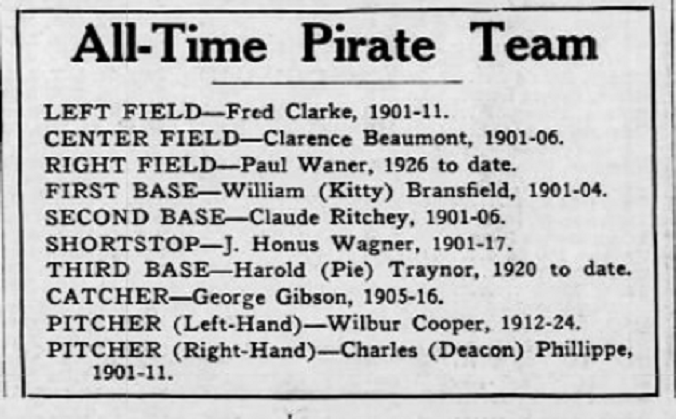 The rules of the voting clearly stated 1900 as the first year multiple times, so I’m not sure why 1901 is used as the date here in the photo. It would only apply to Bransfield. The others were all there in 1900.

John Dreker
The Pittsburgh Pirates announced that infielder Rennie Stennett has passed away at 72 years old. He was with the Pirates…

John Dreker
On March 4, 1899, the Pittsburgh Press printed a list of 23 players provided by manager Bill Watkins. It was…

What if? John Wooden, Pirates Manager