Right before the start of the 1885 American Association season, the Pittsburgh Alleghenys took on the Buffalo Bisons of the National League. It was a major mismatch on paper, pitting the great James “Pud” Galvin versus the team that he would join later that same season. The Bisons had Hall of Fame first baseman Dan Brouthers batting in the cleanup spot, while the Alleghenys had a pitcher batting third and playing left field. It turned out to be a great game, but the reason it’s the focus of today’s Game Rewind feature is the man who was standing at first base for the Alleghenys that day.

Before he even played his first game of pro ball, 21-year-old John Tener got a one-game trial two days before Opening Day. He was a local amateur, living in Pittsburgh at the time. He would go on to play four seasons in the majors, the last three as a pitcher. Tener would also go on to become the Governor of Pennsylvania from 1911 until 1915 and President of the National League from 1913 until 1918, serving for a time in both roles.

The full play-by-play isn’t available for this game, but I did my best to piece an article together from the various game recaps and the boxscore, which can be found below.

This contest was played at Recreation Park in Allegheny City, which is now part of Pittsburgh. It was a Thursday afternoon and approximately 2,600 fans showed up for the final preseason game before the Alleghenys headed off to St Louis for their season opener on Saturday, April 18th.  The field had a good soaking from rain, so the grounds were soft and it affected the play. These same two clubs played an exhibition game two days earlier and the Alleghenys won 4-2, with Ed Morris striking out 11 batters. Buffalo had a young pitcher John Connor doing their work. He would pitch just one regular season game for the Bisons, and he finished his big league career with a 2-8 record.

Galvin was already well on his way to his spot in the Hall of Fame by the time this game occurred. He had 209 wins at the time, coming off of back-to-back 46-win seasons. He was also a good drawing card in Pittsburgh, as local fans remembered him from his days playing minor league ball in town years earlier. The Alleghenys had Frank Mountain in the pitcher’s box (there were no mounds back then, just a box outlined on the ground that the pitchers had to stand in when they delivered the ball). Mountain was no slouch, though his career was much closer to the end than Galvin’s was at the time. Mountain won 26 games in 1883 while playing for Columbus of the American Association, though he also led the league with 33 losses.  He was much better in 1884, going 23-17, 2.45 in 360.2 innings. However, he picked up just one win with Pittsburgh over his final two seasons of Major League ball.

I mentioned that left fielder for Pittsburgh was a pitcher, and while that’s true, it would be wrong to leave it at that fact. It was actually Hank O’Day, who had a decent career in the pitcher’s box, then had a Hall of Fame career as an umpire, where he’s rated as one of the best ever. Buffalo had Lewis “Buttercup” Dickerson in left field. He played for the Alleghenys in 1883 and lasted just five games with Buffalo. At shortstop that day was John Hayes, a California lad who was getting a tryout with the Bisons. He lasted all of Spring Training before getting cut on the final day, then never played in the majors. Everyone else in the lineups shown below had their day in the sun in the majors. The umpire was Morrie Critchley, who pitched one game for the Alleghenys in 1882 and threw a shutout, which ended up being his only big league win.

Neither team had much offense going in this game at any point. In fact, the first run of the game came on an error from Tener, who was trying to prevent a run from scoring in the fourth. His throw was wild to catcher Rudy Kemmler, which allowed Bill Crowley to cross the plate and make it 1-0. Crowley was one of two players in this game to get on base more than once. He had a single and a double. Hardy Richardson also had two singles. Henderson was a .299 hitter in 14 seasons, who won two home run titles and posted a 40.9 WAR during his career, which obviously wasn’t a known stat at the time.

That one run in the fourth inning held up and the Bisons won 1-0. Galvin pitched a brilliant game, allowing three singles and a double. He got great support in the field, with no errors behind him. That was partially helped by the fact that he struck out ten batters. Mountain was almost as good. The run was unearned, while he allowed just four singles and a double. He got some decent support behind him in the field. Committing two errors back when official scorers were as brutal as the equipment the players used, including gloves, if any of them even used one at the time. It’s possible that only the catchers wore gloves in this game and those were fingerless gloves that offered a little padding for the palm of their hands.

Neither pitcher walked any batters in this game, so combined with the fact that both pitchers limited base runners, this game was played in 90 minutes. Tener and second baseman Pop Smith got some praise for an impressive double play that they turned. Pittsburgh center fielder Fred Mann brought about a loud applause for his catch of a fly ball in the eighth inning. According to the Pittsburgh Post-Gazette, the best play was made by an unlikely source. Hank O’Day made a catch out in left field in which he ran a considerable distance to get to the ball. The ball was hit by Richardson, who got robbed of a possible three-hit day.

On the flip side, the worst defensive play of the game also had some humor involved. Pud Galvin grounded out to shortstop John Richmond. Galvin, who wasn’t a fast runner to begin with, slipped going down the line due to the wet conditions. Richmond had all day to make the throw, but he threw it away and Galvin reached first. The error didn’t hurt the Alleghenys, other than possibly Richmond’s pride.

Tener went 1-for-3 at the plate with a single. He had 11 plays in the field and handled ten cleanly, though obviously the error was what stuck out the most at the end of the day. In the local papers the following day, Pittsburgh manager Horace Phillips said that he was satisfied with the play of Tener and that his error was excusable. Despite being satisfied, Tener did not get another chance with the team. He played one game for Baltimore of the American Association later in the year and it was just one game for good reason. He went 0-for-4 at the plate and committed three errors on three chances in right field. Three years later he played his second big league game and he was a pitcher by then.

Here’s the boxscore from the April 17, 1885 edition of the Pittsburgh Post-Gazette. The statistical categories are runs, hits, put outs, assists and errors. 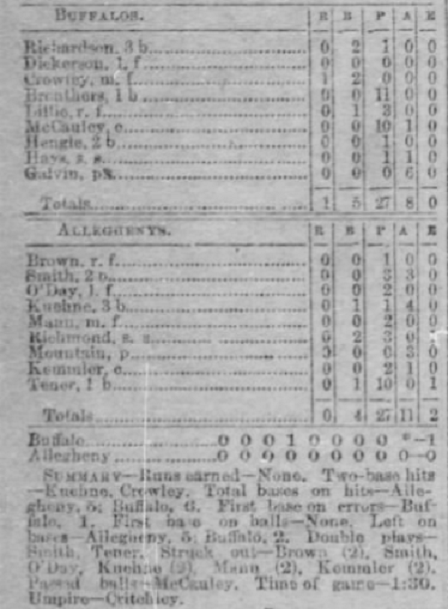