I’ve been on a recent kick trying to get to cards here for players who should have been covered already in our Card of the Day feature. We are well over 100 articles deep in this series, so we shouldn’t be missing any big names by this point, but I’ve definitely overlooked more than a few. One of those players is Gene Alley, so we rectify that oversight this morning. Today’s Card of the Day features Alley and Orlando McFarlane on a 1964 Topps card that highlights two rookie stars for the Pittsburgh Pirates. 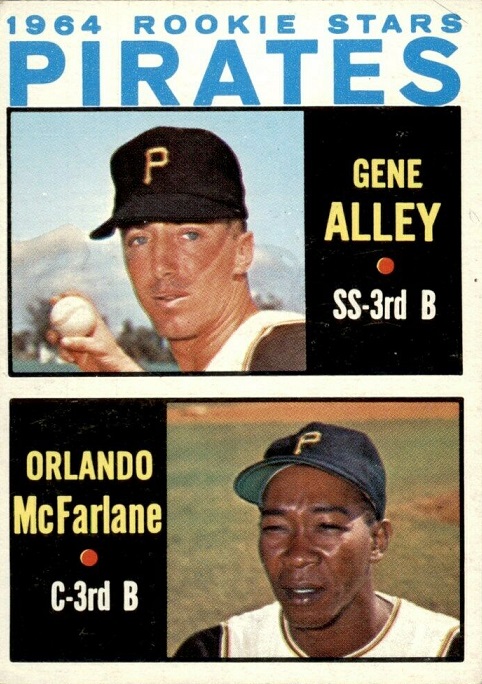 It’s interesting to note that both of these players have third base listed as their secondary position. McFarlane never played third base in the majors, but he saw plenty of time there in Triple-A in 1963, so it made sense to have it listed for him. Alley actually saw more big league time at the hot corner in his brief 1963 time than he did at shortstop, but over the next ten years he played the position just 24 more times, spread out over six different seasons.

I’m a big fan of the look of these cards, with the Pirates colors making up the box/letters for each player. Don’t ask me why the print up top is in blue though. They had random colors for that throughout the set, green, orange, purple, etc and they really didn’t try to match them up to the team colors. There is also another Pirates Rookie Stars card in this set that I will get to some time in the next five years, featuring pitchers Tom Butters and Bob Priddy. 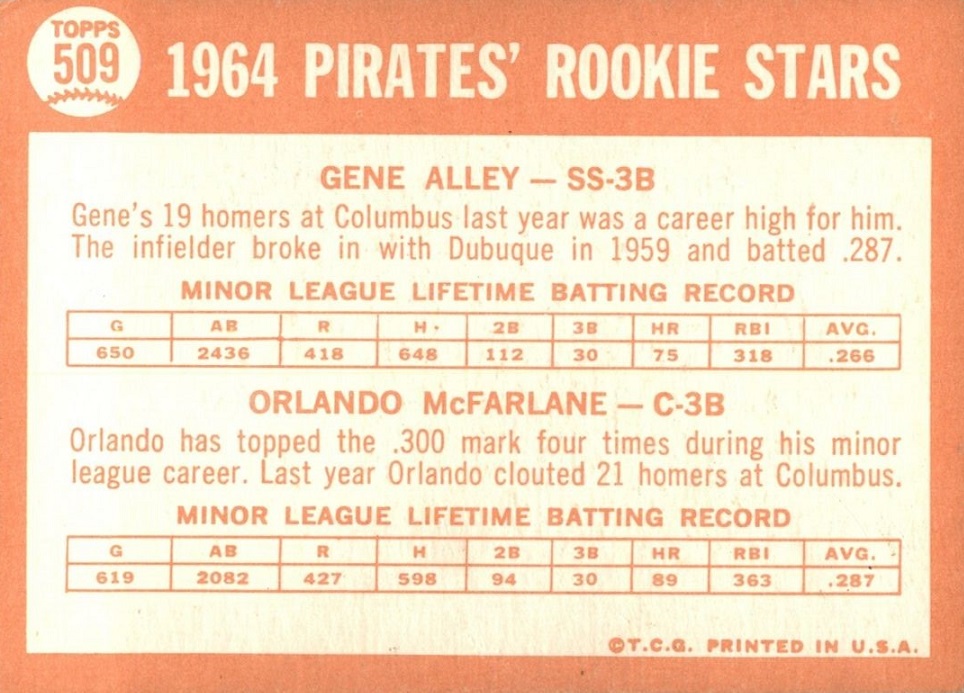 The back only includes minor league stats for the two players. McFarlane debuted in the majors at age 23 in 1962, playing eight early season games before being sent to the minors for the rest of the year. He remained in Triple-A for all of 1963, then began the 1964 season with the Pirates. Alley made his big league debut on September 4, 1963 and saw regular playing time over the rest of the month, then remained in the majors for the next ten seasons.

This was obviously a good choice here with picking Alley for a Rookie Stars card. He put in 11 big league seasons, making two All-Star games and winning two Gold Gloves. He compiled 24.2 WAR in his career, which ranks him 25th in team history. He dWAR is even more impressive, ranking fourth all-time in team history. While McFarlane didn’t have a memorable career, his minor league stats offer a strong resume for his inclusion on this card. The back notes that he had four seasons batting .300+ and he had 89 career homers. He ended up playing a total of five seasons in the majors, hitting .240 with five homers in 124 games. He ended up with 129 minor league homers and 120 stolen bases, to go along with a .285 career average. The pick didn’t work out for future value here, but you can definitely see why they those to feature him.

If you’re interested in this card, then head on over to Ebay and see if you can pick up one for under $10. At the time that I wrote up this article, there weren’t any active auctions for under $15, but a search of completed items shows that a little patience should save you some money. There aren’t a lot of active auctions for this card. That partially because it’s from the high number series, which are tougher to find. That drives the value just as much as Alley being a multi-time All-Star/Gold Glove winner.