I have often mentioned that the Pittsburgh Pirates were never officially the Pittsburgh Pirates in 1891, and that’s not just because of the fact that Pittsburgh was spelled without the “H” at the end from 1890-1911. I usually leave that part out to avoid more confusion. Being able to do more extensive research now, I found out that the old stories weren’t true about the team name. The first is the word “official” being used for the team name in 1891, which you can see in print numerous times. I may have even written it that way in the early years when old newspaper articles were tougher to get a hold of to double checks “facts”.

We have all heard the nickname origin. The Alleghenys signed a bunch of players (Louis Bierbauer mostly gets the credit) away from teams before the 1891 season and they were called Piratical for their actions. The Pirates name stuck from that point on. That is not true. The Pirates nickname was used by outside newspapers mostly until 1895, then it took over for all of the local papers during the end of Spring Training in 1895. The team itself went by the name Braves in part of 1893 and all of 1894. The team was called Alleghenys off and on after 1890, as well as Allies, which was just a smaller print form of Alleghenys. They were also just called “the Pittsburghs” often. When Ned Hanlon was the manager during that time, the team was called the Hanlons. That wasn’t an uncommon practice. The Brooklyn Dodgers were the Brooklyn Robins for a long time because of manager Wilbert Robinson. During the second half of the 1891 season, the team was called the Pets. That’s because manager Bill McGunnigle ran practices with a whistle, so they were called McGunnigle’s Pets, which was shortened to Pets.

I thought I had a pretty good grasp on the name changes over the years until recently writing an article about an 1898 player. I have seen the name Patriots used for the team that year, but it wasn’t odd to see the writers use a different name in an article once in a while, especially outside of Pittsburgh. I never knew until I dug deeper that day how much Patriots was used. It wasn’t just an occasional reference, it was actually the team name that year, and no it was not official, but the club embraced it fully, as did the writers, both local and on the road. There’s no doubt about it, the 1898 Pittsburgh team was known as the Pittsburg(h) Patriots, and there was a good reason for the nickname.

The April 10th Pittsburgh Press first explained the reason for the new nickname, which immediately caught on:

There was soon a better description of those uniforms. The April 18th Courier Journal covering a game in Louisville noted that the Pittsburgh uniforms had “navy blue trousers and caps, white shirts and red and black stockings. It is a sort of American flag uniform”.

In their first trip to the east wearing the new uniforms, this report came out, which was very similar to the report months earlier: 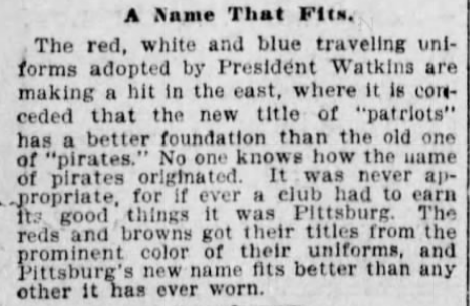 I could include hundreds of scans for the Patriots usage, but you’ll have to trust me on this one. The team name Patriots was used about 10:1 compared to Pirates references by the middle of the season, based on search results on Newspaper.com.  Many writers in other cities didn’t use it until they actually saw the team in person, then it was used more often once all 11 opposing teams saw the Patriots that year. The interesting part is that it really caught on with almost every newspaper, even the outside ones that originally took pride in dubbing the team “the Pirates” due to their actions in early 1891. The Baltimore Sun ran an early article noting that manager Bill Watkins was the reason for the new name, as he didn’t appreciate his team being likened to pirates.

The best example of the Patriot usage being accepted that year would come out of Philadelphia, the city that ran hard with the Pirates name years before it was accepted in Pittsburgh. This is a headline from the August 6th Philadelphia Inquirer: 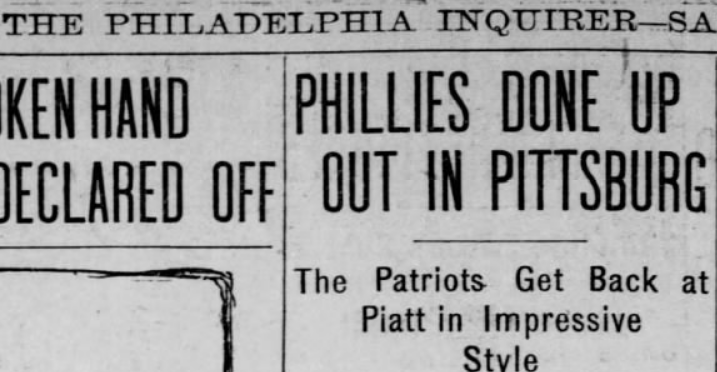 The new name seemed to go away with the end of the season, last getting mentioned by the local papers on October 11th. The Pirates name came back in 1899 when the uniform changed to all white, with a blue cap and blue stockings, because nothing makes you think of Pirates like an all white uniform. One outside newspaper even noted in April of 1899  that Ginger Beaumont with his red hair was the only patriotic player on the team now.

So there you have it, the Pittsburg(h) Patriots were a thing in 1898 for the entire season, with new uniforms and everything. Just like the team itself used the Braves name during the 1894 season, Patriots was the official unofficial nickname of the 1898 club.