If you saw today’s This Date in Pittsburgh Pirates History article, then you read about the best nickname in baseball history. That’s obviously just my opinion, but I probably put much more thought into than any normal baseball fan should. I thought it was best today to pair up the Card of the Day article with the history article and go for another nickname, which put me on a search for a sufficient match. I went to my trusty companion (an up-and-coming website called Ebay) and found a great card for this idea. It’s a 2017 Donruss card featuring the great Willie Stargell and the front says nothing more than “Pops” for the name. 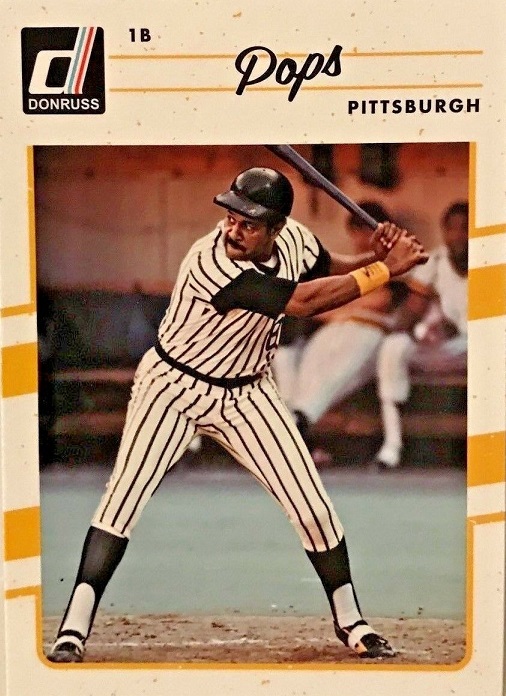 This card is a short printed card in the Donruss set. Not every Stargell card says Pops on the front for his name. A majority of the ones you find for sale have Willie Stargell on the front. There are also nickname variations for other players in the 195-card set. This was the first time I’ve looked into any cards from this set and I realized that it has a ton of inserts, many of them very hard to find. This Pops card isn’t one of those rare cards, but it’s still a great subset to attempt to collect. He’s also part of a subset of retired greats, such as Cal Ripken Jr., Pete Rose, Duke Snider and Willie McCovey, just to name a few of the 17 players.

There is one big issue with this card. Donruss apparently didn’t have permission to use MLB trademarked names or images (more on that below). Notice that you can’t find the “P” logo on the front of this card and the team name is just listed as Pittsburgh, with nothing else. That takes away a little of the interest for me, but it’s still Willie Stargell, so any card of him is going to be one that interests many Pirates fans. 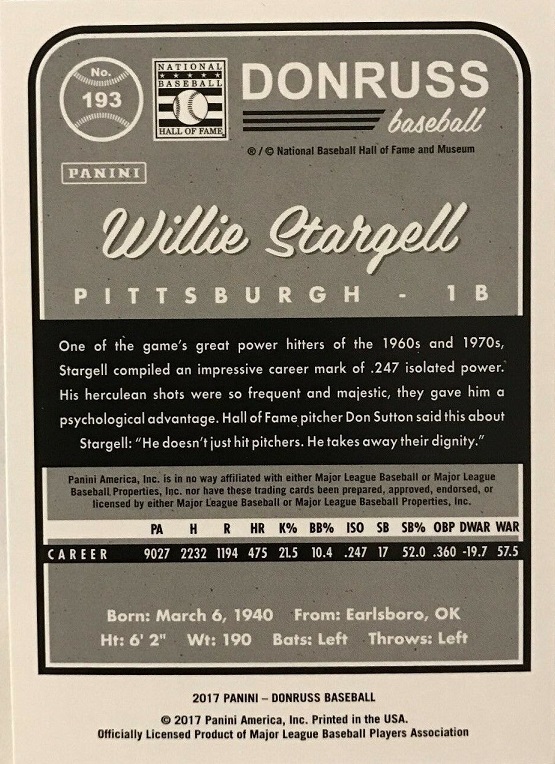 As you can see on the back, there’s no mention of the Pirates or a team logo anywhere. In fact, after the little bio section for Stargell, they have a rather long disclaimer saying that they aren’t affiliated with Major League Baseball and they aren’t “prepared by, approved, endorsed or licensed” by Major League Baseball. However, at the bottom of the card it says that they are licensed by the MLB Players Association. Nothing like the back of a card being filled with a bunch of legal talk.

The quote here is great, coming from Hall of Fame pitcher Don Sutton, who just recently passed away (it’s been a rough 13 months for the Hall of Fame!). Sutton said that Stargell “Doesn’t just hit pitchers. He takes away their dignity”. The back here only has career stats and it’s a bunch of fancy new stats that you didn’t see on cards back when Stargell was playing. That dWAR total was an unnecessary jab at someone known for his prodigious home runs and clutch hitting.

If you’re interested in this card, you can find a few for sale on Ebay for about $3 each, including shipping. You could also go for the Willie Stargell option for about the same price, or a bunch of different insert cards in the set, including a gold press proof, a magenta back, a “stat line” card numbered to 500, and a gray border numbered to 199. That’s not all of the options, just the ones currently available on Ebay.