Today’s Card of the Day features another first-time player in this series, something I’ve been doing quite a few times recently. The Pittsburgh Pirates acquired catcher Smoky Burgess from the Cincinnati Reds on this date in 1959. Four years later, Fleer put out a baseball card set consisting of 66 cards and an unnumbered checklist. There were five Pirates in the set, including Hall of Famers Roberto Clemente and Bill Mazeroski, as well as card #55, which featured Forrest “Smoky” Burgess, one of the best pinch-hitters in baseball history. 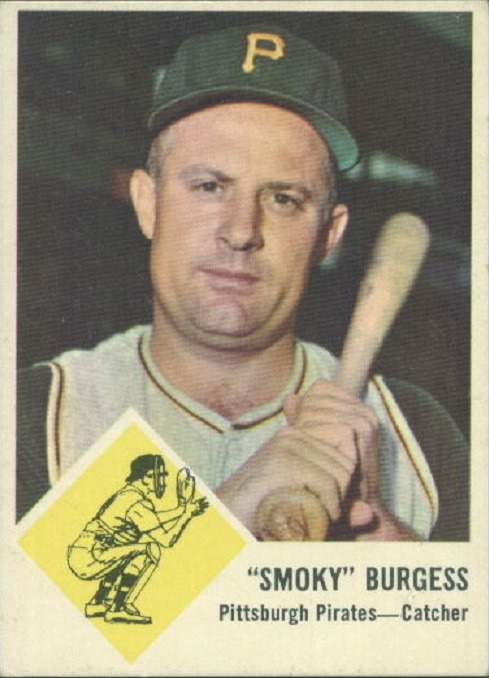 These Fleer cards have a fairly simple design with a large photo and plain white borders, with nothing fancy for the writing on the front. The front of the card has his name listed as “Smoky” Burgess, letting you know it’s a nickname, without letting you know his actual first name. More on that in the back section below. I like the drawing of a player in the bottom corner in a diamond shape matching the position they played. That’s something that Topps would mimic in their 1976 set, with the only real difference being that Fleer gave some of the players batting pose drawings instead of showing them at their position, which Topps didn’t do. Speaking of Topps, they sued Fleer to keep them from producing sets using current players and they won the lawsuit. Topps had a stranglehold on the market at the time, something that they wouldn’t give up until Fleer (along with Donruss) won the right to produce sets in 1981. That’s why this set consisted of just 66 cards and there wasn’t any type of follow up in 1964. 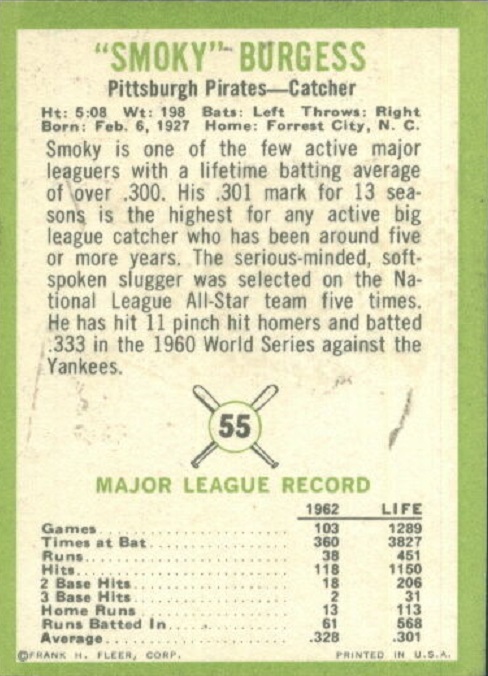 The back also has “Smoky” listed as the first name here, which is a bit different. Usually the back wouldn’t only have a nickname under the bio information. As the back notes, Burgess was an excellent hitter, who did well as a pinch-hitter and he was recognized five times for his overall contributions with All-Star selections. They also note that he batted .333 during the 1960 World Series against the New York Yankees.

This card is surprisingly easy to find on Ebay and if you’re just looking for a nice presentable card, you can get one for about $8-$10 delivered, with many options in that price range. Even really nice looking ungraded versions shouldn’t cost you more than $15. If you want to go for a nice graded one, you can get a PSA 7 for about $30-$35, and a PSA 8 is currently (as of this writing) for sale for $60. A PSA 9 recently sold for $92. So even the nicest ones available of this 58-year-old card won’t cost you a small fortune.