Today’s Card of the Day features a man traded away by the Pittsburgh Pirates 50 years ago today. It’s also his first appearance in our Card of the Day series. I went with something a little different to introduce outfielder Matty Alou to this series. This is our first O-Pee-Chee card featured here, the Canadian cousin to Topps. During the 1969 season, Alou was selected to the National League All-Star team for a second straight season. Topps/O-Pee-Chee included a special subset in their regular sets to mark the honor for 20 players selected to the game. They were called The Sporting News All-Stars. Today’s Card of the Day is #460 in the O-Pee-Chee set, All-Star outfielder Matty Alou. 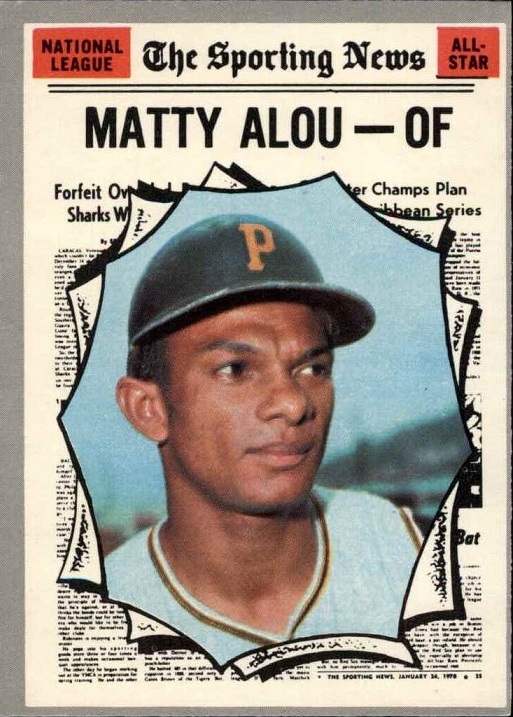 The 1970 Topps/OPC set had a gray border around the cards. That’s basically where the similarities end here between the front of the regular cards and the All-Star subset. The All-Star cards all show players breaking through a newspaper that has their name and position as the headline for the day. At the top you can see how they set it up to look like an issue of The Sporting News, along with the league name in one top corner and the word “ALL-STAR” in the other corner. Then it included a headshot of each player, though four players in the set got batting poses instead. 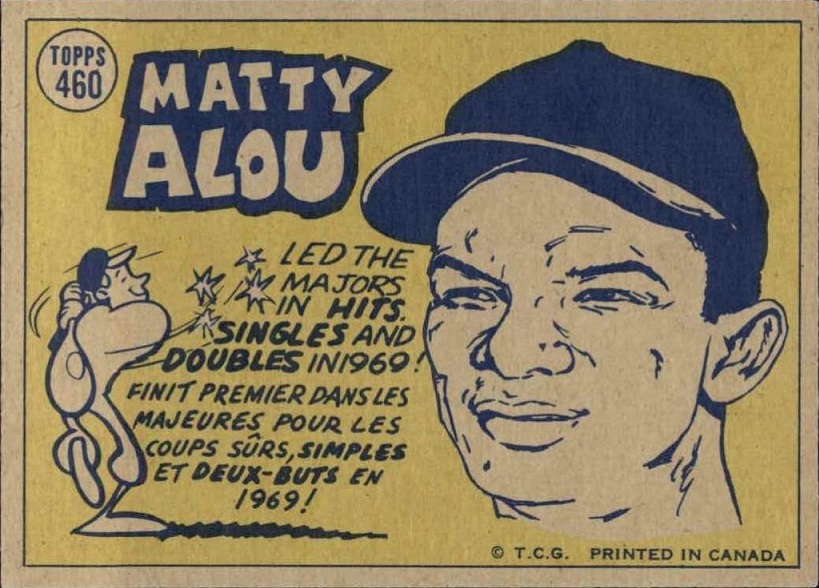 The back shows the real difference between Topps and O-Pee-Chee, though the first thing to notice is that they still let you know it’s a Topps product. The number in the top left corner still has the feel of a regular Topps card with the word Topps is a circle with the card number. Then you get Alou’s name in big letters, along with the generic gray cartoon players that everyone got during the early years of Topps. Off to the side however, they have a cartoon photo that is a great likeness of Alou. There’s a small fact about Alou from the 1969 season, as he led the league in hits, singles and doubles. He also led in at-bats and plate appearances, though he didn’t lead the league with 162 games played. The Chicago Cubs played 163 games that year and Hall of Famer Billy Williams played every game.

After all of that stuff, you get to the real difference. There is a french translation of the fun fact for Alou’s 1969 season. That’s the easiest/main way to tell the OPC set apart from the Topps. The second way to tell them apart is a little more subtle. The OPC cards have “printed in Canada” in the bottom right corner. Topps cards have “Prtd in U.S.A.” in the bottom right corner. The abbreviation of “printed” is humorous to me because all they needed to do was either use smaller print or start it closer to the left side. There was no good reason to abbreviate a word when you control the size and starting point like that. It would be different if it was a word you see abbreviated occasionally, such as approx. for approximately, or maybe abbr. for abbreviate, but “printed” isn’t exactly a popular one to abbreviate. The part that makes it funnier to me is that they had no trouble fitting it on the OPC card, as if the word Canada is shorter than U.S.A. I digress.

These cards are much harder to find than the regular Topps version, but it really doesn’t add to the price because they aren’t as popular. Supply vs demand keeps the price about the same as the Topps card, and you can find a few of them in the $3-$4 range (delivered) on Ebay. Where you’ll have trouble here is if you like buying graded cards. Finding a graded version of this card might be very tough. There are currently none on Ebay for live auctions or completed ones over the last three months. However, you can find eight PSA graded copies for sale now of the Topps version.