Today’s Card of the Day features a man who played a big part in the Pittsburgh Pirates second World Series title. Emil Yde had a short big league career with a huge peak. His rookie season in 1924 was outstanding, with a 16-3, 2.83 record in 194 innings, with a league leading four shutouts. The Pirates took the World Series title the next year and he won 17 games while pitching 204 innings. He actually pitched better in 1926, though it didn’t show in his win-loss record. By 1927, he played a bit part on the first place Pirates team, then got sold to the minors. He made it back for one more big league season, but he was done in the majors just five years after an incredible start to his career. Today’s Card of the Day highlights the peak of his career. It was put out by The Sporting News Publishing Company in a set that featured photos from the collection of famous sports photographer Charles Conlon. Card #546 in the 1992 set was Pirates pitcher Emil Yde. 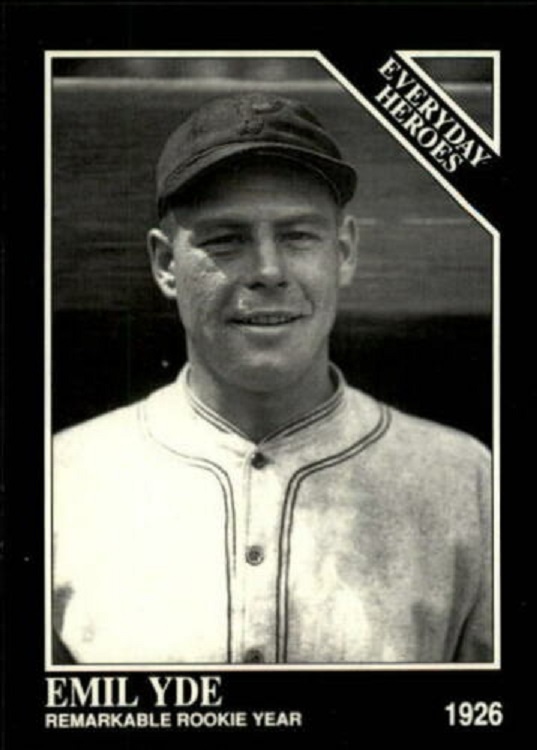 This card had the tag “everyday heroes”, which was a subset in the 1992 Sporting News set. For Yde, they noted at the bottom under his name that he had a remarkable rookie year. In the other corner, it says “1926”, which is a bit confusing considering that Yde was a rookie in 1924. I’m not sure if it was a mistake, or it’s noting that the photo was taken in 1926 (which is true). 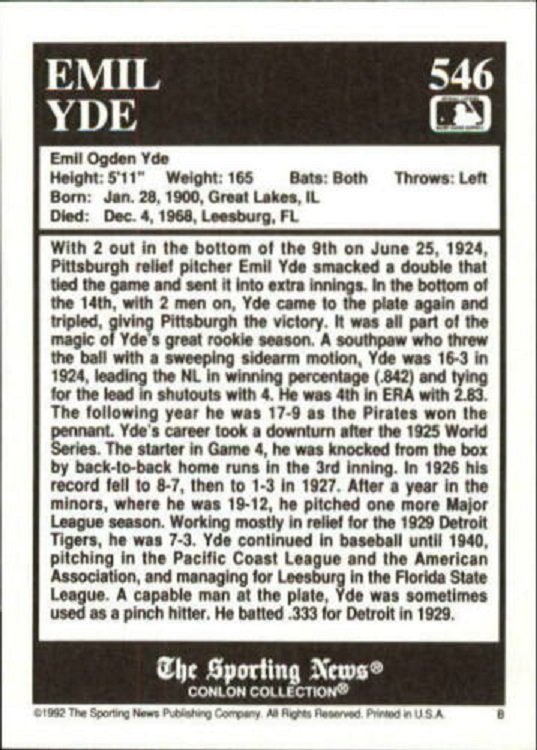 The backs of these cards were great because each of them had bios for the players on the front. In this case, they didn’t even include stats, though the bio covered every season during his big league career and even some of his time in the minors. The card starts off with a recap of a great game at the plate by Yde on June 25, 1924 in which he tied the score with a hit, then collected a walk-off triple. What that recap fails tell you might actually be more impressive. He pitched 10.1 innings that day and allowed just one run. The opposing pitcher that he battled and tripled against was Hall of Famer Grover Alexander, who went the distance in the 14-inning loss. The back notes that Yde saw his record fall to 8-7 in 1926, though it should be pointed out that he actually had a better season than he did in 1925, he just didn’t get the offensive support in 1926.

These cards can be found for a cheap price on Ebay, though it’s not always easy to find individual cards from the set. We have featured this set before with a card for Carmen Hill, a pitcher who was a teammate of Yde during his time in Pittsburgh. Both players had huge peaks and not much else, which kept them from appearing in many/any baseball card sets while they were with the Pirates. These Conlon cards give you a chance to get cards of those players, featuring actual photos from the era. That fact hasn’t helped the prices over the years, so whenever you find a card of Yde, you’re usually paying more for the shipping than the card itself. There were six examples of the Yde card available on Ebay when I wrote this article up and they ranged in price from $1.75 to $4.98. There’s also an actual original Conlon photo of him available as well for $250, though it’s not the one used on this card.