Today’s Card of the Day features the man who signed with the Pittsburgh Pirates as an amateur free agent 45 years ago today. The Pirates signed 18-year-old right-handed pitcher Pascual Perez out of the Dominican Republic on January 27, 1976 and it took him four years to make it to the majors. By 1981, he was on a three-player rookie card that included a young catcher named Tony Pena. By 1982, Perez was good enough to have his own card. Topps gave him card #383 and then forgot one major detail on the card during the first printing that has added a lot of value to his card and made it highly sought after by 1980s collectors.

Here’s the front of the error card: 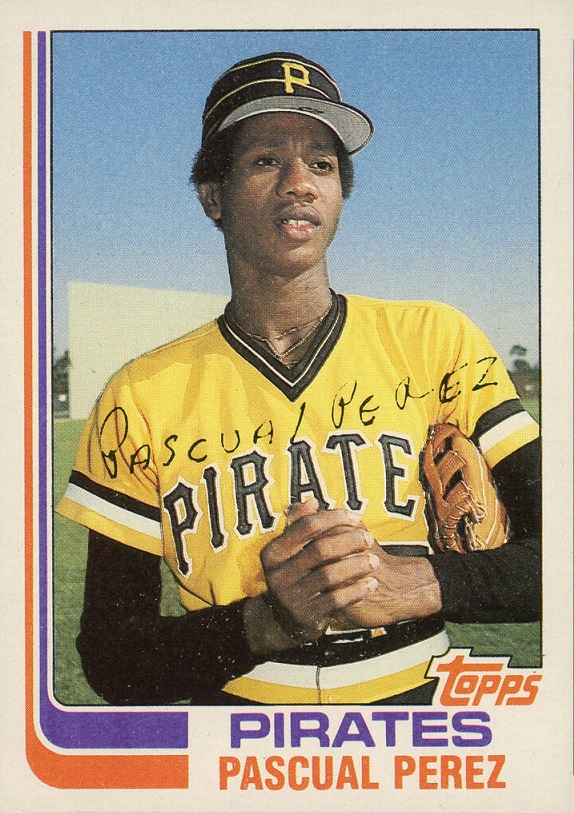 As you probably can’t tell without the comparison, there is something missing on this card. Here’s the corrected version: 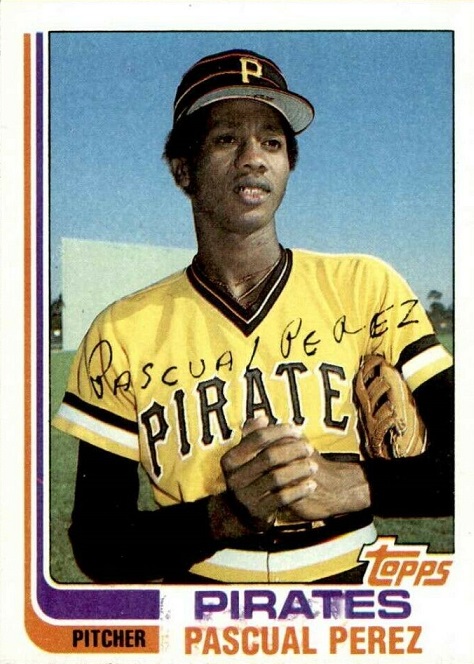 Down at the bottom left-hand corner, you can see the word “PITCHER” in the orange stripe. All of the players have their position listed there in the 1982 Topps set. That position listing is missing from the top card. The error card is fairly tough to find, though if you’re looking to buy it off of Ebay, it will seem a bit more common than it really is compared to the corrected version. That’s because people are more likely to sell the error, and also more likely to ask a high price for the error compared to the actual value (see below) so it stays listed for a longer time. As of the time of this write-up, there are 42 auctions for 1982 Topps Perez cards and six are for the error. That doesn’t mean that one out of every seven of the 1982 Topps Perez cards is likely to be an error. It’s probably close to one out of every twenty.

The 1982 Topps set included facsimile autographs for players. I don’t know if he learned to do autographs after submitting his example for this card, but Perez actually had a really nice autograph. They are slightly tougher to find and somewhat collectible because he passed away at age 55 in 2012. 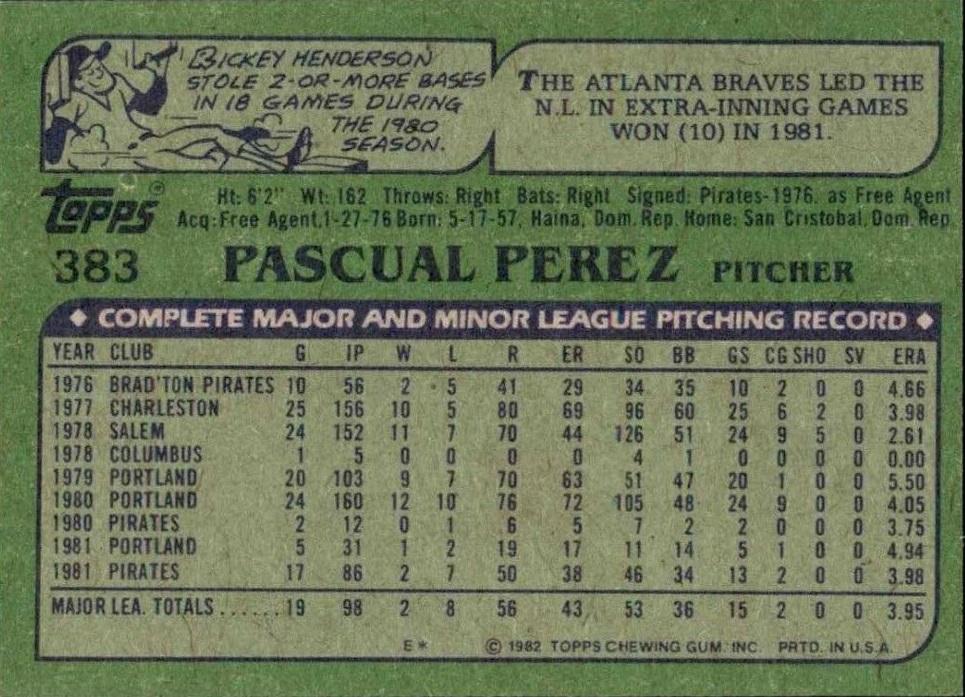 The back has his complete stats, starting with 1976 for the Bradenton Pirates, which was the Gulf Coast League team. As you can see, Perez really broke out in 1978, lowering his ERA and raising his strikeouts, which led to him being promoted to Triple-A (Columbus) for one start. He even threw five shutouts that season, which is about 3-4 more than you will see in a typical minor league season now for the entire organization. The Pirates moved their Triple-A affiliate to Portland in 1979, going from the International League to the Pacific Coast League. The move came with a change to a league that is known more for offense now, but the Pirates actually saw a drop in their Triple-A ERA from Columbus to Portland. You needed to know that to see that Perez really had a poor 1979 season, which is why he didn’t debut in the majors until 1980, when he made two spot starts for the Pirates. He then saw regular playing time in the majors in 1981, with his stats limited somewhat due to the mid-season strike that year.

Topps included cartoons in 1982 at the top whenever there was enough room to include the cartoon. A veteran like Willie Stargell wouldn’t have room due to all of the stats lines, but the younger players like Perez had room to fill. Usually the cartoons had nothing to do with the players, though in this instance, Perez ended up on the Atlanta Braves early in the 1982 season, so there’s a little connection that was unknown at the time of printing.

The error card here is expensive for a 1982 Topps card. There are six on Ebay right now and they sell for about $35 ungraded and slightly more graded, though obviously the higher the grade, the more you will pay. The problem is finding people willing to sell the card for what it’s worth, so it’s better to wait for an auction listing to come up instead of a Buy It Now style listing. The corrected version is slightly tougher to find than your average common in the set, but that doesn’t add to the price. You can find it for about $2 delivered. Some people will sell them as a pair and you’re basically just paying for the error when that happens.