Today’s Card of the Day isn’t what I was looking for to feature today, but it found me. I was looking through our 100+ Card of the Day articles to see if any big names were missing and I quickly realized that we have never featured Lloyd Waner in this series. How could I go this long without one mention of a Hall of Fame outfielder who spent 17 seasons in Pittsburgh? Well, I did it and I’m not proud. I started looking for scans of Waner cards, seeing which one would really catch my eye. After all, I haven’t featured him here yet, so I had his entire run of cards to choose from. Then about 5-6 photos into my search, I saw a card that I just had to post today. I promise I’ll get a solo Lloyd Waner card soon, but for now, check out the 1935 Goudey 4-in-1 card featuring Lloyd Waner, Paul Waner, Waite Hoyt and Guy Bush. That’s three Hall of Famers and a guy (Guy) who won 176 games during his career. 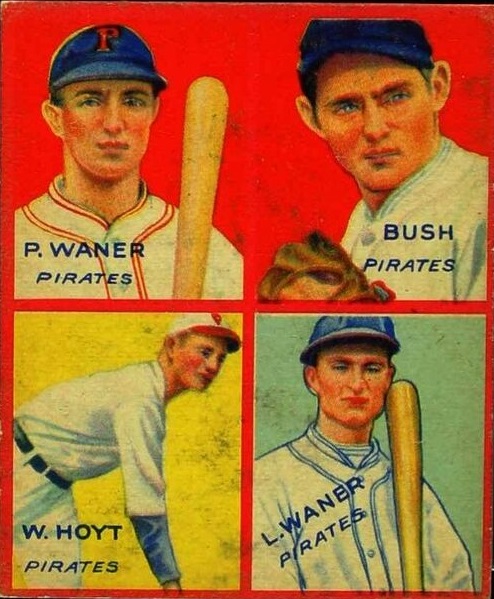 Isn’t it a beauty?  I’m sure you’ve figured out where the “4-in-1” name comes from by now. You have Big Poison in the top left-hand corner, the non-Hall of Famer with 176 wins to his side, with Hall of Fame pitcher Waite Hoyt in the bottom left, and the Little Poison who led me here in the bottom right corner. If you collect old cards, this might look familiar to you, even if you’ve never seen this particular card. That’s because all four of these artist renditions were the exact same poses/colors used for these players in the 1933 Goudey set on their individual cards. The three Hall of Famers were on the Pirates when that 1933 Goudey set was put out. Bush was on the Chicago Cubs at the time and his corner here is cropped so you can’t see the bear patch on the sleeve, or the word “Chicago” across the chest, though you can make out a little bit of the “A” just above his glove. The 1933 Goudey set is extremely popular with vintage collectors now. This particular set isn’t in the same category, but this player combo makes it a great card for Pirates collectors.

Below is a scan of the back of the card, which is a puzzle of Frankie Frisch. One of the interesting things that Goudey did to draw added attention to this small set was including nine different puzzles on the back. The set had just 36 cards total, so it wasn’t difficult to complete (still isn’t actually, though price can be an obstacle). However, those 36 cards didn’t give you all of the pieces to the nine back puzzles, so if you were collecting back then, you might be buying these cards for a little while before you got all of the back pieces. 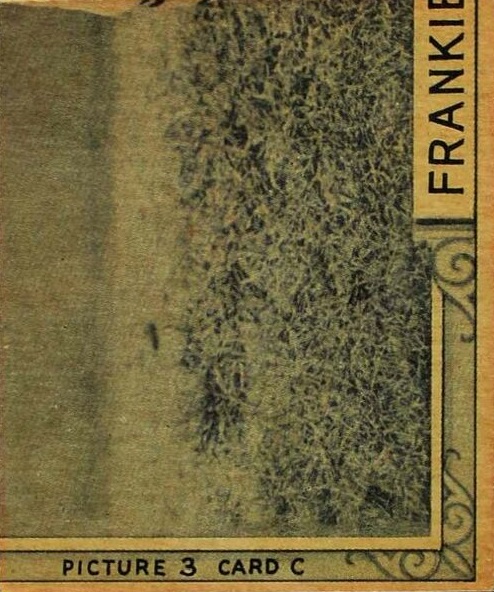 So now the obvious question becomes…how much do I have to pay to get this 86-year-old card with three Pirates Hall of Famers? This particular scan (which was pulled from Ebay) shows a PSA 5 card that is for sale for $320.  The price on these cards skyrockets for higher grades, with multiple listings of $1,500+ for PSA 7 options. So in comparison, that $320 is a good price. That’s still probably out of the price range of most people, so you’ll be happy to know that there are other options. A PSA 2, that is still presentable, is just over $100, with a best offer option. If that’s still out of your range, there are a couple of lower grade ones for $45 and $75, but the condition fits the price. They have been well loved cards over the years. If you really like the card, you can grab a reprint for a few bucks.