Today’s Card of the Day is a two-player card that some collectors back in the day made into two different cards. The 1941 Double Play set features 150 cards, sort of. The cards were numbered to 150, but every card came with two players, so you only needed to find 75 cards back then to complete the set. The set featured numerous Hall of Fame players, including today’s featured card showing two players on the Pittsburgh Pirates. Here’s card #33/34 in the set, showing the left side of the Pirates infield, with third baseman Lee Handley and Hall of Fame shortstop Arky Vaughan. 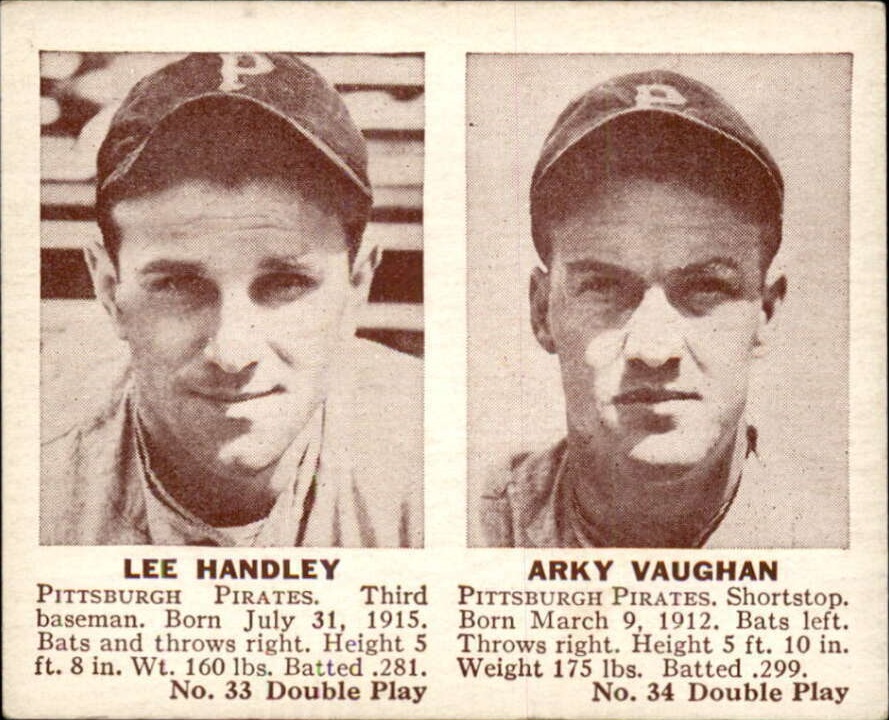 As you can see on the front, there are two players from the Pittsburgh Pirates and they each have a small section with some bio information. There’s also a blank space in the middle, and at the bottom you can see the card numbers, “No. 33” for Handley and “No. 34” for Vaughan. Basically, the company was encouraging people to cut these into two separate cards and that occasionally happened. We recently featured a strip card here from the W514 set and those came out in strips of cards, but they were cut into separate cards about 99% of the time. It’s tough to find a full strip now. The difference between those cards and the Double Play cards, which were probably cut about 10% of the time, is that strip cards had dotted lines to guide you for the cuts. People rarely did a 80 grade job of cutting them, but they gave it the ole college try more often than not.

I actually have an interesting story about cutting Double Play cards, which I will keep short. A few years ago I wanted to get all of the Pirates players in the set. That’s not as tough as it sounds. There’s this featured card, another one with Deb Garms and Elbie Fletcher, and a third one with Bob Klinger and Mace Brown. The problem came up with the seventh and final Pirates card in the set. It’s a second Bob Klinger card and he’s pictured with Stan Hack of the Chicago Cubs. I didn’t want no stinkin’ Cubs hack in my Pirates set, but I managed to find a cut version of that card, with a solo Bob Klinger for sale on Ebay. Since it was cut, it really cut (pun intended) into the value of the card, but it was exactly what I wanted. So I have the Pirates team set and it’s only Pirates.

There are a couple of small mistakes on the front of this card. The stats are from the 1940 season and Vaughan batted .300 that season, not .299, as mentioned above. That would actually probably be a big deal to some players, as the only players who would be happy hitting .299 in a season are the players who batted under .299 during that season. The other small mistake is in the birthday for Handley. He was born on July 13th, not the 31st.

This is not an expensive card and you have multiple options to choose from if you head over to Ebay (they should really sponsor these articles by now). You can find a nice condition card ungraded for about $20. Grading them adds a little value on the low-end grades and a lot on the upper end. A PSA 7 recently sold for $350. Ungraded that would likely sell for about 1/5th of that price. I put the whole Pirates set together for under $100 (probably close to $75), and since this is the most expensive one from that group, then you might consider going for that goal if you’re going to grab this particular card. You might have trouble finding the Klinger without the Hack, but please don’t buy the full card and create your own.