Today’s Card of the Day features a former Pittsburgh Pirates pitcher who turns 67 years old today. It’s his rookie card, but he’s overshadowed by another rookie on that card. In fact, three of the players on this card titled “Rookie Pitchers” have ties to the Pirates. Unfortunately for the 1980s Pirates, the one player not connected to them was by far the best on this card. Today’s card is #703 in the 1978 Topps set featuring Timothy Jones of the Pirates, Larry Andersen of the Cleveland Indians, Mickey Mahler of the Atlanta Braves and Hall of Fame pitcher Jack Morris from the Detroit Tigers. 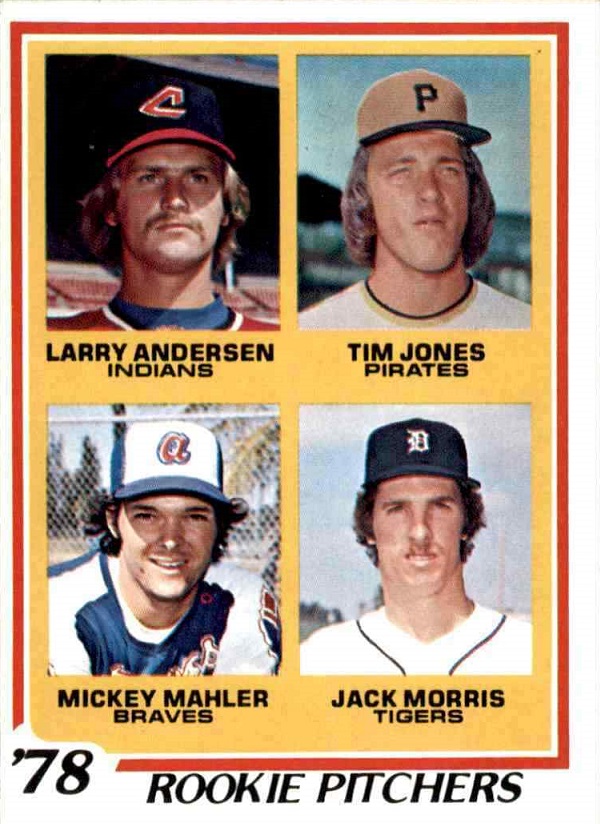 If you look close at the photo of Jones, you can’t unsee the bad airbrush job of adding a hat to his card. The worst part is that they added a 1976 hat to a player who debuted in 1977 when they had already stopped wearing that style cap. I really like the old school jerseys, especially the Braves and Indians offerings here. The Tigers had the classic look, so you really can’t tell what year it is by looking at just the jersey and hat.

This card definitely had four different levels as far as how a career could go in the majors. Jones threw ten shutout innings for the Pirates in 1977, was traded shortly after this card was released, then retired after the 1978 season, which he spent in Triple-A. A career 0.00 ERA is great, but not when your big league career is limited to ten innings.

Mahler was a guy who bounced around, ending up pitching parts of eight seasons in the majors, though it amounted to 122 games total. He was briefly with the Pirates during the 1980 season. He’s not a cup of coffee guy and not a regular like the next fellow.

Andersen was a member of the Pirates in the minors for ten months, during most of the 1980 calendar year. For Portland (Triple-A) that season, Mahler won 14 games and Andersen picked up 15 saves, so there’s a good chance that those two stats were added to in the same game. Andersen pitched 17 years in the majors and had a pretty good career that consisted of 699 appearances and a 3.15 ERA. That’s a nice second fiddle on this rookie card.

Morris is in the Hall of Fame, and in my opinion, it took him way too long to get there. He led three different teams to World Series titles, winning in Detroit, Minnesota and Toronto. He won 254 games and he was an absolute workhorse during his career, six times finishing among the top three in innings pitched. 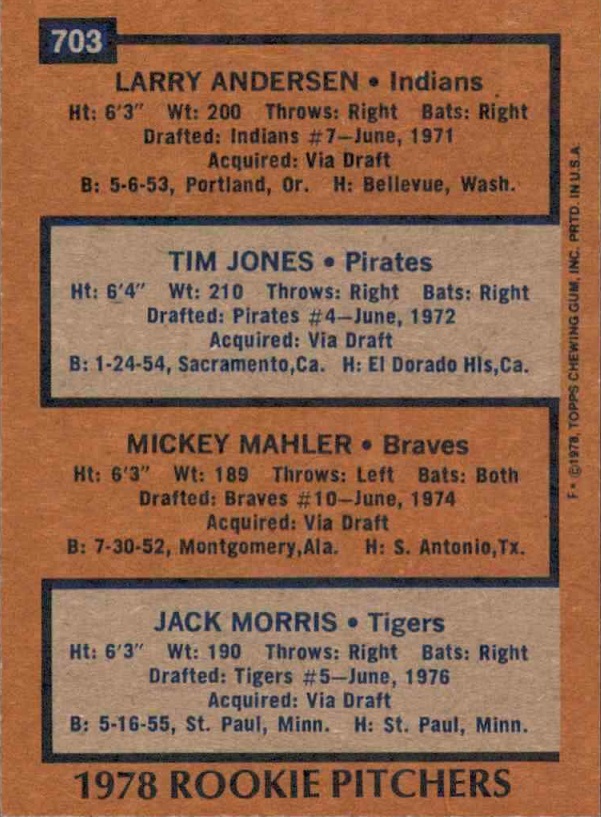 If you were looking to see which one of these prospects might be the best, the back of the card doesn’t give you much help because there are no stats. All you could rely on for each player is the round that they were drafted in and their age. A high draft pick, who is very young, would be your best bet. Players usually made it on to these cards in either the year that they are expected to break into the majors, or they already had a bit of big league time. That means that you’re probably not looking at anyone who is 2-3 years away from the majors on one of these cards. Pretending that we knew nothing else, then Morris would probably be the top choice here, followed by Jones, Andersen and Mahler. Morris is 16 months younger than anyone else on the card, and at that age for a baseball prospect that’s a significant total. Interestingly enough, none of these guys were high draft picks, so it probably wasn’t the most exciting group to those who were opening up packs back then.

This card is still fairly cheap considering that it has a Hall of Famer on the front. The reason that you can get it cheap is that it is very easy to find. Ebay has about 700 active auctions right now for this card and some lower grade ones have recently sold for under $2. That’s the same that you’re paying for common cards from this era because of the shipping charge and Ebay fees making it useless to sell any cheaper for most people. On the other end of the spectrum, there have been some of these cards that were graded PSA 10 for sale recently and they have sold for much more than $2 each. Four of them have sold for $750+ in the last three months. So if you’re sitting on one of these in perfect condition, you might want to get it graded and see if you can hit that magical PSA 10 grade that turns the card into a nice pay day.