Today’s Card of the Day features a Hall of Fame manager, who the Pittsburgh Pirates traded away 100 years ago today, back when he was a steady outfielder. Billy Southworth played three seasons for the Pirates (1918-20) during the early part of his playing career. That wasn’t a popular time for producing baseball cards, but he managed to get into a small set while with the Pirates. Today’s card is #16 in the strip card set designated as W514 and it features Billy Southworth, the player.

Here’s the front of the card (the backs are blank): 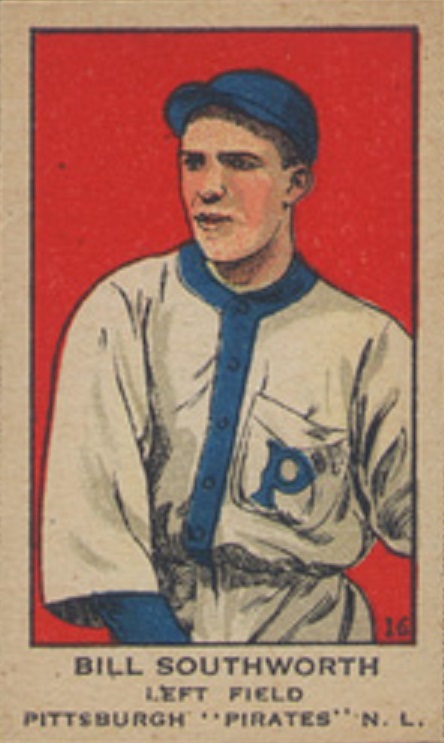 We have featured a few strip cards in our Card of the Day series, but we mostly avoid them because there are a lot of crude drawings in the set. There isn’t a lot of visual proof of Southworth with the Pirates, but this artist rendition seems to be based off of this photo shown below: 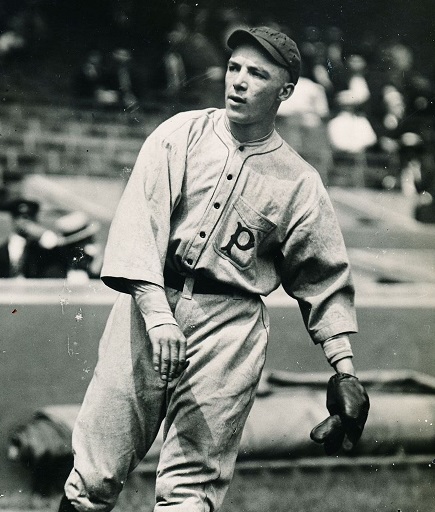 Even if it’s not this exact photo depicted on the card, it’s close, which isn’t something you can say for many strip cards. Southworth got one of the nicer examples from this era. There are some questions based on player/team designations about the year/years of this set. Southworth helps a little here because he only played left field for the Pirates in 1919. Obviously it wouldn’t have been produced before he moved from right field to left at the start of the 1919 season. He moved back to right field for good on August 8th, so it likely wasn’t produced after the 1919 season ended because he went two months of the season (46 games) without a day in left field. That tells you that the set was probably produced in the summer of 1919, giving them enough time to realize he was in left field, while also allowing some time for his move back to right field mid-season to become permanent.

The blue on the collar and down the middle here was not part of the Pirates uniform during that time, though they did have blue in their colors. However, the black & white photo above has a red “P” on the left pocket, not blue. The blue lettering there came along in 1920. At that same time, the Pirates dropped the solid blue hats, so that color combo didn’t exist during his time in Pittsburgh. An artist was likely going off black & white photos with some notes, so I can’t really blame them for the errors.

Some people consider this to be Southworth’s rookie card. He had one earlier card, produced by a major company called Zeenut in 1916. The rookie controversy here comes from the Zeenut card featuring him as a minor league player, making this strip card his first Major League card, and for some people, his rookie card. There’s no correct answer here, it’s just the preference of the individual collector. I’ve even heard of people saying his 1921 American Caramel card being his rookie because it’s his first real photo MLB card. If I had my choice, I’d go for the Zeenut, but to each his own.

The “W514” is just a set designation, with the “W” telling you that it’s a strip card set and the 514 is a random number assigned to the set once they were all catalogued by a man named Jefferson Burdick many years after this set was produced. The card above came in a strip with other cards and it was cut by hand. Many times those cuts were made by kids who were apparently new to scissors and now you can find plenty of strip cards that are far from looking like the rectangular shape that was intended by the manufacturer. If the person cutting the cards was careful, you can still see remnants of the dotted lines they used as separators between cards on the same strip. The cards in the middle of the strip could have dotted lines on each side.

If you’re interested in purchasing this card, then there are four options available on Ebay at the time of this writing. One of them is graded a PSA 6, which is certainly a high grade for a hand-cut card. That seller is asking $750 for his card. Next up is a PSA 5 for $334 from a reliable seller I’ve dealt with numerous times. There’s also one graded “Authentic” which means it’s real, but they can’t grade it, likely because of the poor cutting job. That one has a $150 price tag with a best offer. The other one is for sale for $100 and it is ungraded and not as nice, though it’s still very presentable. Good news is that three of them have make offer options. You could also wait for an auction-style listing and try your luck there. You could probably get a better deal than the lower priced one here through an auction listing. If you’re too impatient though, then good luck with your offer for the cheaper one…or one of the higher-priced ones, who am I to tell you how to spend your money.