Back on October 6th, we posted a Card of the Day article that features a 1971 Topps card showing Gene Clines and Fred Cambria as rookies. The reason I chose that specific day to post it was because it was Clines’ 74th birthday. Fred Cambria just tagged along that day. Today is the 73rd birthday of Cambria and Topps helped us out here by putting him on another rookie card, and this one has a twist to it too. Obviously Cambria can’t have two rookie cards from the same set in different years, but Richie Zisk is also featured on this card and this is his rookie card. I’ll save the twist for a little later. 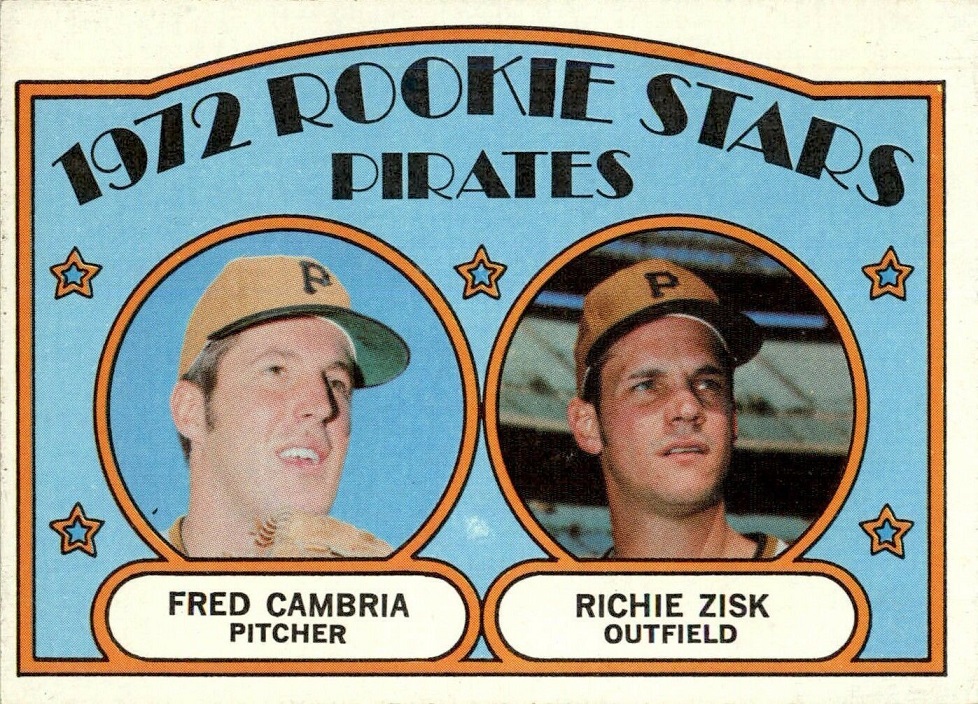 The 1972 Topps set gives the 1975 set design a great run for the title of most 1970’s looking set. I think if you got rid of the players here, and the big 1972 at the top obviously, most people would still come within 2-3 years if they made a guess on the year that Topps used this design. All of the Pirates in this set came with light blue and orange colors used on the front. Topps used certain color combos twice in this set, pairing up National League and American League teams. The Pirates were matched up with the Minnesota Twins in 1972.

Topps used a slightly different pose for Cambria’s photo in this set. His facial expression/direction is almost the same as his 1971 Topps card, but the glove can’t be seen in that photo. The original appears to just be a portrait photo, while this would be a full posed “action” shot that is cropped close for the small photo space available on a two-player card. Zisk is missing the mustache that most of you probably remember him having throughout most of his career. The twist here is that not only did Cambria get a second rookie card, Topps also gave one to Zisk. He’s part of a 1973 card that shows three rookie outfielders, with the other two rookies on the card being American League players. 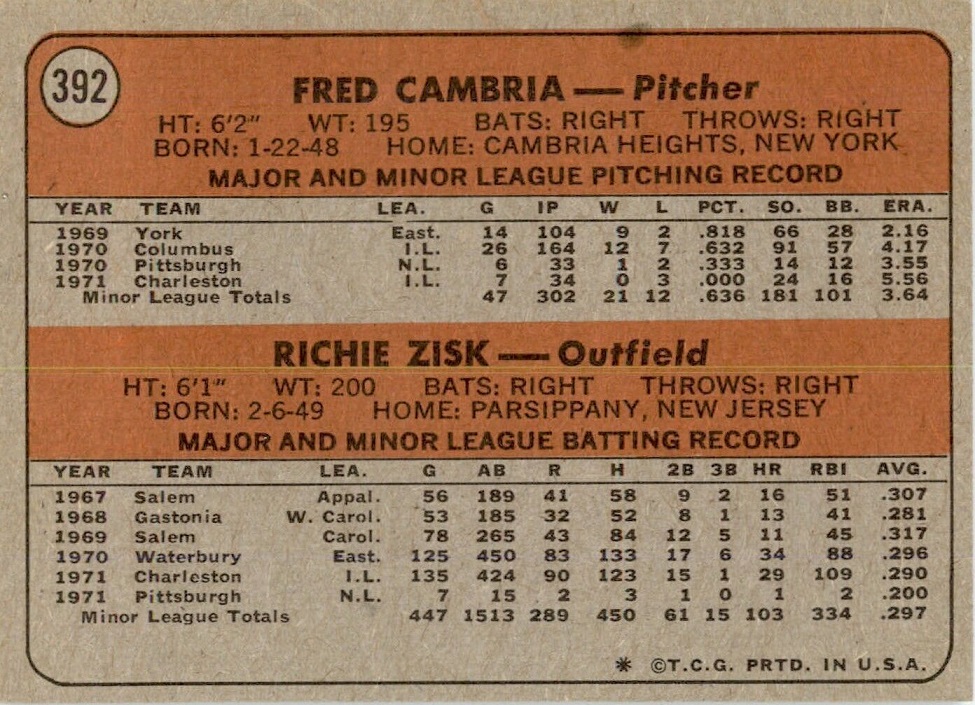 The backs of these cards are great because of the amount of stats that we see here. In some other years, Topps didn’t even include any stats for rookies. This year they not only posted current stats for the players, but they have their entire minor league records too. Unfortunately for Cambria, this card shows his entire big league career. He never played in the majors after 1970. He suffered a shoulder injury in 1971 that ended his pro career two years later. Zisk went on to become a star, playing 13 years in the majors. He played just 17 games for the Pirates in 1972, so he was still eligible to be on a rookie card during the following year.

If you’re interested in purchasing this card, you’ll be happy to know that you can find in readily available and cheap on Ebay. There are plenty of options to choose from in the $3-$5 range. Nice high grade copies sell for just a little more. In fact, everything is affordable to the average collector until you get to the Gem Mint condition cards. One graded a PSA 10 recently sold for $350. That’s not bad for a 49-year-old card, graded in perfect condition, but it’s clearly a lot to pay for something that can be bought for $10-$15 and look almost as nice.

In another strange twist to this card, Zisk’s second year card is actually worth more than his rookie, and it’s not because of the other players on the card. His 1973 Topps was included in the high number series. Topps used to release cards is series, and the high number cards never sold as well because they came out later in the season, so they didn’t print as many, making them tougher to find now.