Today’s Card of the Day features a player who was signed as a free agent by the Pittsburgh Pirates 88 years ago today. Hall of Fame pitcher Waite Hoyt was already 33 years old and a 15-year veteran in the majors at the time. During his first season in Pittsburgh, he posted a 2.92 ERA in 117 innings, making occasional starts, while also pitching in long relief. That same year, Goudey released a 240-card set and featured Hoyt in his new team’s colors. Here’s a look at card #60 in the 1933 Goudey set. 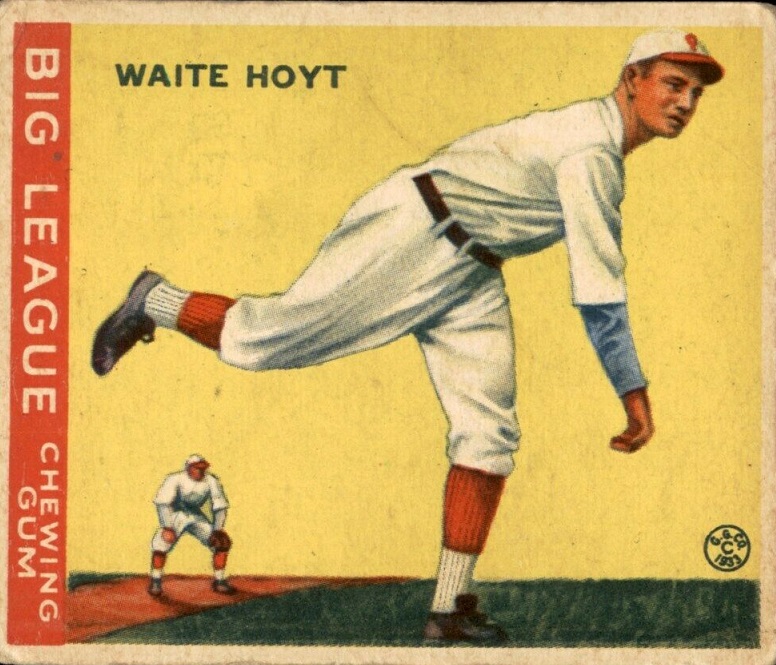 The Pittsburgh Pirates made a major uniform change between 1932 and 1933, but Goudey only got part of the memo and seemed to guess wrong on the rest. After all, they were probably going off of black and white photos only, with maybe some notes to help them out. The Pirates added some red to their uniforms in 1933, so that part was correct. The hat here should be all blue, except the “P”, which is correctly shown here as being red. Just below the pant leg, there should be a thin blue stripe, followed by a lot of red, then another thin blue stripe separating the white and red. Due to this pose (which I really like), you can’t see the front of the jersey. The Pirates went from all blue letters to red letters in 1933. They also switched from a “P” on the left chest, to the word “PIRATES” across the front on the road jerseys that year. The home jerseys had just the “P” on the left chest both years.

As I said, I love the action shots here, even if Hoyt seems to be throwing from the grass. I’m guessing that’s supposed to be the shortstop behind him (would likely be Arky Vaughan if it’s based off of a real photo), but the background has nothing else at all, so it’s a bit odd. If you look at it long enough, you might see the person in the background as just being very tiny and he’s not actually back at shortstop, he’s right behind him (insert “short”stop joke here). Anyway, I couldn’t do better artwork, so I should stop knocking down 88-year-old pictures now. 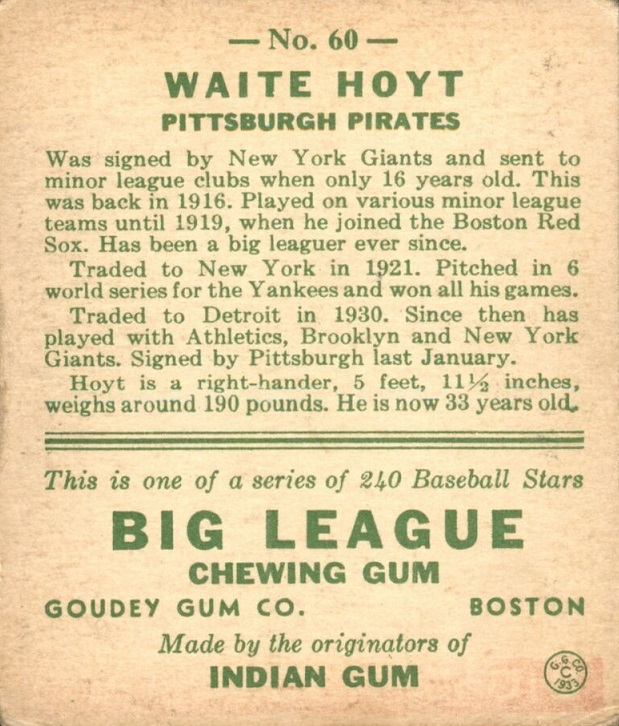 The back has a small bio and a large ad for BIG LEAGUE CHEWING GUM. The back notes that Hoyt was signed by the New York Giants and debuted at 16 years old, then made the majors with the Boston Red Sox in 1919 and has been there ever since. While all of that is true, they do leave out some interesting details. He actually signed with the Giants at 15 years old and worked out with the team, but didn’t play in the minors until the following season. He also debuted in the majors with the Giants in 1918. Hoyt had a ten-year run with the New York Yankees, then played for four different teams over the 1931-32 seasons. The Pirates got him back on track and he remained in Pittsburgh for 4+ seasons. His final win of the 1933 season was the 200th of his career.

You should be interested in purchasing this card because…It’s a Pirates player, it’s a Hall of Famer. It’s an iconic set. It’s a great pose. What more do you want? I wrote this a few days before you’re reading it, but at the time of this writing, there are/were 27 of these cards for sale and five are autographed. That might seem like a lot, but he lived for another 51 years after this set was printed, so he had time to sign a few copies. He was also a Hall of Famer for 15 of those years, so he was a desirable autograph. These cards can go for a lot, though some people like to dream big. There’s a PSA 7 listed for $2,441, while an SGC 84 (same grade as PSA 7) is selling for $975. Go down one grade and they want $725, though that comes with free shipping and a best offer option. Now you might be saying, “Hey John, how about the average collector here with a budget, what about us?”. Stop being impatient, I’m getting to it now. There are seven examples of this card selling for under $100, but all of them are low grade. However, 18 examples have sold over the last three months for under $100, including multiple examples under $50, so you don’t need to pay three-figures to get a nice looking example of this card.