We have posted over 100 Card of the Day articles already and this is the first time that we have featured the 1967 Topps set. There are obviously more than 100 baseball card sets to choose from over the years, but since I mostly avoid newer ones unless they have a throwback design (this is a history site after all), then that makes it a little more surprising that I haven’t featured this set yet. It’s a set you will definitely see more from in the future, with names like Clemente, Stargell, Mazeroski, Veale, Law, Face, Alou, Alley, Mota, Pagliaroni, Clendenon, etc etc all in the set, as well as two rookie stars cards, and a few other special cards with Pittsburgh Pirates players. We start today with a man who was born on this date in 1936 in Monticello, Arkansas. Jesse Gonder spent the final two seasons of his eight-year big league career with the Pirates. Since we have already featured a 1966 Topps card here, his only other regular issue option, I decided to go with his 1967 Topps card, #301 in the set. 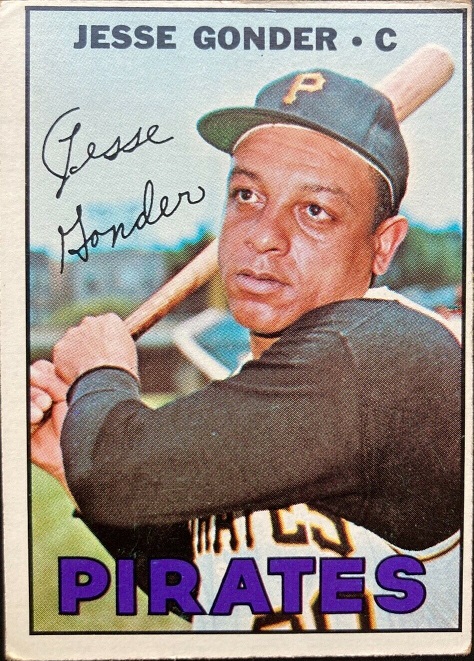 Gonder was a member of the 1960 New York Yankees team that lost to the Pirates in the epic World Series played that year. He would be a part of a World Series winner the following season, then move on to the Cincinnati Reds for the 1962 season. He was in the majors for three seasons at that point, but he played just 26 games total, and only one of those games was as a starter. Things changed for him in 1963 when he was picked up by the expansion New York Mets in their second season. He saw regular playing time during his 24 months with the team, before being traded to the Milwaukee Braves. The Pirates picked him up in the Rule 5 draft after the 1965 season. Gonder played 81 games in his two seasons with the Pirates, 50 of those coming as the starting catcher. The photo of the card up above shows a closeup of the 30-year-old Gonder is a posed follow-through swing from the 1966 season. He was in his 12th season of pro ball at the time. 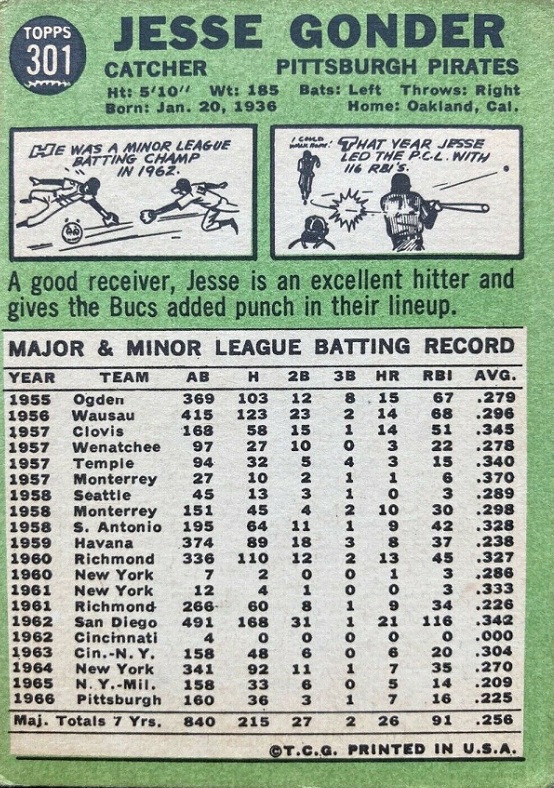 The back of this great because it features every single stop during his career from 1955 through 1966. You find out in the cartoon at the top that he won the Pacific Coast League batting title in 1962, while also leading the league with 116 RBIs. Gonder also set a career high with 21 homers. You almost see his entire big league career represented above. He played 22 games for the 1967 Pirates, then finished his career in the minors, last playing in 1969.

I’m a big fan of the black on white printing for the stats, with the color on back limited to the top and borders. You have to remember that the scan you see above is much bigger than an actual card in hand, so 20 lines of stats would be even harder to read if the dark printing on a light background didn’t make it stand out so much. Topps didn’t always do that over the years, sometimes picking a darker background that made the stats tougher to read. I am a big fan of the front of 1982 Topps cards, but the backs are awful for players like Willie Stargell, who had minuscule printing due to the length of his career.

If you’re interested in purchasing this card, you’ll be elated to know that it could be found readily available on Ebay and the cost will be minimal. There are 100+ auctions available for this card at the time of this writing and about 20 of them are priced between $1.50 and $2.00. One graded a PSA 10 (Gem Mint) sold for $350 in December. The next highest sale in the last three months was $16.50 for one just two grades lower.