Today’s Card of the Day features Laurin Pepper, a right-handed pitcher for the 1954-57 Pittsburgh Pirates. This card comes from the 2005 Topps Heritage set, which used the front/back image from a 1956 Topps card, then put a modern spin on things. Topps had some veteran players from older sets, autograph replicas of their cards. Pepper was one of those players, and his autographed cards come in two varieties, with one of them being much hard to find. 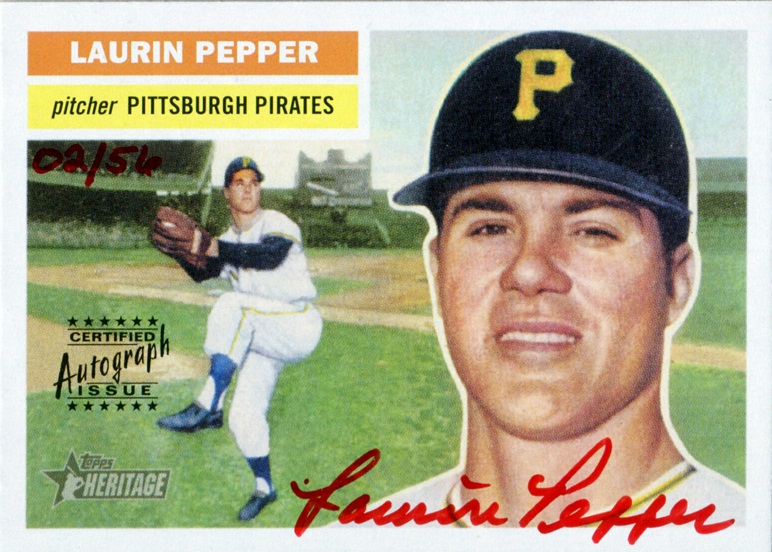 You have to love the smaller photo of him mid-pitch, with the old stadium background. All 1956 Topps cards had an action shot and a larger portrait shot. Topps actually used this same portrait for Pepper in their 1955 set first. The obvious difference here with the modern issue is the Topps Heritage logo in the bottom left corner, as well as the Certified Autograph Issue stamp just above the logo. Pepper had an outstanding autograph, where you can make out every letter in his name, unlike many of today’s players who have no pride in their autograph. The added twist here is the red ink used for the autograph. It’s much easier to find this card autographed in blue ink. That particular version isn’t numbered. The red version is numbered and you can find it right under his name/position/team name in the top left-hand corner.

This particular scan shows 02/56, meaning it was the second one that he signed out of 56 red ink versions. The 01/56 card would actually have a little extra value, as some collectors look for those specific “01” examples for their collection. That also holds true with the final number (56 in this case) and sometimes if the card matches up to the player’s jersey number, then that will add value. That’s usually for players who are recognized for their number. Pepper wore #18, #23 and #31 during his time in Pittsburgh, so all three might have some interest to collectors who look for the jersey numbers. During the 1955-56 season, he was wearing #23, so if the matching number did add value, then you would think that 23/56 would be the most desired one. As I said though, that’s usually reserved for players who are recognized by number. 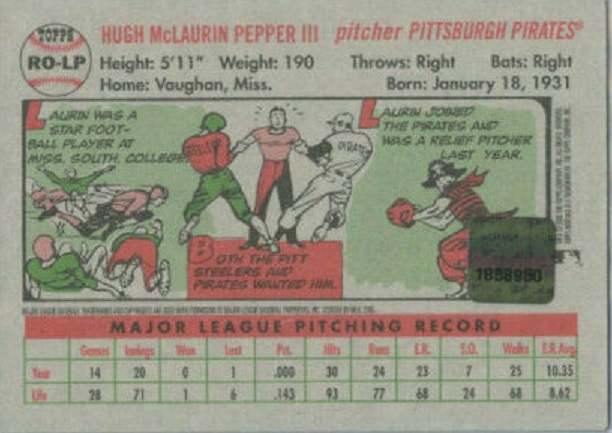 The first thing to notice here is the name. Not only is Laurin not his actual first name, it’s only part of his middle name. Add in the III at the end and you have a great name: Hugh McLaurin Pepper III. The back looks just like the 1956 Topps, except the hologram sticker on the back that lets you know that the autograph on the front is authentic. Topps had cartoons on the back, with generic gray players on every player’s card. As you can see in the third photo, the cartoon suggests that the Pirates actually dress like pirates when they play baseball. Someone was probably pretty proud of that idea. The stats portion of the card showed the stats from the 1955 season, as well as lifetime stats. That’s the same for every player, whether they were rookies or 20-year vets.

The fact that this card is autographed in red makes it worth more than the blue, which wasn’t as limited. This card has three examples currently listed on Ebay and the cheapest one is $36. The only sold one in the last three months (red or blue ink) was a red one that sold for $23. So an auction type setting would probably result in a cheaper price. However, if you just wanted the autographed card and you’re not concerned with the low numbers/ink colors, you can find a blue one for about $20-$25. Pepper’s autograph isn’t that difficult to find because he lived to be 87 years old, passing away in 2018, well into the autograph era. However, this particular set made it much more easier to find before. One of the crazy things with card pricing is that these particular cards are more expensive than autographed copies of his actual 1956 Topps card.