On January 17, 1984, the Pittsburgh Pirates selected catcher Tom Prince in the fourth round of the January-Secondary draft. It was the third time that he was drafted and he still didn’t sign right away. He signed with the Pirates on May 24th and he hit just .214 over 41 games of short-season ball that year. Prince hit .208 the next year, though he showed some power and he drew 96 walks, so he had a respectable OPS. He had a better year at High-A ball in 1986, then broke out in Double-A in 1987, which earned him four late season games with the Pirates. At the same time, a brand of baseball cards named Score broke into the big leagues of card producing with a 660-card set prior to the 1988 season. Prince didn’t make enough of an impression to make that set, but he was included in the 1989 set after he played another 29 games for the Pirates during the 1988 season. Card #626 in the 1989 Score set featured Tom Prince and it is our Card of the Day today. 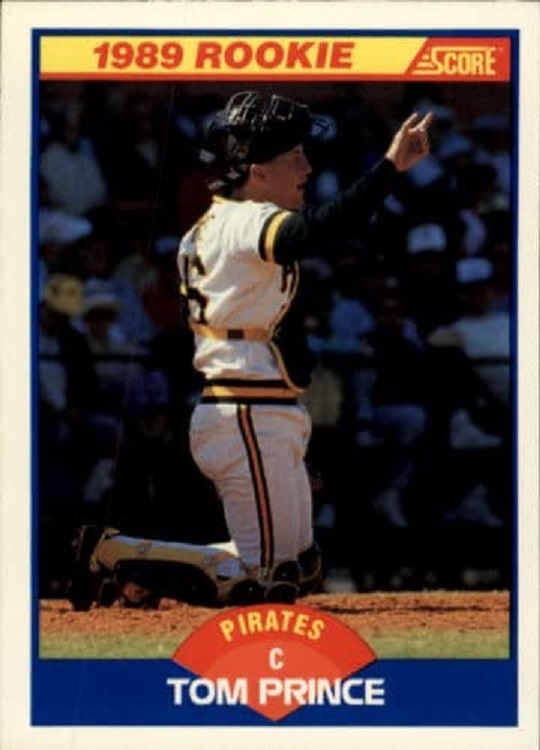 As you can see at the top, Prince was labeled as a 1989 rookie, a special subset of the 1989 Score set (card #621 to #651), which featured 31 rookies from around baseball. I’m a big fan of the catcher poses on cards, especially when they’re not staged poses. This one was taken during game action and it looks like he is telling his teammates that there are two outs in the inning. The blue border on front lets you know that this is a high number card. Score used six different colors on front of these cards, breaking them into six subsets of 110 cards each. So if you were to buy a Pirates team set, there would be six different colors for the front border in the set. 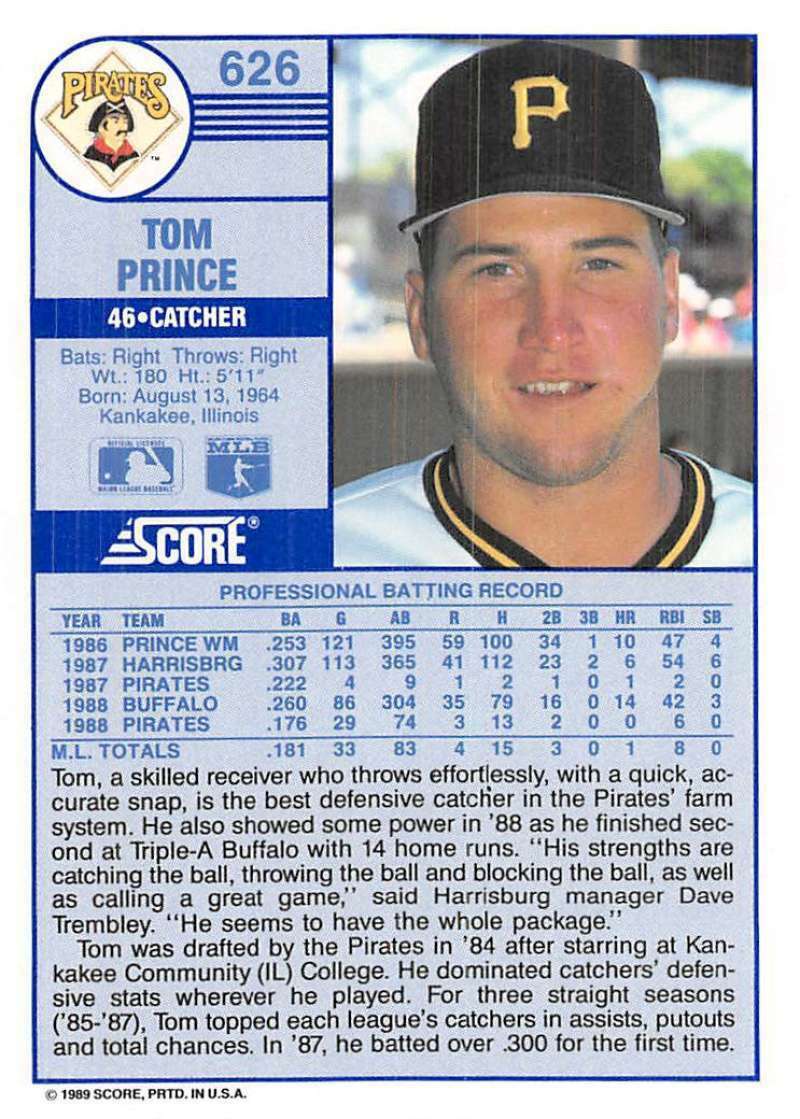 The back of the cards have another color photo of the player, with this one being a mugshot of Prince. As always, the use of the old school team logo is always appreciated. The back didn’t have his complete career stats (they’re missing the 1984-85 seasons), but it has his upper level stats and his two big league stints. As you can see, he didn’t exactly have the most exciting stats in his two brief big league trials, but he was still just 24 years old at the time the cards were printed, and he put up solid stats in the minors, so it seemed like there was a chance that this could be a good rookie card. You also had the scouting report that noted that his defense was the best part of his game, with a quote from his Double-A manager, as well as some defensive stats that showed off his prowess behind the plate. Prince saw his playing time and his batting average drop in each of the next two seasons in the majors. He didn’t have his first solid season until 1993, which ended up being his last year with the Pirates. He played a total of 17 seasons in the majors, but he never played more than 66 games in a season.

You might be interested in this card because Prince spent a long time with the Pirates in various roles, from playing to managing a big league game, and everything in between. It’s also his rookie card, and in my opinion, one of the better poses from this set. So if you are interested, you’ll be happy to know that it’s a cheap common and you’re mostly paying for the shipping if you get it, but we are talking $2 tops. You might find it a little cheaper on Ebay, but between fees and shipping cost, it’s tough for a seller to list it for anything less.