There had to be people who opened packs of 1992 Bowman cards and thought for a minute that they started including front office personnel in packs. If you didn’t know who Steve Cooke was back in 1992, and that wouldn’t be a surprise considering that he had zero big league experience at the time and minor league coverage was hard to find, you would have no clue why he was on a baseball card. He clearly wasn’t a player, was he? If he was, why didn’t they list a team or position or anything except his name? Maybe Bowman started including prospective minor league announcers in their big league sets, helping them attempt to land a job. What other explanation could there be for this card? 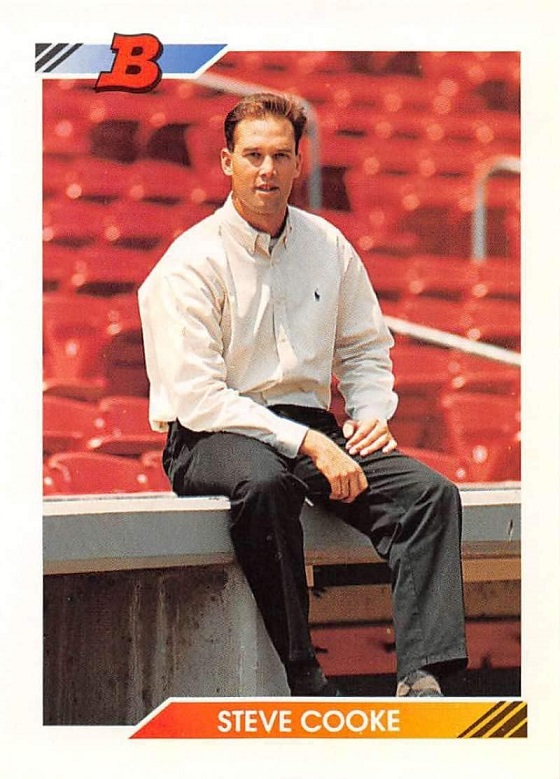 Obviously I’m joking around, but look at this photo and think why did someone think this would make a good card? Don’t overlook his sock game either, which you can make out just enough of at the bottom of the photo. I’m not picking on Cooke here, the set pictured many players in street clothes, including Mariano Rivera’s rookie card, which looks nothing like a baseball card. At least this card has him sitting on the dugout, so you have an idea that it’s probably baseball related. Not all of them had the baseball connection, others were just random outdoor and studio shots. The minor league portion of the set looks like a Sears catalog photo shoot. The lack of a team identifier just makes it even more odd. Just Steve Cooke, who likes polo shirts, his grandpa’s socks and sitting on dugouts.

Here is the back 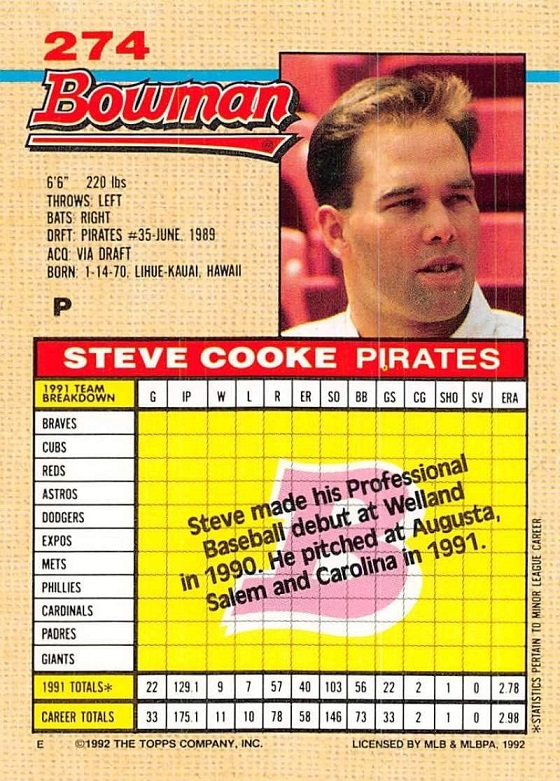 As you can see, the backs had an added photo and it was obviously just a different angle from this same day of photos. The 1992 Bowman cards had a section for pitchers (and hitters) so you could see how they did against certain opponents. That idea worked better before expansion and interleague player than it would now. However, they had a lot of cards of players with no big league experience and didn’t adjust the backs for those players, so a bunch of them have the same setup you see here with a short description of where they have played in the minors so far, followed by their 1991/career minor league stats. I like the back design here, the added photo, the color selection, the opponent-by-opponent stats, but it clearly doesn’t work for the non-MLB players.

If you’re interested in purchasing this card, then that’s a big surprise, but maybe you want one for the story behind it. This IS considered his rookie card, so that’s something I guess. Cooke was a 35th round pick who worked his way to the majors in just three years. That’s impressive. He also spent five seasons in the majors with the Pirates and he made 32 starts for the 1997 Freak Show squad, so most of you reading this do have some memories of him pitching in Pittsburgh. May I suggest that you go for the Pirates team set instead. If you go for the Cooke card alone, you’ll be overpaying for it, though we are talking around $2, not some large sum. The Pirates team set, with 29 cards, can be bought on Ebay right now for $8.25 from someone who has a make offer option, so you can get it a little cheaper if you want. You would get cards of Andy Van Slyke, Jay Bell, Doug Drabek, two cards of Barry Bonds, and of course, the Steve Cooke Sears Catalog rookie.