Today’s Card of the Day is from the 1912 T207 set, also known as the Brown Background set among vintage card collectors. Pictured on the card is a catcher for the Pittsburgh Pirates from the deadball era named William Kelly. The front of his card features a unique uniform in team history and the back of the card tells a great story about how and why Kelly joined the Pirates. 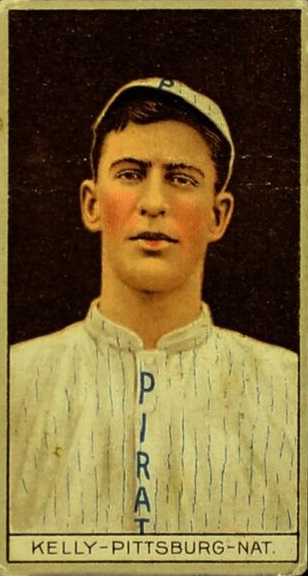 I said this was a unique uniform and it’s also historic. The 1912 uniform shown above was not only used for just one season, it was also the first time that the uniform had the word “Pirates” on it. Team names were just nicknames in the early days of the sport, so when you see someone say that the Pirates became the official name in 1891, not only is the word “official” completely wrong, the team didn’t even embrace the nickname that year. It was just the first year that the name was used by outside sources. It would be the same as if the St Louis Cardinals decided to change their name to Redbirds and then you say that they officially changed their name in 1900 because you can find Redbirds references that old for the team. Don’t drink that Kool-Aid, you’re better than that. Anyway, the 1912 uniform is one of the most important in team history, and the fact that they stopped using it right away adds to the historicness (not a real word).

The T207 set is one of my favorites once you can get around the lack of eye appeal on most cards in the set. Some have great poses that distract you from the color usage. A dark brown background with grey borders doesn’t exactly draw your attention, especially when the cards contain artwork and not actual photos. Some of the artwork serves as a great representation of the player depicted, while others don’t the player justice. Here’s a 1912 photo of Kelly: 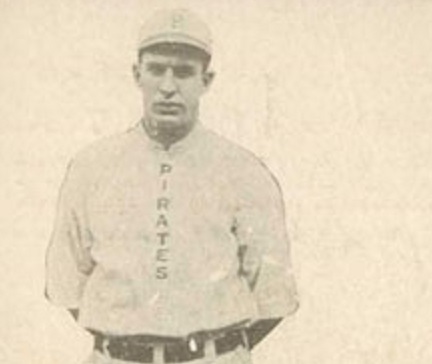 It’s not their best work, but you can see some resemblances in the two photos. That being said, there are some players in the set who are very obscure big league players from that era, there are some extremely rare cards in the set as well, plus the backs of these cards have great bio sections for each player in the set. Those things help make it a semi-popular set from the era.

Speaking of the backs, here’s the one for Kelly: 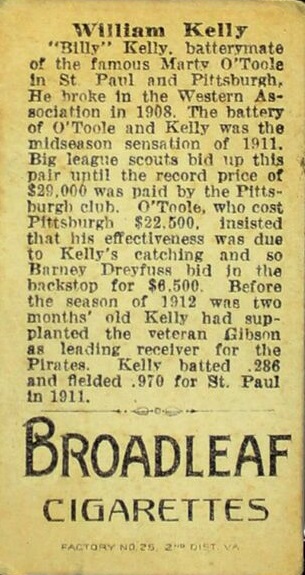 I love this back because it tells a great story of how and why the Pirates acquired him. I recently did research on Marty O’Toole, who was a huge prospect when he joined the Pirates. There was a well-covered bidding war for his services and Pirates owner Barney Dreyfuss not only got his man, he took his catcher as well. Kelly wasn’t a slouch though, teams were bidding for his services at the same time, he just wasn’t in the same category as O’Toole at the time. The card also notes that Kelly had become the first-string starter for the Pirates behind the plate in 1912, which gives you a great idea of when this card was printed. Kelly took over on May 10th, and by June 27th he lost that role. He injured a finger on June 27th and he was replaced by George Gibson. Kelly was out for three weeks, but once he returned, he saw sporadic playing time.

These cards were issued with cigarettes back in the day, which is the advertisement shown at the bottom. Broadleaf was one of the more popular brands back then. Kelly cards can also be found with Cycle brand backs and the anonymous backs, which just means that they didn’t have the ad at the bottom. The Cycle back has red printing for everything on the back and is usually referred to as a Red Cycle back, but the brand name is Cycle and red is just the ink color.

These cards are both tough to find and expensive. At the time of this write-up, there were four Kelly cards on Ebay and the cheapest one is $300, while the asking price on the only Red Cycle one is $999. One Kelly card was purchased over the last three months on Ebay and the price was “only” $110, but it was also in very poor condition. Basically, if you want one and money IS an object, then you’re going to have to settle for a card that looks like it was on the losing end of a bar fight in 1912, and things got worse from that point on.