Today’s the 70th birthday of Pittsburgh Pirates third baseman Bill Madlock, so it’s a good time to feature him here for the first time in a solo article. It’s actually past due, but we did have him here on a 1984 Topps batting leaders card with Pete Rose and Dave Parker, so Madlock hasn’t completely been forgotten in this series. He gets his own article today and it’s his 1984 Donruss Diamond Kings, card #20 in the set. 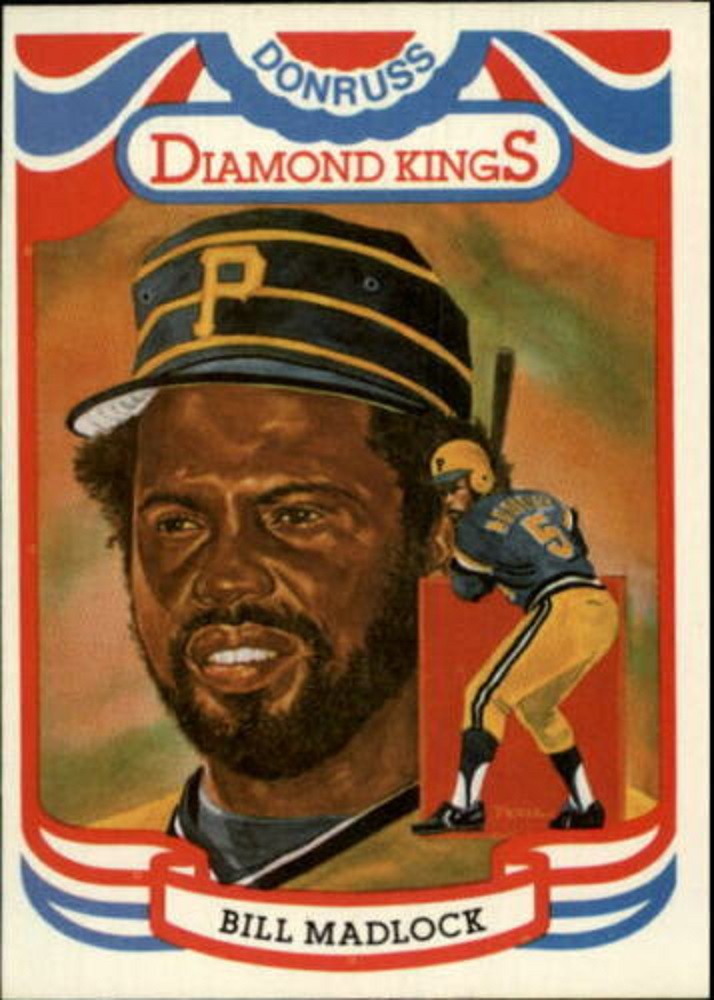 The Diamond Kings cards were included at the beginning of early Donruss sets, starting back in 1982. They were special artwork cards by artist Dick Perez from the Perez-Steele Galleries. Teams had one player each year in the set. The Pirates were represented by Dave Parker in 1982, Willie Stargell in 1983 and Tony Pena in 1985. In fact, we covered the Pena Diamond King card here way back in July and I mentioned that Madlock’s card (as well as the others) would likely be a future subject in this series.

Each card in this series over the years had a similar layout. There would be a portrait of the player and a smaller action shot. Madlock is shown here in a batting pose, with his familiar #5 visible. He was wearing the gold bottoms and black tops from that era. In the portrait shot, he’s wearing the gold top and the “makes everything look better” black pillbox cap. The background of the cards each had unique designs, so no two from any year really looked alike. 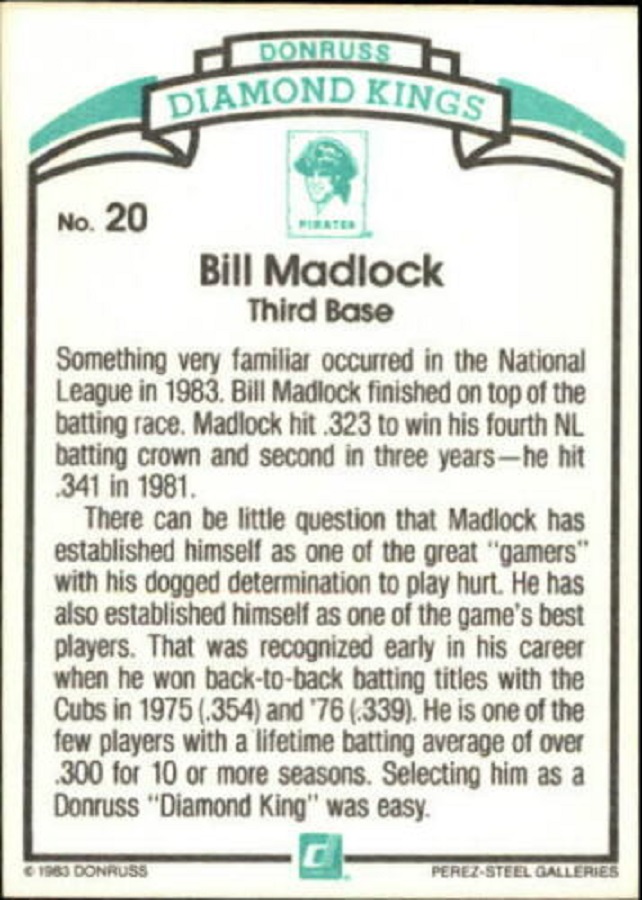 The backs of every card basically tell you why they chose that specific player for the exclusive Diamond King club. Madlock was a great hitter for average during his career and it paid off in the form of four batting titles. Two of those titles came with the Pirates, one in 1981 and one in 1983, which is how he got into this Donruss subset. They also called him a gamer for playing hurt during his career. Then there’s a random stat that isn’t true. They said that he’s one of a few players with a lifetime average over .300 for ten or more seasons. If it said active players, then you could loosely call that group “a few”, but it doesn’t say active. so it’s not even close to being true. By my count in 1983, there were 155 players all-time with a .300+ average and at least ten seasons. Donruss made up for that lazy research by noting that Madlock was an easy choice to be represented in the set. He would have also been a good choice in 1982 or 1983, but you can’t blame them for their choices those years.

This card was originally issued with an error that was quickly corrected, as were all of the Diamond King cards that year. At the bottom in the right-hand corner, it says “Perez-Steel Galleries” in small capital letters. As mentioned up top, it was the Perez-Steele Galleries, and that E at the end of Steele was quickly added. While the errors are harder to find, you would need a real master collector of the set to truly appreciate having both examples of every Diamond King card as part of their set. Therefore there’s no significant value added by the mistake/correction. The 1984 Donruss set wasn’t printed in large quantities, so the set already had a little more value than your average cards from the 1980s. You also see in the left-hand corner that Donruss labeled these are being printed in 1983, but it’s the 1984 set. That was not a mistake, they actually began printing the cards in late 1983.

These cards can be found cheap and they are each individual pieces of artwork. You can get the Madlock for $2 delivered and there are multiple choices on Ebay. You can also find some autographed examples and even a handful of graded copies exist.