You’ve likely already read our bio on Pittsburgh Pirates Hall of Fame outfielder Max Carey, which was posted this morning in our This Date in Pittsburgh Pirates History article. We also posted an article this morning detailing his impressive 1922 season. Carey was born 131 years ago today (January 11, 1890) and he spent 17 seasons with the Pirates. He’s one of the top players in team history, making him an excellent choice for a three-article tribute on his birthday. So we added an extra article today on the history side, and this one looks at his baseball card from the very popular 1915 Cracker Jack set. 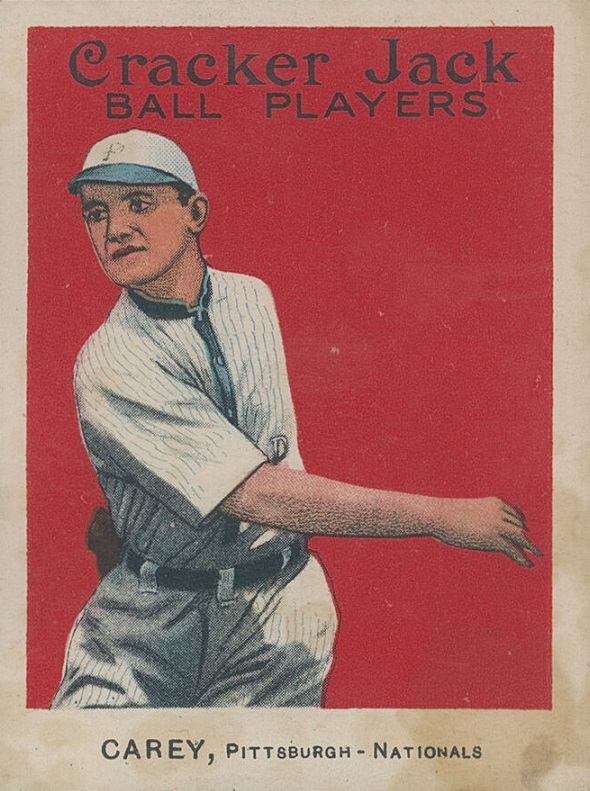 Let me start by saying that Carey isn’t the best first representative for this set in our Card of the Day feature. His artwork isn’t their best effort in the set. This one is more cartoonish than a representation of Max Carey. Here’s the actual photo that this card is based off of, which was used in a 1916 baseball card set: 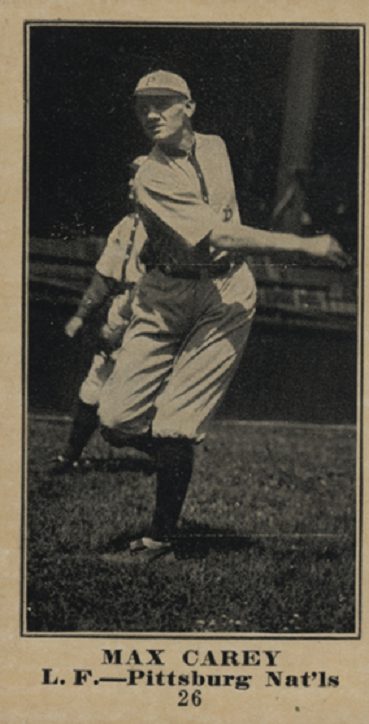 They did a good job of getting the likeness of the pose, which was actually an action shot and not posed for the camera. They really missed on the face though. Even if you don’t recognize Carey based on pictures alone, a comparison between those two shows the differences.

Anyway, enough of taking jabs at artwork for 106 years ago. The 1915 Cracker Jack set is extremely popular due to the players included, some of the greatest to ever play the game, as well as the eye-catching front design, with the bright red, solid background drawing in collectors.  All of the cards have “Cracker Jack/ BALL PLAYERS” up top on front and the player’s name/city/league on the bottom. This set also included the Pittsburgh players in the Federal League that year, so that “NATIONALS” designation at the bottom was necessary to tell the teams apart, especially since team nicknames weren’t official back then. 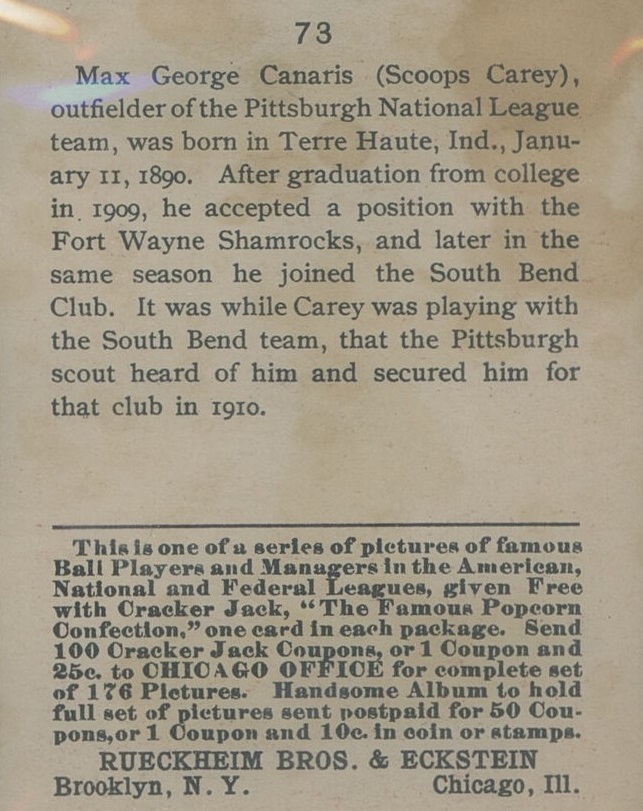 The back has a nice little bio section and a huge advertisement for Cracker Jack, the famous popcorn confection. The back ad is more interesting in this case because look at the price it costs you to get the entire set! It’s true that they were giving the cards away for free in packs, which helped with sales, but you could get all of the cards for just one coupon and 25 cents. You can’t even get a 1988 Topps common for 25 cents in the mail because of the price of a stamp. For people with more money to throw around, you could get a handsome album to hold all of your new cards and you could pay them in either coins or stamps. While it’s hard to believe they could make any money off of the baseball cards, just remember that these served as constant reminders of Cracker Jack, the famous popcorn confection, and they were being put in the sticky hands of young kids everywhere.

If you’re interested in this card, but have no idea about price, let me apologize now for featuring the card. You will not find one cheap, at least not in good condition. If you’re unfamiliar with this set, then I’d suggest going for a graded example, because there are reprints out there. This particular scan I pulled from Ebay came from a PSA 2 copy that had a $550 asking price. A slightly worse one that was ungraded, recently sold for $249. I collect old cards, but never got into this set. I have one Cracker Jack card, and you might be able to guess that it is Dots Miller. I would not get the Carey if I wanted to get another because I’m not enthralled with the artwork, and for the same price, I can get a better looking card (my opinion) from a different set in better condition (I’d rather have the one in the other scan from the M101 set). That being said, this is a very rare and popular card and highly collectible.