Today’s Card of the Day features a player who had three stints with the Pittsburgh Pirates during his Hall of Fame card. Burleigh Grimes was a member of the Pirates during the 1916-17 seasons, then returned for the 1928-29 seasons, before coming back at the end of his career during the 1934 season. He started and ended his career in Pittsburgh, while also spending two years at his peak with the team. He was part of a big trade on this date in 1918 involving the Pirates and Brooklyn Robins. It was a deal that also involved Hall of Famer Casey Stengel, who was an outfielder at the time. There aren’t many card options available for Grimes while he was in Pittsburgh. He was barely used during his first two seasons, and his final stint was a short one. There weren’t many cards being produced during his second stint, but the W554 set managed to get a great shot of him in a Pirates uniform and include in a set that had just 18 players in it. 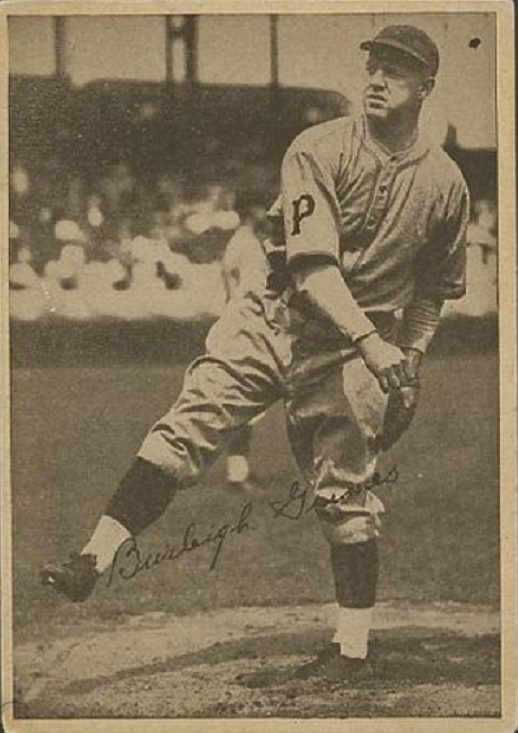 The 1928 and 1929 Pirates uniforms were identical. Obviously you can’t tell the colors by the black & white photo, but the team wore white jerseys at home with blue and red mixed throughout. The “P” on the sleeve was dark blue, as was the cap and the stirrups. The stirrups also had red stripes, while the “P” on the cap was red. On the road, the jerseys had a similar look, except they were gray and the undershirt was a light blue. This photo was probably taken in 1928 because this exact same picture was used in the 1929 Kashin set. While there are some small differences between the Kashin and W554 Grimes cards, the biggest one is size. The Kashin measures 3-1/2” by 4-1/2”, while the W554 comes in at 5″ by 7″. By the way, Grimes won 25 games for the Pirates during the 1928 season.

As mentioned above, the back of this particular card is blank, but not all of the cards from this set were blank. Some came with advertisements, either printed or stamped, showing various companies that usually appealed to young kids. The “W” in the set name just tells you that these are classified as strip cards (aka cards that came in strips), although they aren’t really strip cards, they just didn’t fit into the other categories. The “554” is nothing more than a catalog number that was next in line back when they decided to sort out all of the sets. You’ll notice that the front has a facsimile autograph, which can be found on all of the cards. However, some cards were made with printing on the front, located in the bottom border. The Grimes cards with printing read: “BURLEIGH GRIMES-Pitcher-PITTSBURGH PIRATES”.

If you want this card, you really have the two choices, because you could also settle for the smaller Kashin card. You’ll be paying for the scarcity more so than the fact that the cards feature a Hall of Fame pitcher. They aren’t expensive though, unless it has the advertising on the back, then that adds to the value. Right now on Ebay there are two W554 cards available. One has the name printed at the bottom and it’s selling for $100. The other has no name and it’s listed for $150 with a best offer option. You would probably be better off waiting for an actual auction and not ones with buy it now prices. That’s because the nameless one sold for $24.45 in an auction not that long ago. It wasn’t as nice as the other two for sale now, but it was bad either. Someone stuck it up somewhere with pins, so the pinholes cut the value. They didn’t really affect the great shot of Grimes though, so in my opinion, it was a great purchase for someone. There’s one Kashin…maybe. Someone has an auction with the title saying it’s a 1929 Kashin Grimes, but the photos are clearly a different card from the set. That’s only $65, so it might be a good value if you can confirm that it’s actually Grimes being sold.