Today’s Card of the Day features an All-Star catcher who spent a very short time with the Pittsburgh Pirates during a very long career in the National League. Walker Cooper was with the Pirates at just the right time to be included in the small, regionally issued, 1954 Dan-Dee Potato Chips set. Cooper, who was an eight-time All-Star, is featured here today on the 115th anniversary of his birth. The Dan-Dee set is a popular one for advanced collectors to try to piece together and Cooper’s card is one of the more popular ones in the set. 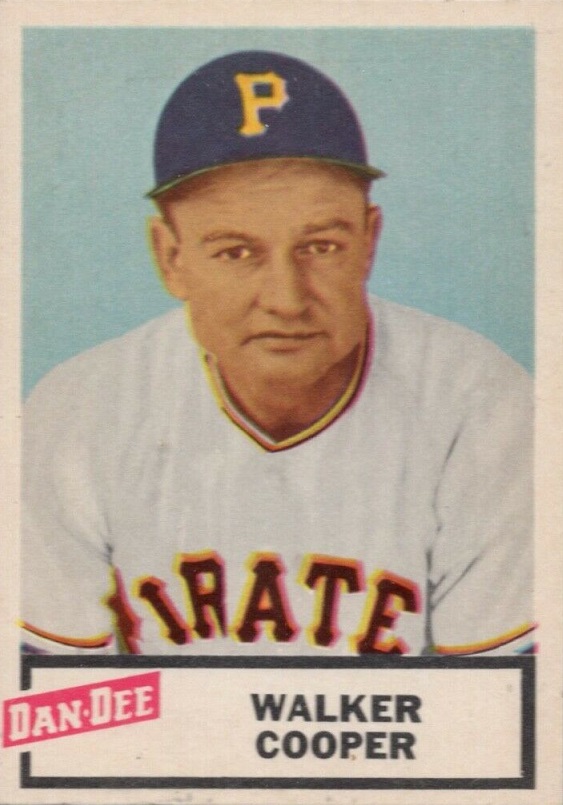 The Dan-Dee set consists of 29 cards and all of them are fairly rare, but Cooper is one of two cards in the set that were short-printed, making him, along with Pirates teammate Paul Smith, tougher cards to find than the rest. They came in bags of potato chips, which makes them tough cards to find in decent condition. Imagine eating potato chips while looking at your new card with those greasy hands decreasing the future value of the card every time you touch it. Plenty of people did just that.  This set has a simple design with no bells and whistles. There’s a photo, the player’s name in a box at the bottom in black and white print, and a small company logo for Dan-Dee. No player position, no team name, no fancy colors, just the essentials here. 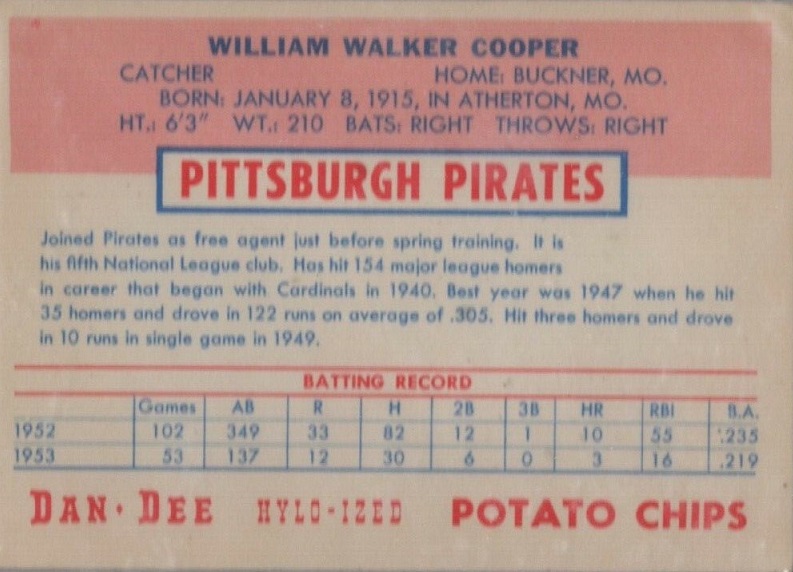 The back has a simple looking, using red, white and blue colors. It is typical of a card from the era, with the added advertising for Dan-Dee Potato Chips at the bottom. It’s interesting to see that they included two years of stats, but didn’t put the career totals. They let you know in the little bio section that he debuted in the majors in 1940, and also that his best season occurred during the 1947 season, while his best game happened in 1949 when he homered three times and drove in ten runs. Cooper played for the Milwaukee Braves in 1953, then got released in February. He signed quickly with Pittsburgh and spent a total of 3 1/2 months as a member of the Pirates. With most of that time being Spring Training, he played just 14 games with Pittsburgh before moving on to the Chicago Cubs as a waiver pickup. Cooper basically toured the NL during his 18-year career, playing for six of the eight teams during that time, including two cities while with the Braves (Boston and Milwaukee). The fact that he spent about 100 days total with the Pirates makes it perfect timing on the printing side of things that he ended up being pictured with the team. The set was issued in the Pennsylvania/Ohio area, so he may not have even been included if he was still in Milwaukee or made it to Chicago already.

This card isn’t easy to find and it’s expensive when you do find one for sale. The fact that it is short-printed heavily affects the price, with set collectors willing to pay a higher price to complete their collection. There are currently five on Ebay, with a PSA 4 going for $470, and PSA 8 priced at $3,825 (with a best offer option!). Then there’s one that looks like someone put it in their pants pocket and washed it in the laundry. It care more about owning the card than owning one in a certain condition, then the price is just $56.