Today’s Card of the Day features the man who had the unenviable task of filling in for the National League MVP right in the middle of the 1960 pennant race. When Dick Groat went down with an injury in early September, Dick Schofield stepped in at shortstop and hit .403 in 21 games, helping keep the Pirates in first place, on their way to their third World Series title. Before the next season, Topps released the first series of their 1961 set.  They would go on to release a total of seven season throughout the year, with card #453 of Dick “Ducky” Schofield included in the later sixth series. Schofield turns 86 years old today. 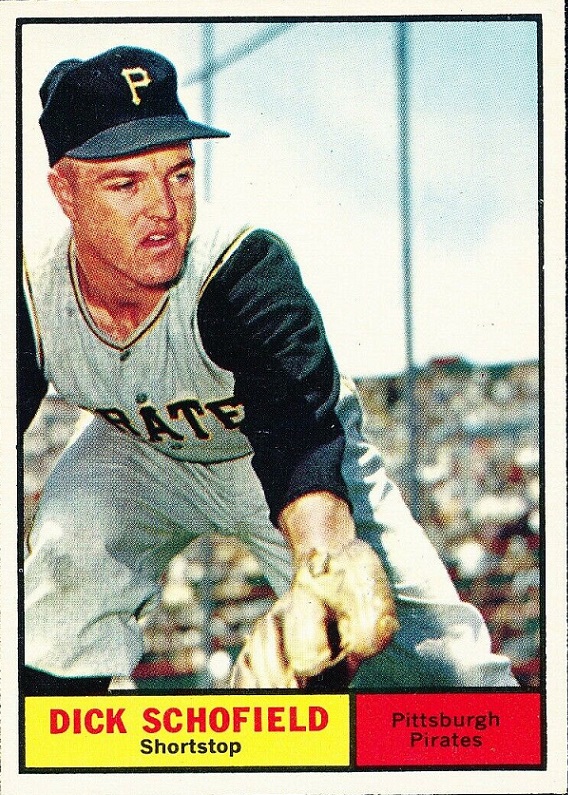 You might be thinking that obviously John is going to choose the 1961 Topps Dick Schofield to highlight today, being it’s the man’s birthday and this card features him after his great performance in September of 1960. That was just a happy coincidence. I entered a search for his cards and this pose stood out, then I wrote the article around the card choice. It’s the best pose (in my opinion) available for Schofield on a card from his time with the Pirates. I was actually looking for something besides a regular Topps series card, maybe a regional issue, but I was drawn to the pose here, plus the bold yellow and red at the bottom was eye-catching. 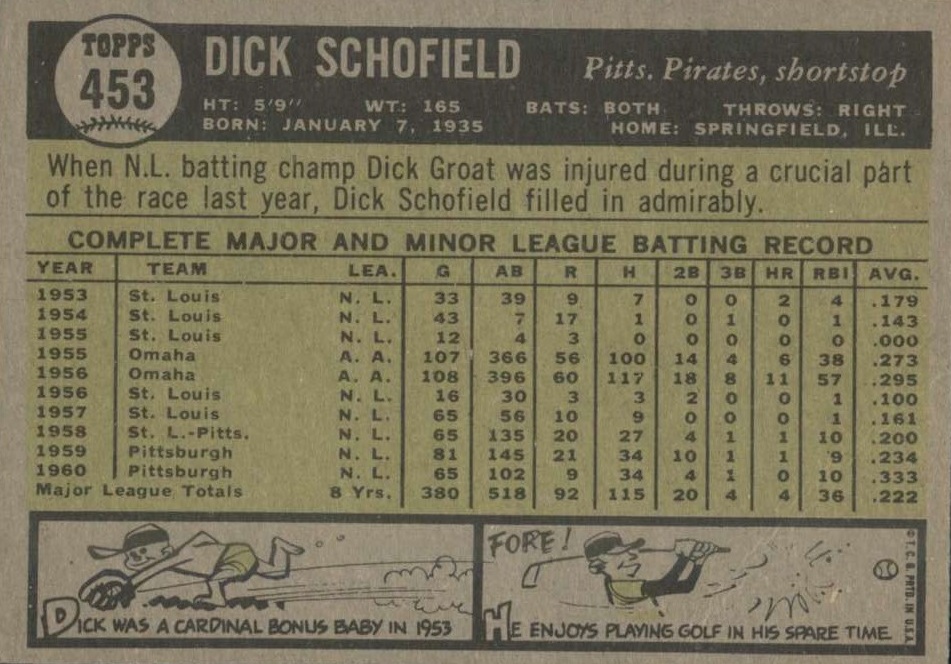 The back starts with the bio at the top, noting the performance by Schofield while filling in for Dick Groat. It’s interesting to note that they called Groat the NL batting champion, only because it seems like you would mention that he was the Most Valuable Player in the NL. You might think timing had something to do with that, but the award was handed out on November 17th. With this card being a sixth series card, it was printed long after Groat was named MVP.

I like that this card includes his minor league stats and those are his complete stats. As the cartoon at the bottom notes, Schofield was a signing under the “Bonus Baby” rule, which basically meant that his bonus was over an amount set by MLB, which kicked in the Bonus Baby rule and the St Louis Cardinals had to keep him in the majors for two full seasons before he could be sent to the minors. The rule was put in place to keep the rich teams from buying up all of the best unsigned amateur talent. So Schofield went right to the majors, then began his minor league career in 1955. The back of the card also lets us know that he enjoys playing golf, but he doesn’t know that you use a golf ball and put it on a tee. Hitting a pitched baseball with a golf club isn’t golf, it’s bolf.

If you’re now interested in adding this card to your growing Pittsburgh Pirates collection, then you’ll be happy to know that it’s both easy to find and fairly cheap for a 60-year-old item, especially considering that the sixth series cards are tougher to find than the early series cards. The average price for a mid-grade Schofield (ungraded) on Ebay is about $6 delivered. Nicer ones will go for a little more and if you’re patient or you don’t mind low grade, then you can get it a little cheaper. A few graded ones in high grade (PSA 9) have ended recently and they go for about $60. Those are not only in excellent protection, they are also in extremely nice condition. Some cards wouldn’t have even graded PSA 9 out of the pack.