Today’s Card of the Day features three prospects from the 1980 Pittsburgh Pirates, and one of them is celebrating a birthday today. During the 1979 season, the Pirates called up three prospects during the year, 23-year-old outfielder Alberto Lois, 30-year-old catcher Harry Saferight and 24-year-old first baseman Doe Boyland. After the Pirates won the World Series, Topps decided to feature those three players in their 1980 set in a subset called “Future Stars”, which had three players from each big league club. This card below is #683 in the set and together those three players were designated as Pirates Future Stars. 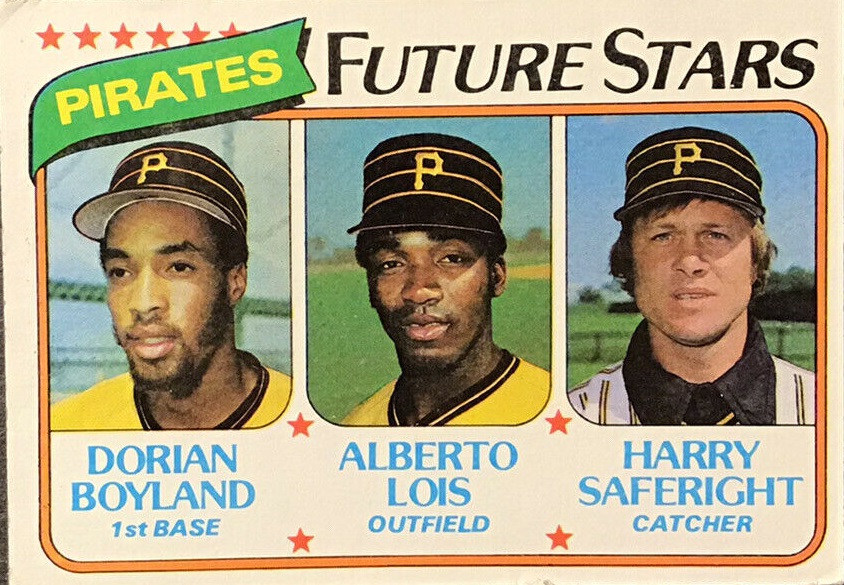 The front of the Future Stars cards featured the head shots of three players, with the name and position below. Boyland, who turns 66 today, and Lois are shown wearing the gold jerseys, while Saferight got the white pinstripe jersey. All three photos were taken during Spring Training, which you can see by the background for each player. We can’t tell if the photos were all taken in 1979, but due to the timing of the release for the 1980 Topps set, we know that they were taken before all three of these players became World Series champs. More importantly, all three players are wearing the black pillbox caps, making this the best card in the set, regardless of the players involved. 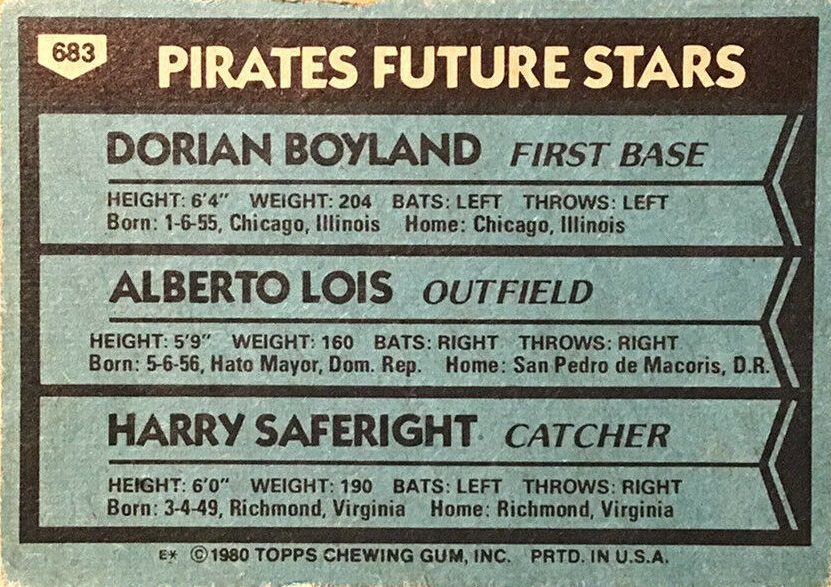 If you know your Pirates history, then you know that these players provided very little as far as big league time. Boyland spent parts of three seasons in the majors with the Pirates, though he never started a single game. In fact, he played just one game in the field during those three years. In 1979, he pinch-ran once and pinch-hit three times. This wasn’t a bad choice though for a prospect. Boyland was a solid minor league player in the upper levels, who never got a real shot in the majors. He was still young at the time and had Triple-A success, so you can’t fault Topps for including him here.

Lois wasn’t a bad choice either. He had brief big league time in 1978, then he was used as a pinch-runner exclusively for the 1979 Pirates, getting into 11 games. He was young and had some solid minor league stats, though he was slowed by injuries over the years. Unfortunately we will never know if this was a good choice or not by Topps because around the same time these cards were being printed, Lois was in a car accident that ended his pro career. He survived the crash and lived until March of 2019, but an eye injury made it impossible to play baseball.

Saferight was a bad choice because he was already 30 years old at the time and you won’t find many players that old in baseball history who were future stars. Saferight was drafted five times and never played a big league game. He collected big league checks though.  The Pirates called him up on September 1, 1979 and he was still there on September 30th when the season ended. He received a $250 bonus after the season as part of his World Series share, the same amount received by Lois and Boyland. On January 3, 1980, the Pirates traded him to the Atlanta Braves.

If you’re interested in this card, and who wouldn’t be, you can get it for $2 on Ebay delivered and there are a few options available in that price range. Just over a month ago, someone sold one signed by Saferight and Boyland for $6.25…I may have tried to buy that if I knew about it.