Today is the 93rd birthday of former Pittsburgh Pirates catcher Bob Oldis, who spent the 1960-61 seasons with the team. He was the third-string catcher for the 1960 World Series champs, helping defeat the New York Yankees, who had Oldis in their minor league system during the 1957-59 seasons. So today we look at the first Topps card featuring Oldis as a member of the Pirates. This is his 1960 Topps, card #361. 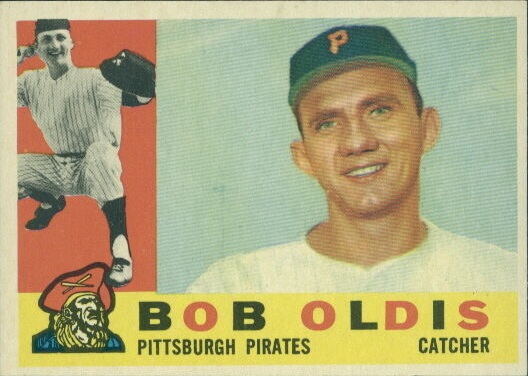 I’m a big fan of the 1960 Topps fronts. I like the two-photo fronts, especially when they are different poses, such as this example. I like the coloring, the lettering and you should know by now that I really like the old school Pirates logo, especially a nice big example like that on the front. The Oldis card isn’t one of the better Pirates for eye appeal in the set. The main photo obviously isn’t a photo, rather some artwork done to show him with the Pirates. The other picture is a photo, but it shows him while he was catching for the Washington Senators at least five years earlier, making it a fairly old photo for a new card. I like the pose though, just figured if they were doing some artwork anyway, why not airbrush the other photo too. Where do I go to make 61-year-old complaints? 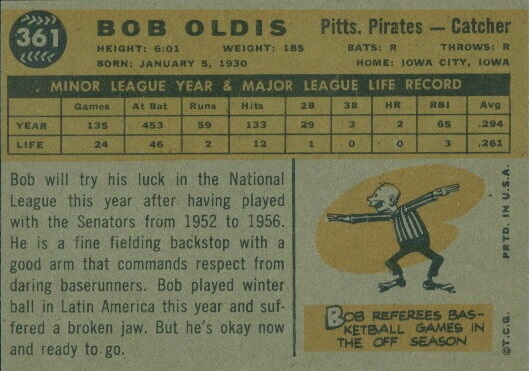 The back mentions that Oldis played for the Washington Senators from 1952 until 1956, but he actually only played for them during the 1953-55 seasons. He was in their organization during the 1952 and 1956 seasons, but he was also there during the 1949-51 seasons, so whether they were talking about the minors or majors, there was a mistake made there…though you could say that it’s still technically true in the same sense that Willie Stargell played for the 1972-78 Pirates, just no one would write it that way on the back of a card.

The back had two other facts, one I knew and one I didn’t. I knew he was a basketball referee in the off-season because that’s something he did for a long time during his life. I did not know that he broke his jaw in the winter. He was in the Dominican and it was reported in the local papers on January 5th, noting that he would be ready to play within 45 days. That tells you a little something about the timing of the printing on this card. I’m assuming that they weren’t assuming when they said that “he’s okay now and ready to go”. If he needed 45 days before he was back, then this card had to be printed after mid-February. Topps printed 1960 cards in seven separate series. This particular offering was part of the fourth series (cards #287-#374).

If you want to get this card, it’s fairly cheap on Ebay. As of the writing of this article, 32 examples of this card have been sold over the last three months. Four of them went for over $9, all of them high grade examples. The other 28 ended anywhere from $1.99 to $9.00, with the $9 one being an autographed card. Not only that, there are over 100 live auctions for them right now (123 to be exact), with high grade options, a few autographed ones and nearly 100 auctions for $10 or less. My personal opinion, pick a nice mid-grade/ungraded one for about $7 and you won’t regret the purchase.