Today’s Card of the Day is another one where the term “card” sort of works, though it’s clearly not a baseball card in the tradition sense. It’s also not something that a company would do in the current day, especially with kids being the majority of card collectors. Gus Suhr is one of the under-appreciated players in Pittsburgh Pirates history. He was a solid hitter in their lineup nearly every day for ten seasons from 1930-39. He was born on this date in 1906 and lived out a full life until 2004. He’s featured here on a set from 1934 called Diamond Matchbooks.

Here’s the front, which also includes the back (at the top) when it’s opened:

These can be found in blue (shown here), red, green or orange. From an internet search for Suhr, blue and red are much easier to find. When folded out like show above, they measure approximately 1-1/2 x 4-1/8. There are 200 “cards” in the set, not including the color variations. If you went for all of those, you would be able to keep yourself busy for quite a while. I mentioned that the term “cards” sort of works here and that’s because you’ll find them in card collections, along with being listed in card price guides and sold on Ebay under the category of cards. Clearly it’s not a card, but there are some sets that break the traditional rules.

Each matchbook features a black and white head shot similar to what you see here for Suhr. These were quite literally matchbooks. If you flipped it over, the reverse is blank cardboard, and some of these can be found with the matches still inside, though that it rare compared to the used ones without matches.

Here’s a better photo of the back section, flipped for easier reading: 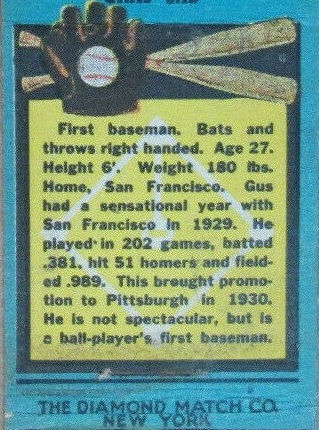 As you can see on the back, they have a short bio for the players, looking at the height/weight/age etc, along with how he got to the Pirates. Suhr played four full seasons for San Francisco, plus a few games in 1925. He really broke out in 1929 and that led to him taking over the Pirates full-time first base job in 1930. He had a pretty big season in 1934 when these matchbooks were released, hitting .283 with 62 extra-base hits and 103 RBIs. His best year came in 1936 when he set career highs with a .312 average, 118 RBIs, 111 runs scored and 95 walks. As the back of this card says, he wasn’t a spectacular player, but he was a ball-player’s first baseman. Suhr put up 23 WAR in 11 seasons, which was basically 9 1/2 years because he missed half of one season and only played ten games in his final year. Those aren’t superstar numbers, but you would take a team full of 2.5 WAR players who were in the lineup every day.

These matchbook items are neat collectibles and they can be bought very cheap considering their age. They aren’t highly sought after, which keeps the price down. I personally own just two of these and one is a player from my hometown of Kearny, who doesn’t have many other items available. My other one is Rip Sewell, the great Pirates pitcher. You can find Suhr in nice shape for about $15, some even a little cheaper if you aren’t a stickler about condition. There are some proof versions that cost a little more, but those are for advanced collectors.