Today’s Card of the Day features two Pittsburgh Pirates legends, manager Danny Murtaugh and center fielder Bill Virdon. Murtaugh managed the Pirates to two World Series titles and also played for the team during the 1948-51 seasons. Virdon was the opposite, making his mark with the team as a player from 1956 until 1965, with a brief return in 1968. He was also a coach for the Pirates, as well as a manager during the 1972-73 seasons. Both of them are pictured here on a 1964 Topps card titled “BILL’S GOT IT”. 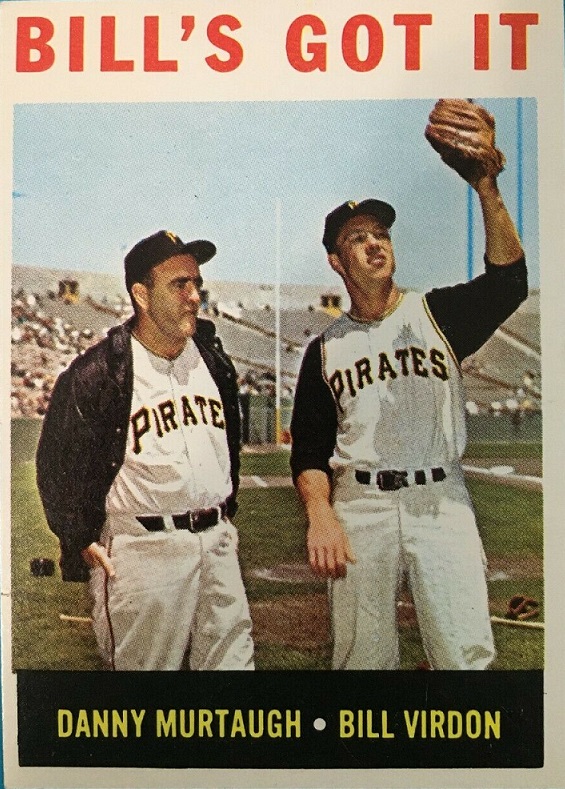 This is a great card for Pirates fans because of the two players featured on the front, but it’s quite the odd looking pose. Clearly it’s a staged photo in foul grounds. Virdon is looking up with his glove possibly shading his eyes and he waits for an imaginary fly ball to come down. That’s not an uncommon pose from that era, all of the shots at this time were staged. However, Murtaugh is standing next to him, showing zero interest in the imaginary sphere hurtling towards the Earth. Is it possible that the lack of interest comes from Virdon being so sure-handed that Murtaugh need not worry about whether or not he makes the play? That’s a possible explanation. He could have already moved on to contemplating about whether he should pinch-hit for Bob Friend to lead-off the bottom of the imaginary inning. 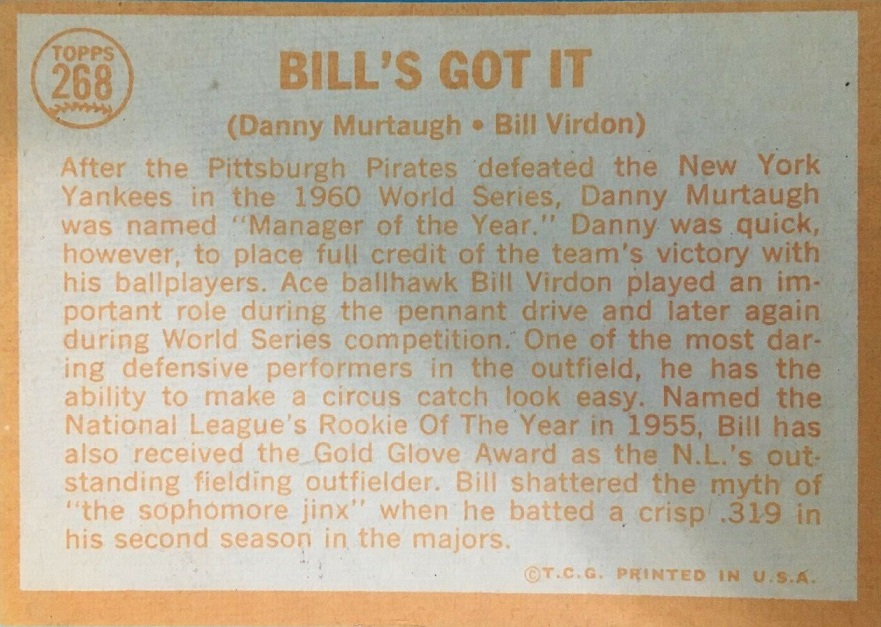 The back has a nice story about why Topps decided to features these two on one card together. When the Pirates one the World Series in 1960 and Murtaugh was named Manager of the Year, he pushed the focus off of him and onto the players, as any good manager would do. Virdon was one of those key players and his defense is what stood out. As mentioned there, Virdon was a Gold Glove center fielder. That honor was bestowed upon him in 1962. However, his best years on defense came in 1957 through 1960, during the first four years of the award. Virdon had a total of 4.3 dWAR during those seasons according to modern metrics. His career mark was 4.1, so you can do the math there to see that the other eight seasons combined came out to -0.2 dWAR. Virdon led NL center fielders in fielding percentage three times, range twice and assists once.

As it turned out, the 1964 season wasn’t great for either of them. Virdon saw a drop in both offense and defense, while Murtaugh led the team to an 80-82 finish. This card celebrates their great accomplishments before that season, and then both of them had some great times with the club after the 1964 season.

If you’re interested in purchasing this card, you can get a nice example fairly cheap. The crazy thing about Ebay and shipping rates is that a common card from 1987 Topps, which were massively overproduced, costs you about $2 because of shipping and seller fees. This card can be purchased for that same price, even though it’s more than 10x as difficult to find and it’s obviously more collectible because Virdon and Murtaugh aren’t commons. The difference being that a 1987 Topps might have 50 sellers willing to ship it to you for $2 total, while you have about 4-5 choices here at that price range and the corners might have a little bit more wear and tear (maybe not tear). A PSA 7.5 of this Virdon/Murtaugh recently solid for $17 delivered and that’s a high grade card with a protective case. Basically, if you want this card, it’s great for someone on a tight budget and someone who wants a high grade example because it’s very affordable either way.