Today’s Card of the Day features the Great One on the 48th anniversary of his tragic passing. Instead of dwelling on the tragedy, I decided to bring it back to happier times when the Pittsburgh Pirates Roberto Clemente took the National League batting crown, finishing ahead of two other all-time greats, Hank Aaron and Willie Mays. This was Clemente’s third batting crown out of the four he won during his career. He won his first in 1961, then batted .339 in 1964, followed by his league best .329 average in 1965. He won with the fourth one two years later. The card is #215 in the 1966 Topps set, titled “1965 BATTING LEADERS” and it features, Clemente, Aaron and Mays on the same card. 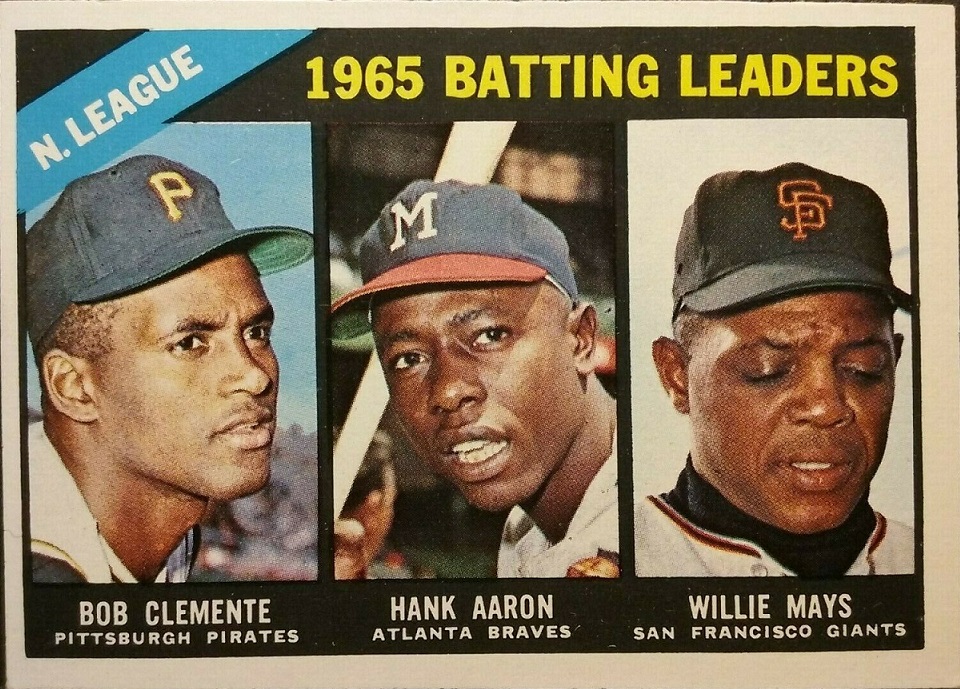 As you can see, the league leaders cards gave you a photo of three players, and in this case it just happens to be three of the best outfielders of all-time, including two of baseball’s top home run hitters ever. If you collect Clemente cards, you may have noticed that this particular photo that they used here is a cropped version of his 1963 Topps regular card. An interesting note with Aaron here is that he’s clearly wearing a Milwaukee Braves hat, but it has Atlanta Braves in the caption. Technically he finished second in the NL batting race with the Milwaukee Braves in 1965, but the team moved to Atlanta the following season. Topps was able to update the team name, though no photo was obviously available. The Mays photo here was used the year prior on the NL home run leaders card. 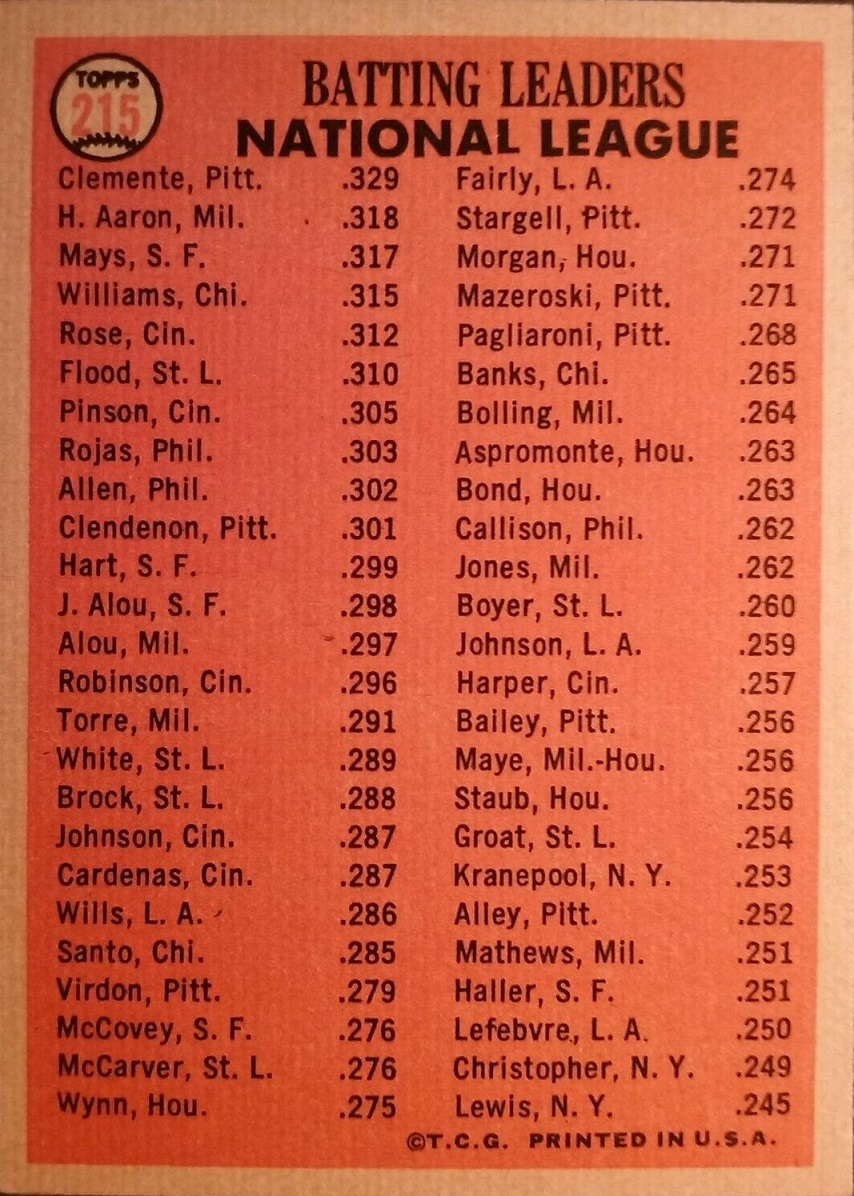 I love the back of these leader cards because they give you so much information. These are the top 50 qualified batting leaders from 1965, back when they had ten teams in each league. With 50 players, every team should average five players on the back here. The good teams will obviously have more, the bad teams will have fewer players. By that standard, we see Clemente in the lead with a .329 average, followed by fellow Pirates teammate Donn Clendenon rounding out the top ten with a .301 average. Bill Virdon ranked 22nd with a .279 average, Willie Stargell is 27th, Bill Mazeroski is 29th, Jim Pagliaroni is 30th, then Bob Bailey and Gene Alley round out the bottom third. Basically, the Pirates got their whole starting lineup (minus the pitcher of course) in there with eight batters. Manny Mota had the most plate appearances among Pirates who didn’t qualify for league leaders that year. He hit .279 in 324 plate appearances.

If you’re interested in this card, there are various options as far as condition and how much you want to spend. If you just want one and don’t care about the shape, you can actually pick one up for $10-$15 in low grade. You can’t beat that price for a 54-year-old (55 tomorrow) card with three all-time greats in their prime. If you want one that looks a bit nicer, it will run you about $35 ungraded for Excellent condition (equal to a PSA 5). That’s a bargain because one that is graded PSA 5 will cost you about $100. Once you get up to a PSA 7, then the price is $200 and nicer ones, if you can find them, will jump in price. The average price of a PSA 9 is $1,500 and they are obviously hard to find in that shape. There are two that have been graded PSA 10 (Gem Mint) and those will sell for five-figure prices if either comes up for sale.