Today’s Card of the Day is a bit of a stretch for a “card” article at first (and second) glance, but it actually works. It’s a 1914 B18 Felt Blanket,  featuring Pittsburgh Pirates infielder Jim Viox. Felt Blanket wasn’t a company that put out cards in the early part of the 20th century, rather it describes the actual product, which was released with various tobacco brands products in 1914.

Here is the “card”, both versions. Red first: 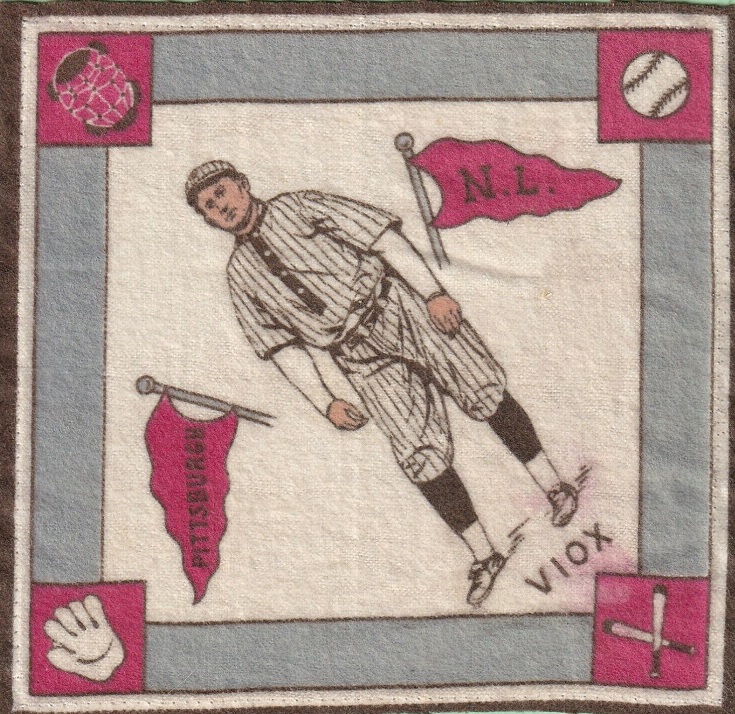 Here’s the purple one: 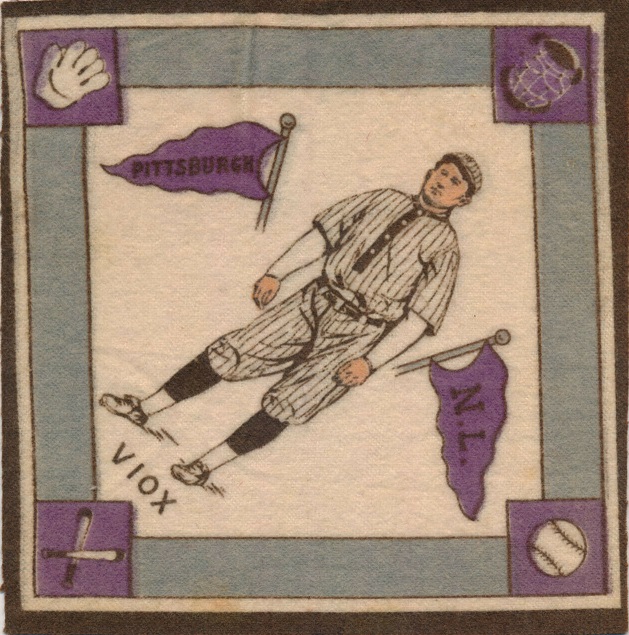 The name Felt Blanket comes from the feel of the fabric used for the “card” and the fact that many people back then sewed them together to make them into a blanket. The “B18” part is just the catalog number, which was created at a much later date. Each Felt Blanket measures 5 1/4 square inches. They feature a total of 90 players representing ten teams. Jim Viox was the starting second baseman for the Pirates during the 1913-14 seasons when these “cards” were released, playing nearly every game, while contributing enough during those years that he finished 13th in the MVP voting each season.

I use the term “card” loosely here, while mentioning that it actually works. Clearly these aren’t typical cards, but they are grouped together with cards in pre-WWII price guides, as well as their listing category on Ebay in case you’re interested in picking one up (more on that shortly). So while this clearly isn’t a card, no one who collects old cards is going to correct you if you consider these part of your card collection.

As for the Viox Felt Blanket itself, he has a red and a purple variation, which denotes the color of the bases and pennants. All of the players in the set have at least two variations, while some also have a third. If you position each blanket so it’s like a baseball diamond, with the name being just above home plate, they each have the same layout. There are crossed bats at home plate, a baseball at first base, a catchers mask at second base and a glove at third base. The player is posed in the middle, with the city name in a pennant on the third base side and the league abbreviation in another pennant on the first base side. The backs of the blankets are blank sort of. You clearly see the reverse image of the front.

These aren’t highly collectible among card collectors and they aren’t rare either. There’s a Shoeless Joe Jackson in the set that is highly sought after because his cards aren’t plentiful, so people will settle for anything as a type card for him. Ty Cobb and Walter Johnson are also popular players in the set. The most popular player on the Pirates in the set is Hall of Famer Max Carey, though I know a Dots Miller collector who might disagree (it’s me, I’m the collector, and Miller is the only Felt Blanket that I own). While Viox wouldn’t have been considered a common when these were released, he is one now. Common players should run you about $25 to $30 each. There are two currently for Viox on Ebay (at the time of this writing), one of each variation. Both are listed for about twice the low-end estimate. That means if you want one now, you have to slightly overpay, but if you wait you can probably get a better deal.